Beachgoers have been scared by'sea ghosts,' which resemble humans and only appear from the ocean on rare occasions. 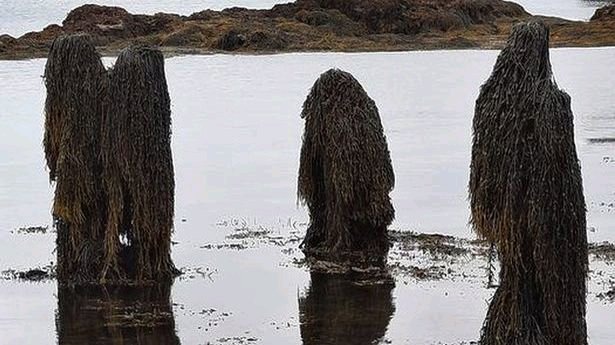 They arise only sporadically on Anglesey's northern coast, like eerie apparitions rising from the depths to terrify passers-by.

The cluster of individuals lies submerged beneath the Irish Sea for the majority of the time, only to resurface like marine Chewbaccas or the Crew of the Flying Dutchman.

Locals have known about the occurrence for some time and have been moderately upset by it, but a recent photograph of the marine ghouls has brought them to the attention of a wider public. 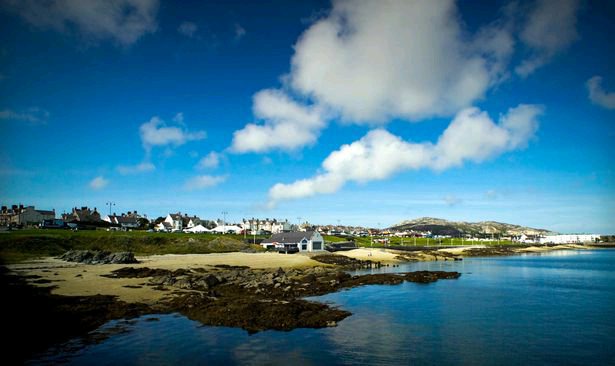 Every time they go past the spooky bunch, one individual told NorthWales Live that they make a double-take.

"I wouldn't want to view them on a dark evening, really creepy," another commented.

"Actually, that's rather scary.... especially when seen in the moonlight," a third said.

Craig Fairclough of Chester, a regular visitor to the area in his touring caravan, took the photo.

"I was walking the dog along Newry Beach when I noticed what appeared to be human bodies emerging from the ocean," he told North Wales Live.

"I thought it would make a good photograph, so I took out my phone."

"It was something I did on the spur of the moment." The photo was extensively shared after it was posted on Facebook, with many people commenting on how unique and atmospheric it appeared."

The 'ghouls' are actually a collection of old timber pilings from Holyhead's previous lifeboat ramp that have been coated with seaweed.

Nature has sculpted them into human forms that now stand as a testament to the bravery of Holyhead lifeboat crews since 1828.

Many ships have been caught out by the rugged coastline and strong currents in the dangerous shipping channels leading from Liverpool and Dublin over the years.

The station lost seven lifeboat crew members in the 50 years after the RNLI took over the station in 1855, as they battled to reach floundering vessels in the Irish Sea.

The ancient lifeboat ramp is located next to the Holyhead Maritime Museum, which opened in 1998 in the former lifeboat building — Wales' oldest surviving one.

Fans of MR James, the medievalist scholar best known for his ghost stories, have been intrigued by Craig's photograph of the museum's eerie neighbors.

One fan said on a fan forum that it indicated Wales was a location where it was simple to be scared.

"It's a lovely country, but these untamed landscapes have a profound sadness about them," he wrote.

"I believe this is a one-of-a-kind experience."

Content created and supplied by: Zanny (via Opera News )

Police Officer Shot and Killed by Armed Robbers in Cape Town, Another Wounded.

JubJub on Kelly Khumalo That She's Using Muti :All Men Dating Her Dies or Get Into Trouble, he Said.

Dj Zinhle and her boyfriend makes good music for their fans