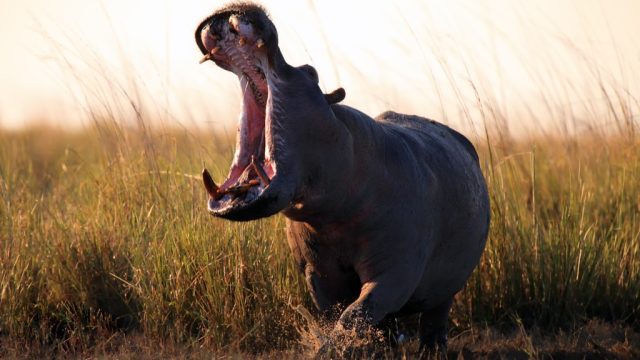 It can be a scary world out there. From 1,000-pound man-eating crocodiles to tiny parasite-carrying insects, humans face many threats in the natural world, especially when it comes to the planet's deadliest animals. Some are the kind of dramatic killers that make the evening news, like shark attacks or the occasional bear mauling. But just as often it's an attack at the hands (or fangs or stinger) of a creature that we wouldn't have imagined could bring sickness and death. Big and small, slow and lightning-quick, here are 30 of the most dangerous animals in the world. Watch out. If you they don't terrify you in the wild, they're bound to pop up in your nightmares. 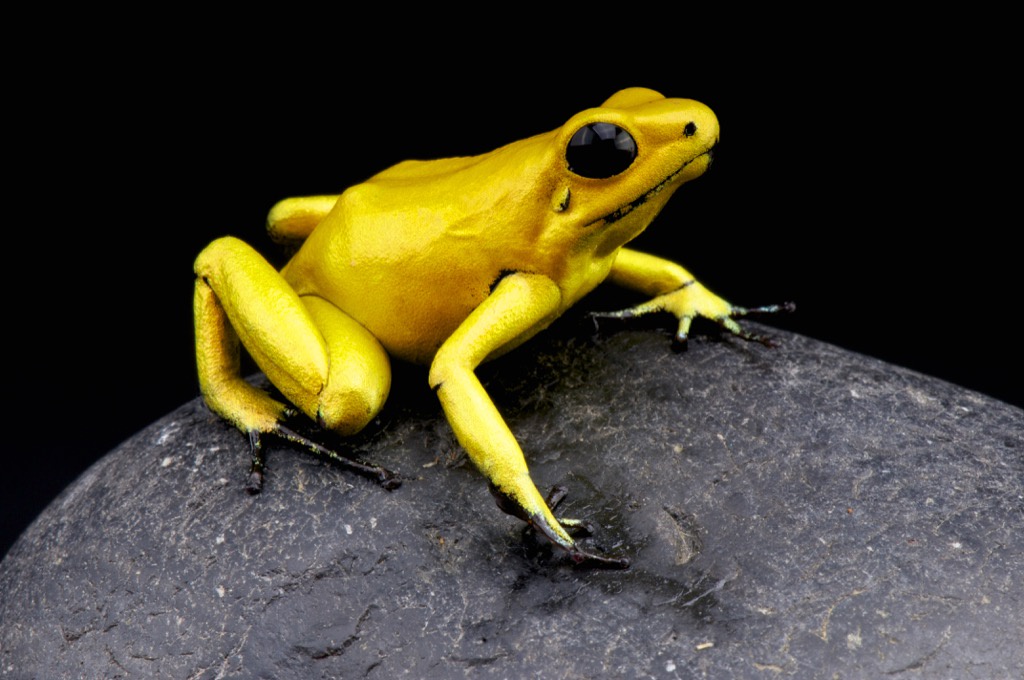 These brightly colored frogs are as beautiful as they are deadly. An inhabitant of the northern part of South America and measuring a mere two inches when fully grown, just one of these frogs packs enough poison (called batrachotoxin) to kill 10 grown men. Unlike venomous snakes or spiders, these creatures don't need to bite to kill; simply handling them can transfer poison to a person. 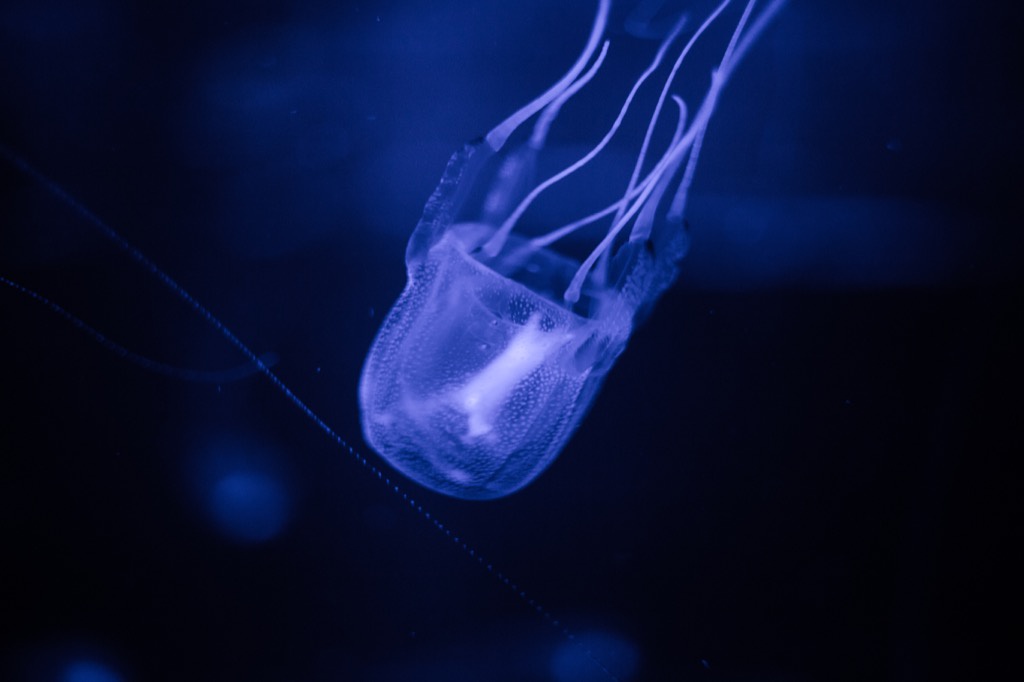 This many-tentacled killer floats off the coast of northern Australia and adjacent seas, and is easy for swimmers and surfers to miss as they head out into deep waters. The National Oceanic and Atmospheric Administration considers it the most venomous marine animal in the world, striking with thousands of stinging cells, known as nematocysts, that strike the victim's heart, nervous system, and skin cells all at once. No official death tallies exist, but the U.S. National Science Foundation estimates that, in just the Philippines, more than two dozen people die annually from box jellyfish stings; anecdotal evidence puts the global number at more than 100. It just might be one of the deadliest animals that you're incredibly likely to encounter. 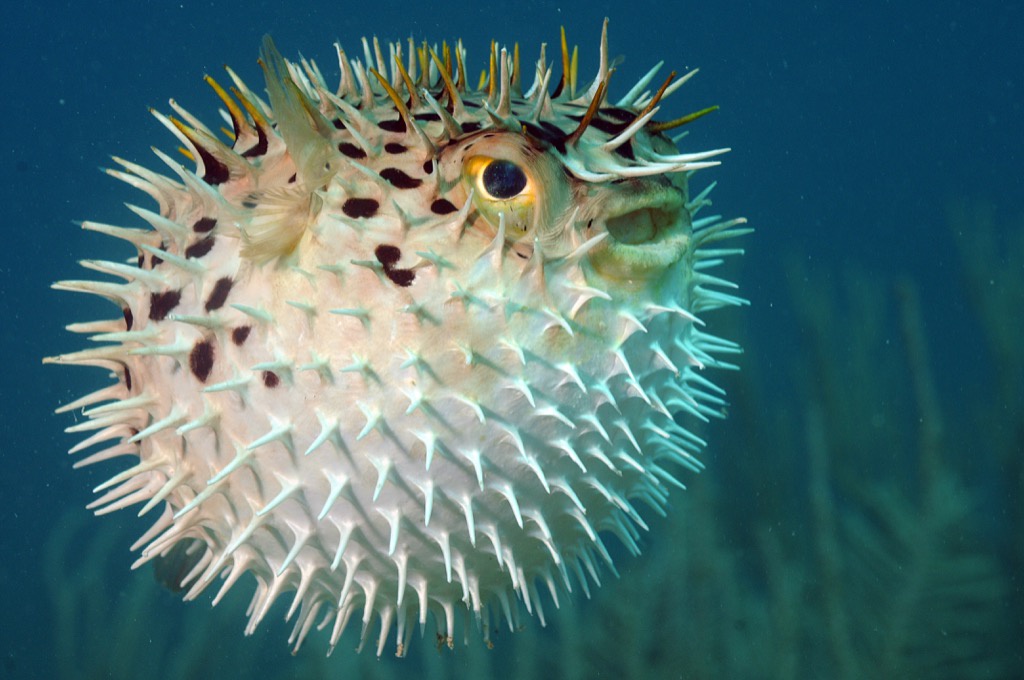 Also known as a pufferfish, these creatures have two impressive defense options: When threatened, they "inflate" their elastic stomachs with water, making them hard for a predator to get its jaws around them. But more devastating is the tetrodotoxin it carries, a poison that not only makes it taste terrible, but is deadly to those fish or humans who make the mistake of trying to eat it. The stuff is around 1,200 times more poisonous than cyanide; one blowfish is capable of killing 30 adult humans. 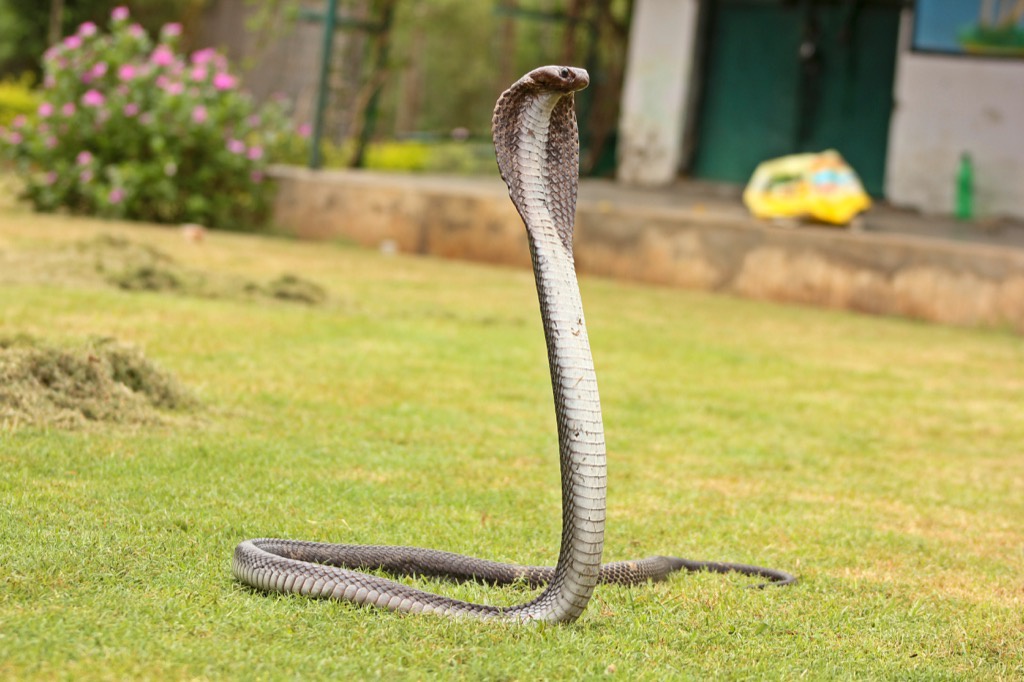 Native to Pakistan, Sri Lanka, and, as per its namesake, India, these hooded creatures are immediately recognizable and can grow five to six feet long. Their bites cause severe pain, swelling, and paralysis, with death occurring in as little as 15 minutes for those left untreated. But what's perhaps most dangerous about these creatures is their penchant for hunting near houses in rural areas, bringing them into frequent contact with humans.

Another of the deadliest animals in the "looks beautiful and harmless, is actually super deadly" category, these brown-and-white snails that live in the warm Caribbean and Hawaiian waters hide a set of harpoon-like "teeth" (actually called "radulae") packed with conotoxin, which wrecks its prey's nervous system, paralyzing it before it devours it. "For species of cone snail that hunt fish it is important to have a very fast-acting and powerful venom, because otherwise fish can easily escape from such a slow-moving predator," Ronald Jenner of the Natural History Museum in London told the BBC. 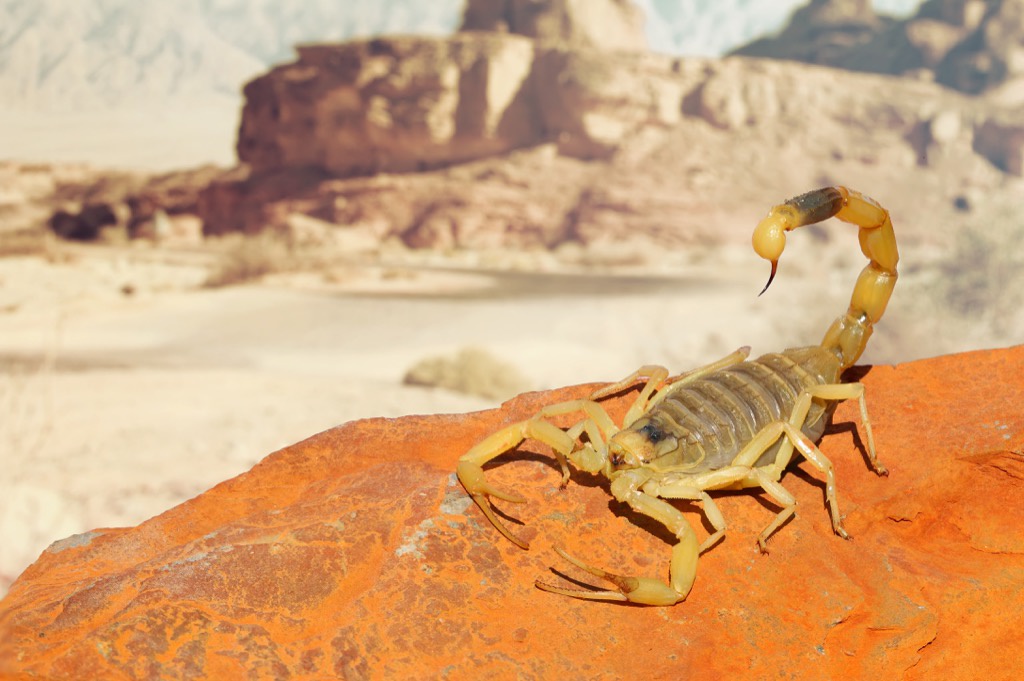 This scorpion is so lethal, it even has "death" in its name. Its highly toxic venom is matched by its incredibly fast lunge, which allows its poisoned stinger to whip over its head at 130 centimeters per second, striking its prey before it even knows what hit it. You'll find these nightmares in North Africa and dry regions of the Middle East. 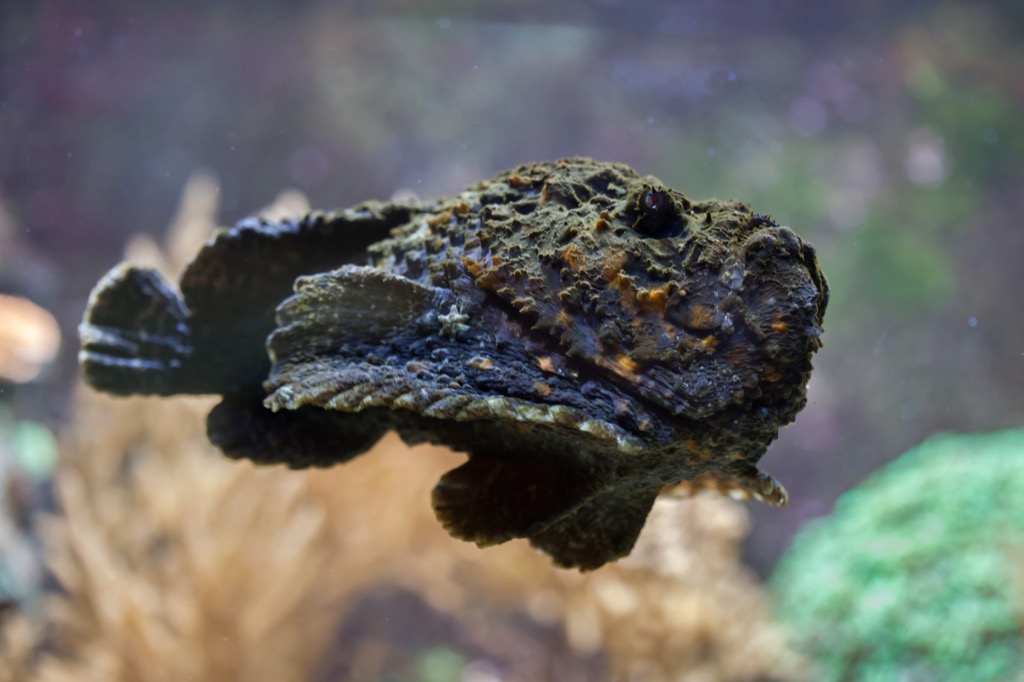 These ugly but hard-to-spot fish camouflage themselves as rocks on the ocean floor, snapping up their prey in their fast-moving jaws. Humans don't have to worry about getting eaten—but we do have to worry about the poison. Stepping on one of these causes swelling to quickly move through the body, leading to severe pain, difficulty breathing, muscle spasms, and, in extreme cases, paralysis and death. 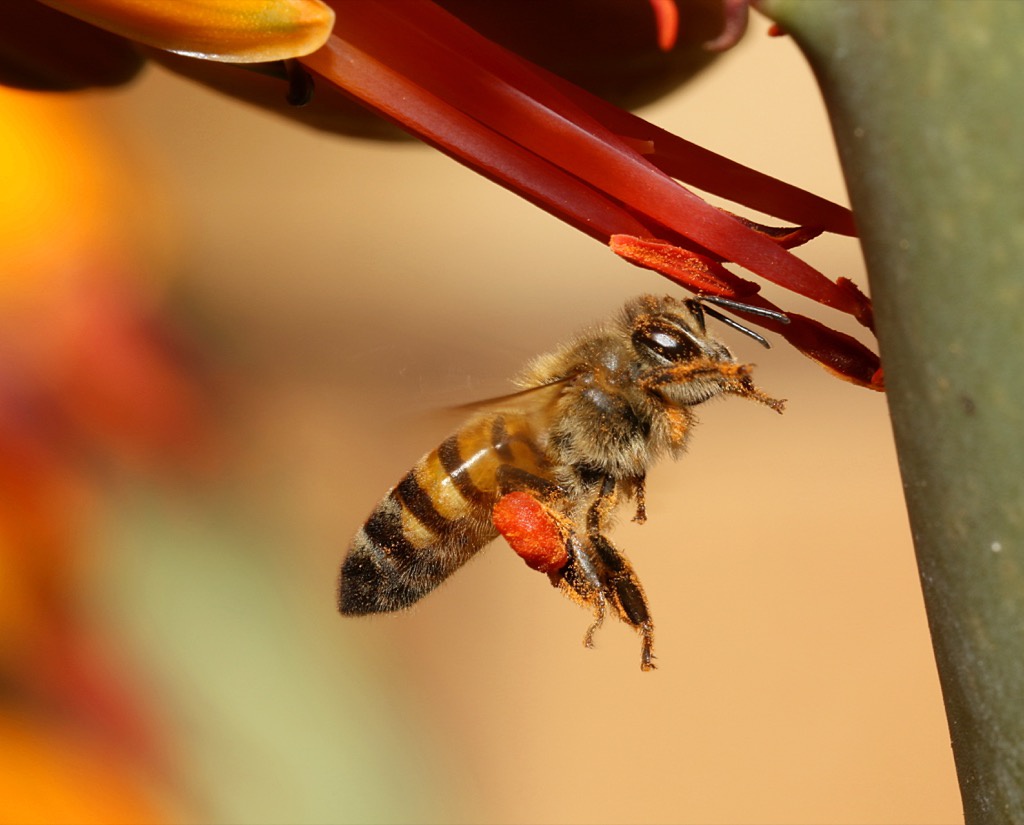 Honeybees generally keep to themselves, spreading pollen, manufacturing honey and not bothering humans unless humans bother them (seriously, your average backyard honeybee is not one of the most dangerous animals, and probably wants nothing to do with you). But Africanized honeybees, the result of a 1957 crossbreeding experiment gone wrong, are far more aggressive, likely to swarm, and willing to chase their victims for miles—and yes, when the chase ends, it's deadly. They're also growing increasingly common in the southern and western U.S. They're one of the deadliest animals that are also our own, human creation. 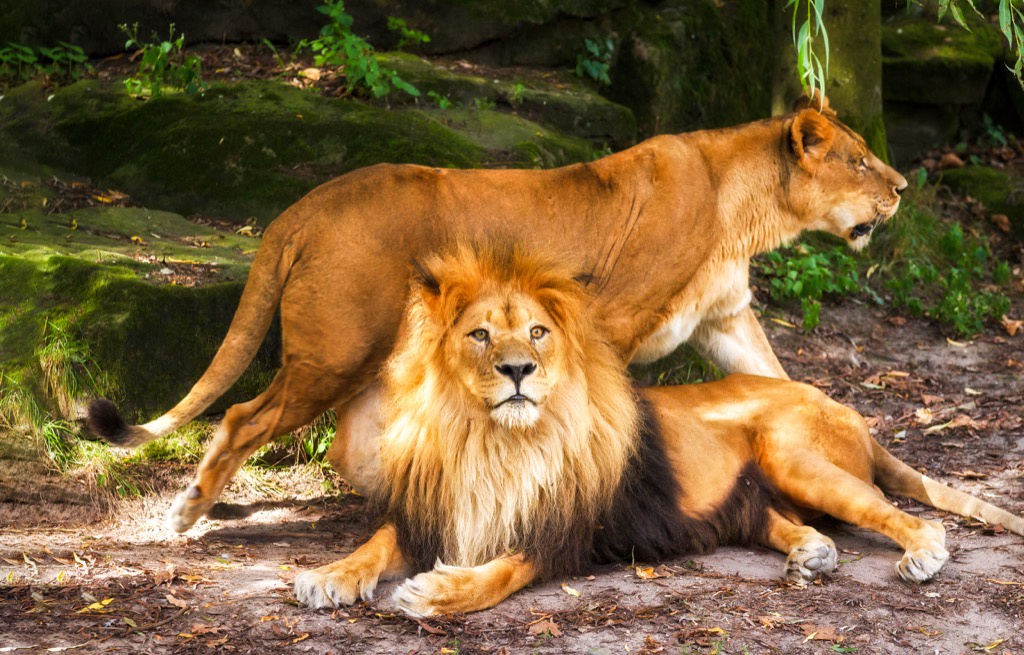 These sharp-toothed animals don't actually rack up as many kills as you might expect, but they are responsible for some serious damage to those humans unfortunate enough to cross them. According to estimates in Nature, they kill an average of 22 people a year—in Tazmania alone. 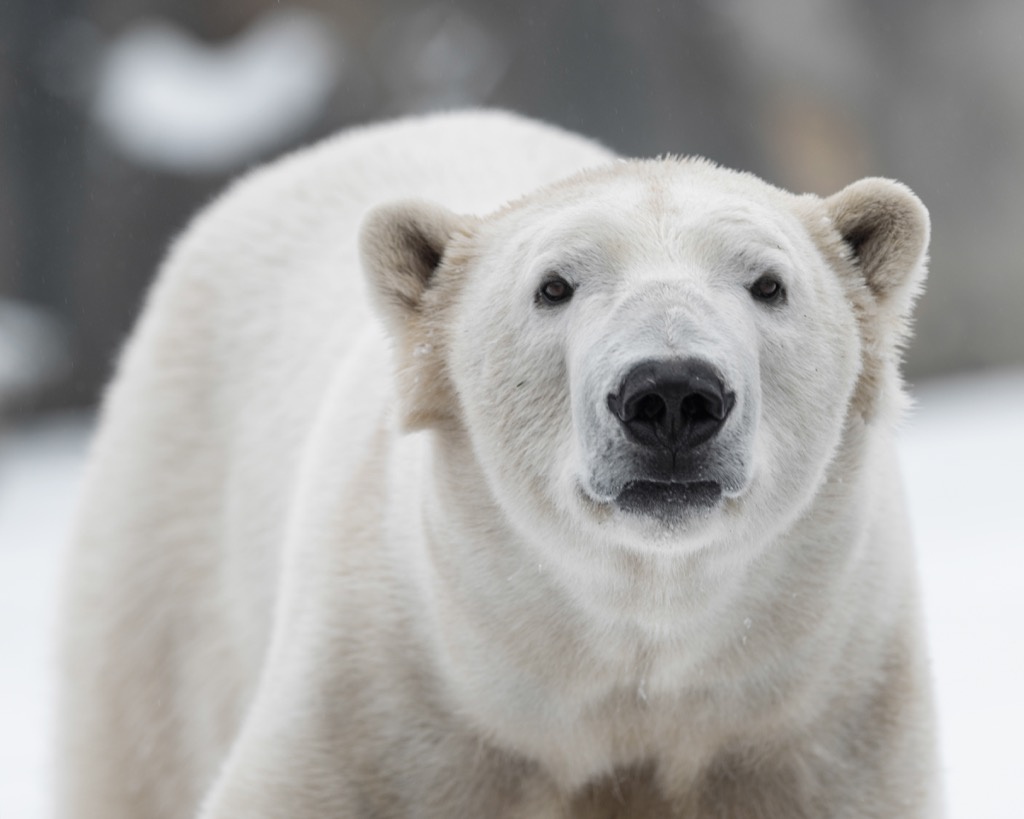 These hulks are the largest carnivore in the world and have no natural predators, outside of humans. While they tend to keep to themselves unless harassed or hungry, when they do attack, the results are brutal and deadly. Recent studies have found that polar bears' aggression toward humans is growing, potentially due to climate change forcing them closer to the humans in their midst.