By Mavanyisi (self media writer) | 4 months ago 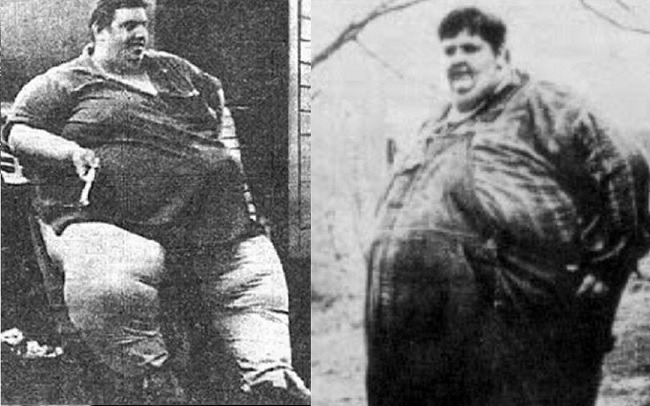 If you have an inquisitive mind, you will come across various interesting facts that make up the Guinness World Records during your lifetime. Some of these records include the world's skinniest, shortest, or heaviest man, which was achieved by Jon Brower Minnoch, a Bainbridge-Island native who is still the heaviest human being ever documented. Minnoch was diagnosed with enormous widespread edema at a young age, which manifested itself in an unremitting increase in his body weight. At the time of his birth in September 1941, no other human had ever been known to be born with such a large weight. Even the current largest man, Mexican Juan Pedro Franco, weights 595 kg, compared to Minnoch's top weight of 635 kg.

Jon Brower Minnoch, an American who weighed a huge 635 kg and was born on September 29, 1941, is known as the largest individual ever (100 stone or 1,400 lb). While it has sort of been his legacy, many people are still fascinated by how he lived.

1. He lacked any kind of formal education.

It's worth noting that Jon Brower's size did not prevent him from pursuing and completing his education; there are no records of his being homeschooled. Unfortunately, at the age of 12, he weighed around 294 pounds (133 kilograms). This is an extremely unusual weight for a child of his age, and to put it in perspective, he was about a hundred pounds heavier than a newborn elephant.

2. For Jon Brower Minnoch, living was a Herculean task.

Living was difficult for Jon and necessitated a lot of work. It took almost a dozen firemen and rescue people to take him on a stretcher on multiple times when he needed to go to the hospital. It was that difficult for him to get around. Also, changing his linens and sheets was time-consuming, as it required around thirteen people to roll him across the two beds he occupied. His disability prevented him from going wherever he wanted; he was either confined to his home or to hospital beds.

3. However, his illness did not prevent him from finding love.

Despite his obese nature, which limited his movements, some of the incidents surrounding his life demonstrated how simple and freely he desired to live. He married his beloved Jeannette in 1978, and they had two beautiful children together till his death in the early hours of September 10, 1983. Is this, however, everything he asked for or imagined?

4. Jon and Jeannette Break the Guinness Book of World Records

When Jon and Jeannette set the Guinness World Record for the largest weight difference between a married couple in 1978, it came as no surprise. Jon weighed around 300 kg, whereas his wife weighed only 50 kg. As previously noted, their relationship lasted until Jon's death in 1983. Jeannette appeared to be a caring wife who stood with Jon through thick and thin, even in his final days. His death is claimed to have broken the mother of two children's hearts.

5. Jon's Record Has Not Been Broken

6. He has the second-largest documented human weight loss.

Minnoch's issues with his weight began to set in other health challenges once he was diagnosed with edema. As a result, he went to the University of Washington Medical Center in Seattle for checkups on a regular basis. By the age of 22, he weighed 500 pounds (230 kilograms), and by the age of 36, he was hospitalized due to extracellular fluid retention in his body, which caused cardiac and respiratory organ failure.

All seemed to be well for the young man who was discharged from the hospital after losing around 1000 kg of weight following months of treatment and strict devotion to a rigid diet. He was said to have shed 924 pounds, according to records (419 kg or 66 st). Until November 2017, when Khalid bin Mohsen Shaari was reported to have shed 542 kilograms, it was the biggest weight loss ever documented.

Jon set his highest weight loss record after 16 months and a diet of only 1,200 calories per day. In 1981, he suffered a setback in his health, and the man who was previously a cab driver gained over 89 kilograms. When the University of Washington Medical Center was unable to continue his therapy, it was stopped, and Jon Brower Minnoch succumbed to edema 23 months later. He died while he was only 41 years old.

Content created and supplied by: Mavanyisi (via Opera News )