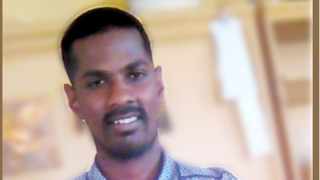 Brandon Pillay died after being stung by bees in Newlands West, Durban. I Supplied.

The Durban family mourns the loss of a son who died after being stung by a swarm of bees.

A DURBAN family was emotionally distraught following the death of their son who was stung by a swarm of bees on Wednesday.

Brandon Marimuthu, 31, of Newlands West, died in hospital on Thursday. Several others were recovering at home after a swarm of bees attacked them on Barondale Road.

He had been admitted to King Dinuzulu hospital for bee stings – the second bee attack in a week in Durban.

Mentally challenged, Marimuthu and his mother Vassie Marimuthu were walking home when the bees attacked. They screamed in pain and ran into a housing complex for assistance.

The beehive was removed by the bee rescue team from the wall of a house in Newlands West, Durban. I Supplied.

Bee sting survivor Shanti Lalchand, 63, who lives in the complex across the road from where the incident took place, said Marimuthu ran to her home for help. When she opened her door she was also stung by “more than 200 bees”.

In another related story

Six people were stung by a swarm of bees in Ballito, paramedics say two are critical

“The three of us were running around frantically in the parking lot trying to get rid of the bees. They were buzzing about and got stuck in my hair. People stood by and watched. People were helpless. I took my neighbor’s towel off the line and wrapped myself in it to fend off the bees. They didn’t leave. After 45 minutes of trying to get rid of them, I went to my flat and had a cold shower which assisted me.”

Lalchand had pictures of dead bees scattered throughout her lounge, bathroom, and hospital floor. She was admitted to the hospital for two days. Her face had swelled up and she had diarrhea and vomiting.

A security guard points to the grass verge where a swarm of bees stung Newlands West residents. The guard was also stung when he tried to assist them in Barondale Road in Newlands West Durban.

A close relative of the family, who did not want to be named, said her son rushed to the scene when he read a neighborhood watch group message on WhatsApp calling for assistance. Many others who volunteered to assist were also stung by the bees.

“Someone gave them a carpet to roll themselves in. They even set alight grass and the carpet so the smoke could chase the bees away. Both were in immense pain. Brandon had severe diarrhea and vomiting.”

His sister Elaine Marimuthu said her mother was emotionally distraught and also recovering from the bee stings.

Brandon will be cremated at the Clare Estate Crematorium on Tuesday. His funeral will take place at a church on Oakdale Road in Newlands West.

Neighbors described Pillay as a loving person. Some are still in shock.

The homeowner, who declined to be named for fear of being victimized, said he was sweeping his yard when he saw the bees. His family was also stung by the bees. He was unsure what caused the bees to react. Before this, he was not aware of the beehive inside a concrete pillar in his wall. A specialist bee remover removed the bees.

IPSS Medical Rescue’s Paul Herbst said six people were stung by bees in Ballito on Thursday. Two were in critical condition. Workers mowing the lawn had disrupted a beehive.