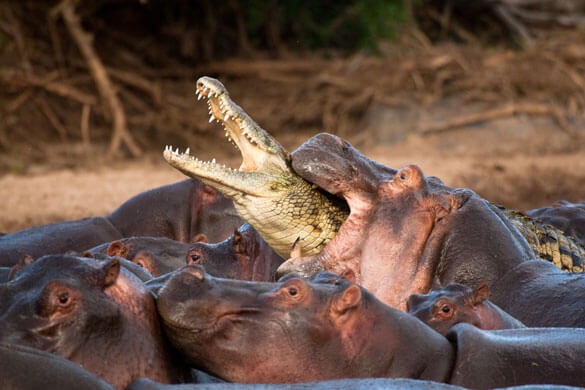 This sneaky critter is considered Africa’s deadliest snake, being responsible for almost 32,000 human fatalities in a year. Because of its wide population distribution, powerful venom, and extremely puzzling colour patterns, the puff adder is said to kill more people than any other snake in Africa (but is largely outranked by Australia’s deadly reptile collection).

Puff adders can grow up to 1 metre in length, and are solidly built with a thick girth. Their colour patten differs depending on their location and habitat, which extend throughout the entire African continent (except for lush rainforests and deserts). The puff adder boasts big fangs, with venom powerful enough to kill a grown man with a single bite. They depend on camouflage for protection and, if approached, will simply lie still – which eventually leads to people stepping on them and getting bitten.

Though miniscule compared to the other deadly animals to appear on this list, the mosquito is one of Africa’s most dangerous creatures – responsible for the fatalities of approximately one million people annually. As if that weren’t enough, they also transfer diseases to around more than 70 million people yearly.

The reason why the mosquito is so dangerous is because it carries the virus that causes Malaria, one of the deadliest diseases in the world. Malaria is only spread by the female Anopheles mosquitos, which are most active during dawn and dusk. However, the good news is that you can easily prepare for the virus with vaccinations, and you can ward off mosquitos entirely with simple lotions and sprays. There is also a Malaria vaccine on the horizon, hoped to be released in 2015, which is said to be able to reduce deaths from this disease by up to 75%.

Luckily we can assure you that a safari in Africa is possible without the threat of malaria. You can enjoy camping in the wilderness in South Africa or Namibia while not having to stress about vaccines or deadly mosquitos.

These majestic animals are a pleasure to watch from afar, as they peacefully surface calm waters. However, in reality they might not be as ‘gentle’ as they seem. Hippos are said to be responsible for the deaths of around 3,000 people per year in Africa. Many of them actively protect and defend their territories along the banks of rivers and lakes.

Female hippos can also act out with extreme aggression if they sense a threat coming between them and their babies, who stay back in the water whilst she feeds on shore. The attributes that make hippos so dangerous are their running speeds of 32 kilometres/hour and their 50 centimetre canines within their massive jaws. And if that doesn’t show how powerful enough they are, their closest living relative is the whale, so be sure to keep a safe distance at all times!

Though these king cats don’t typically attack humans, there are instances where they have. Mozambican refugees frequently crossing Kruger National Park in South Africa at night are often attacked and eaten by lions, who are said to be responsible for the deaths of at least ten people a year (in the Kruger alone).

In Tanzania, it has been reported that these powerful creatures kill up to 70 people a year. Lions are the only cats to live in groups, and African Lions can reach weights of up to half a ton! The most renowned incident of man-eating lions happened during the constructions of the Kenya-Uganda railroad in 1898, where a pair of male lions began attacking railway workers, killing several over the duration of nine months. The reasons for these attacks are still unknown, or have yet to be explained.

Crocodiles, though majestic to watch when gliding through waters or basking in the sun, can look downright ominous when on the lookout for prey. They hover underwater, with only their nostrils above the surface, waiting for something to come to the water’s edge for a drink, then with an incredible burst of speed, launches itself up and clamps its victim in its vice-like jaws, dragging them back under the water to drown.

Crocodiles boast the strongest bite in the African Kingdom at up to 2,267 kg’s per square centimetre, and kill approximately 3,000 people per year, with fatal attacks attributed to the Nile and Saltwater crocodiles. However, most human fatalities only occur when people are washing/collecting food near riverbanks or lake shores, or when fishermen glide their boats in and out of the water.

Known in Africa as one of the Big Five, the African Buffalo is widely considered a very dangerous animal, killing approximately 200 people each year. These giant creatures can weigh up to 1.5 tons, and can grow up to 1.7 metres in height, and 2.7 metres in length. When threatened, use their razor sharp horns on their heads to attack. Buffalos have been reported to kill more people than they do animals, though the claim is also made of hippos and crocodiles. They usually travel in intimidating mobs, but are one of the few animals in Africa that, if alone and injured, will actively stalk and kill humans. Buffalos are still widely pursued by trophy hunters in various parts of the continent.

It’s extremely unlikely that you’ll come into contact with an elephant outside of a protected game reserve whilst travelling through Africa, but it’s worth noting that these magnificent beasts have impressive power and lethal strength. They can reach weights of up to around 7,000 kg’s, giving them fatal skull-crushing, stomping, and trampling abilities.

African Elephants, particularly older bulls and young males, can be aggressive even when not provoked, and with the creatures killing up to 500 people worldwide each year, most fatalities happen by victims being trampled to death. In areas where poaching still occurs, and/or the elephants’ habitats are in danger, the animals are much more aggressive. Be sure to be extra cautious around elephants with babies, as just like humans, they will protect their young at all costs.

Whilst both black and white rhinos continue to fight for their survival, their numbers are plummeting at astonishing rates due to poaching. This is a battle many animal conservationists are currently fighting, but it is always worth keeping your wits about you when spotting a rhino in the wild. These stocky animals are rather bad-tempered and extremely short-sighted, and won’t hesitate to charge anything they perceive to be a threat. Adult rhinos can weigh up to 2,800 kg’s and can run up to speeds of about 64 km/per hour for short durations at a time, so always be sure to keep your distance.

The black mamba is one of the deadliest snakes in Africa, and are the most feared in East, Central and Southern Africa. They are the biggest venomous snakes in the entire continent, with adults reaching approximately 2.5 metres in length, and can reach speeds of up to 20 km/per hour.

Mambas are extremely aggressive when cornered and won’t hesitate to attack. ‘Black Mambas’ are actually not black at all, but are rather brown/olive skinned, with inky black mouths that are shown when threatened. They live in savannah, scrub, tree hollow, and occasionally in peoples’ homes! When a black mamba comes across prey, it can strike up to twelve times in a single attack, with powerful enough venom to kill a dozen men within an hour. Without anti-venom, the snake’s bite is always fatal.

Sharks are known as the biggest predatory fishes in the world, but have no natural instinct to attack humans (as Hollywood might have made people believe). In fact, if they do attack a human it’s usually only a bite to ‘test’, but that bite is typically very serious.

This is because the shark charges its prey at remarkable speed, takes one massive chunk out of it, drags the victim underwater, and then backs off to allow the victim to bleed to death before devouring it. However, it must be kept in mind that though these animals swimming alongside the shores of Africa are extremely powerful and capable of massive devastation, attacks on humans are rather rare, with only several a year in Africa (less than a quarter of which prove fatal). In general, more people are killed by bee stings than sharks.