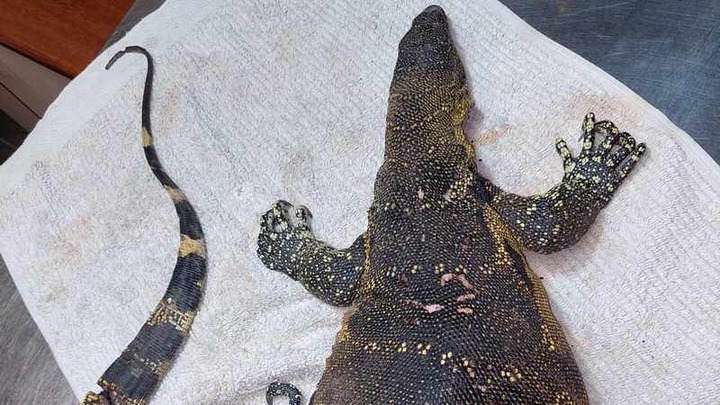 Scrolling through Facebook, I came across quite a sad story. Local Durban snake-catcher Nick Evans shared his heartbreaking experience of not being able to rescue a Nile monitor lizard, which was found in the Westville area of Durban.

Evans said, in a Facebook post, that he received a call from a concerned resident in Dawncliffe, Westville, regarding a large Nile monitor lizard lying next to a bush, near the resident's pool. The home was quite close to a ravine, which is where the lizard most likely came from. Evans advised the homeowner to leave it be, keep any dogs away, and that it should move on soon, as these are relatively common in the area.

The resident called Evans back a while later, to advise that the lizard had not moved a muscle and was still lying in the same spot. Concerned, Evans contacted a colleague, another local reptile rescuer, Nick Saunders, to capture the animal, as Evans was on another call elsewhere.

Upon arrival, Saunders, expecting the usual whipping-tail retaliation from the monitor lizard, attempted to catch it but was surprised to find that the lizard was mostly unresponsive, even while being handled.

Evans said that he was surprised to see how bloated the lizard was, and they both agreed that it had to be pregnant. He said that, in his experience, he had never witnessed a Nile monitor Lizard survive a dog attack, and this case was no different.

Evans transported the reptile to the resident wildlife vet, at the uShaka Marine World Dangerous Creatures at the SAAMBR (South African Association for Marine Biological Research). X-rays revealed that the monitor lizard suffered multiple broken ribs and extensive internal injuries. Unfortunately, she did not make it.

“She was a mother to be. We were all so, so desperate for her to survive or at least lay her eggs before passing, but she didn’t. We watched her take her last breath,” an emotional Evans said.

The x-ray also showed that the lizard was indeed quite pregnant, showing a mass of eggs. Once the post-mortem was completed, she was found to have been carrying 39 eggs.

Evans said: “Although many of these babies would have been eaten by predators, some would have survived and could have gone on to sustain the population.”

He said that while this was a devastating occurrence, the data and knowledge gathered from this case will help future rescuers, like himself and wildlife vets, to better understand how to assist.

Evans concluded, saying that “these remarkable lizards are getting hammered in and around Durban. They are being killed by dogs, run over by vehicles, and killed by people for food and the traditional medicine trade.”

Nine adults arrested for murdering a teenager in the bushes