Glimpses inside the biography of the talented African actress 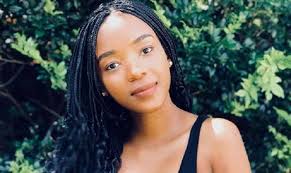 Actress Ama Qamata plays the role of Buhle in Gomora and Puleng Khumalo in the Netflix drama series Blood and Water; she is an entrepreneur, her net worth has been revealed. In the Mzansi Magic telenovela Gomora , the Buhle character is an uptown girl whose life took a U-turn after her father Mbongeni Ndaba _ the role played by Themba Ndaba died in a botched hijacking. Together with her mother Thathi and brother Langa,they moved to her maternal grandmother's house in Gomora Township.Having grown up in a mansion with everything money can buy .Buhle's life in Gomora has been a nightmare Dominance over her peers .including her brother.,has been evident over the Gomora storyline

Born on 2 September 1998 in Cala Village ,Eastern cape,Ama moved to Joburg with her family at three years of age.She discovered her acting passion and talent in primary school,Where she played on different school production and won several accolades.Buhle attended Reddam House Bedfordshire College and dropped out from the University of Cape Town in her second year, Where she was studying for a Degree in Theatre and Performance.

At 17, Ama Qamata debuted our screen as Naledi in SABC 1 comedy My Perfect Family;she joined the Gomora in 2020 as the main cast.

Despite dropping out of school and having an acting qualification,she scored a role on the award-winning Netflix series Blood and Wate,Where she plays the character of Puleng.Ama Qamata scored a fortune from the Blood and Water role; she has casting director Kutlwano Ditsele to thank who took her from Gomora to Blood and Water.

Gugulethu residents up in arms over eviction of community crèche