By Amari (self media writer) | 2 months ago

Tito Mboweni recently caused a stir on social media after posting a picture with Sizwe Dhlomo. As most people are aware that ever since Tito decided to retire from his post he has been active on social media. Most of the time he would be out and about enjoying his free time. In his recent tweet, he shared a picture while outdoors with Sizwe Dhlomo. 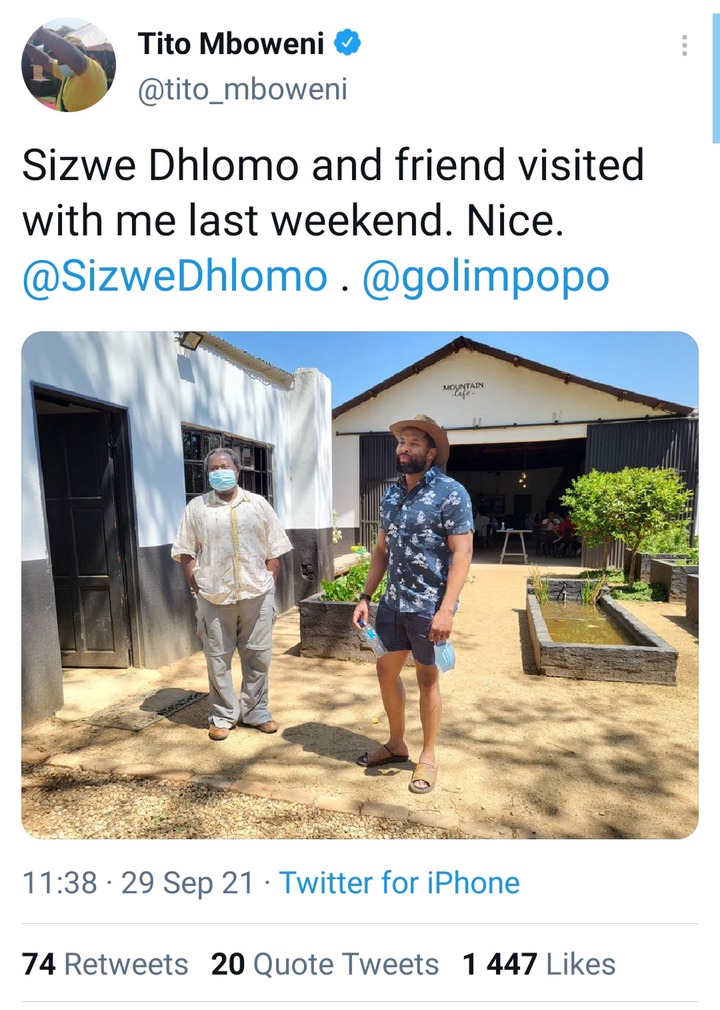 He mentioned that Sizwe and his friend paid him a visit. People couldn't help but notice that both of them had similar shoes in terms of color. Even though Tito was wearing his famous boots, people thought it was hilarious because Sizwe was wearing sandals which was brown aswell. Some were curious about the other friend who he didn't mention by name. See more of people's reactions down below;

﻿Sizwe Dhlomo (born 21 June 1983) is a South African radio and television presenter. He is a presenter at Radio 702 and shot into the limelight after he won the MTV Base Talent Contest becoming MTV Base's first video jockey. He is among the list of highest-paid celebrities in South Africa.

Tito Titus Mboweni is a South African politician who served as Minister of Finance of South Africa in the government of President Cyril Ramaphosa from 2018 to 2021. Mboweni was the eighth Governor of the South African Reserve Bank and the first Black South African to hold the post. Wikipedia

Content created and supplied by: Amari (via Opera News )

The Throne Actress flaunts mzanzi with her breathtaking fashion sense and remarkable magnificence.

Opinion: Two Chelsea Players That Can Bench Kante In 3-4-3 Formation

Is cyberbullying becoming the new pandemic? Celebs share their experiences

Here is what to do if you have flu-like symptoms

12 Things women will never dare to tell you