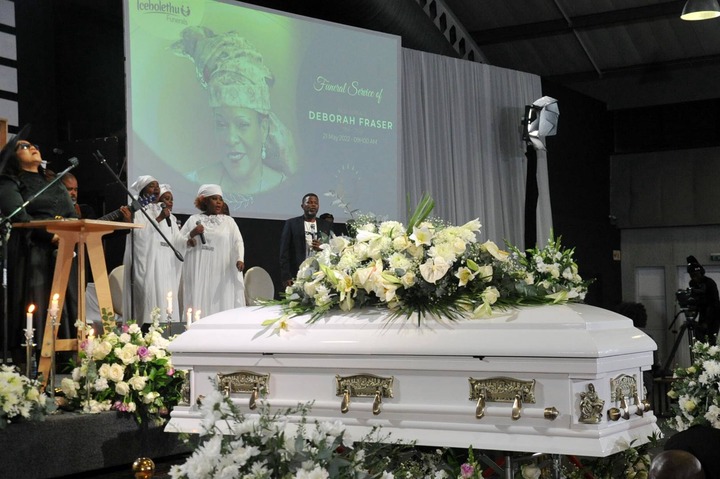 The casket of Deborah Fraser was present at the funeral ceremony for her.

Lala Kahle Cemetery in Hillcrest, which is located west of Durban, was going to be the last resting place for Deborah.

However, members of the family, friends, and artists were requested to refrain from visiting the grave.

According to the family spokesman Nontando Mafisa, who spoke to the Daily Sun on behalf of the family, the family has not given her permission to specify when Deborah will be buried.

The People's Paper was informed by sources with strong ties to the family that the family intended to bury her if the flooding stopped.

According to the South African Weather Service, "at the moment they are advising Monday as they expect the floods will cease."

The information provided by the source said that "but everything will be regulated by the weather since they can't simply toss the casket in a hole with water and muck."

At the burial ceremony for Deborah, which was conducted at The Station Avenue, her uncle Vuka Shabalala said that the family was in a great deal of anguish because they had hoped that she would get well and return to them in the future.

"She was far too young to have left us in such a manner. We were saddened by her passing, but we know that we are not alone in our grief since her friends and followers have also suffered this loss," he said.

"She was involved in the release of 13 albums with us. The new album that she had just completed recording in March was something that we were looking forward to releasing. It is a terrible loss that she won't be able to celebrate this momentous occasion with us.

"For solace, she left us with her last message in this audio; she also bade us goodbye, and Deborah reminds us that there is a cost associated with being faithful.

According to what she claimed, "she was a lady of integrity and an honest straight-talker."

Bishop Benjamin Dube, a well-known gospel musician, said that it seemed as if Deborah was aware that she didn't have much time.

"After working with Rebecca Malope and Sipho Makhabane, I addressed Deborah, and she gave the impression that she wanted the project to go forward as rapidly as possible, as if she was aware that she didn't have enough time.

Dube went on to say that Deborah was unquestionably a part of the genetic makeup of gospel music, and that "you wouldn't talk about gospel without mentioning her name."