South African football player, reality television sensation, and musician Andile Mpisane was born on March 15, 2001. He is well known for appearing in the program Kwa Mam'Mkhize with his mother and older sibling. He participates in football as a midfielder for the KwaZulu Natal team Royal Eagles.

Football player Andile Mpisane represents Royal Eagles F. C. in the National First Division as a midfielder. Since he was a little boy, he has always enjoyed playing football. Because of Andile's ardor, his mother bought the football team for him. He joined the football team in July 2018 and has been participating ever then.

Andile is also an actor; he can be seen on the reality show Kwa Mam'Mkhize. The Mpisane family flaunts their opulent lifestyle on the show that airs on Mzansi Magic every Thursday at 20:00. He also sings, and in 2019 he debuted his first song. In addition to acting

The single, whose name is Uyangqhaska, was warmly accepted by music fans. Andile has always had the support of Shawn Mpisane, who provided him one million Rand to film the music video for his song Umcimbi. The film was recorded aboard a yacht at the Mpisane family's La Lucia residence in Durban, Cape Town.

On the video-sharing website YouTube, the video has received over a million views. In Umhlanga, Kwazulu Natal, Andile Mpisane and his mother Shawn Mkhize opened the unisex spa and salon Royal AM Luxury & Grooming Pampering Lounge.

Tamia Louw, a South African model, is happily married to Andile Mpisane. The couple started their marriage in December 2021, and they recently welcomed a child.

People were put off when a post he once posted was reposted when he says " being with a woman who appreciates the little things you do for her it's a blessing" people were left confused with what little things his talking about since he comes from a rich family, this caused a stir on social media, someone claiming they are literally wearing R200k, I guess the little he talks about its way different to our own. 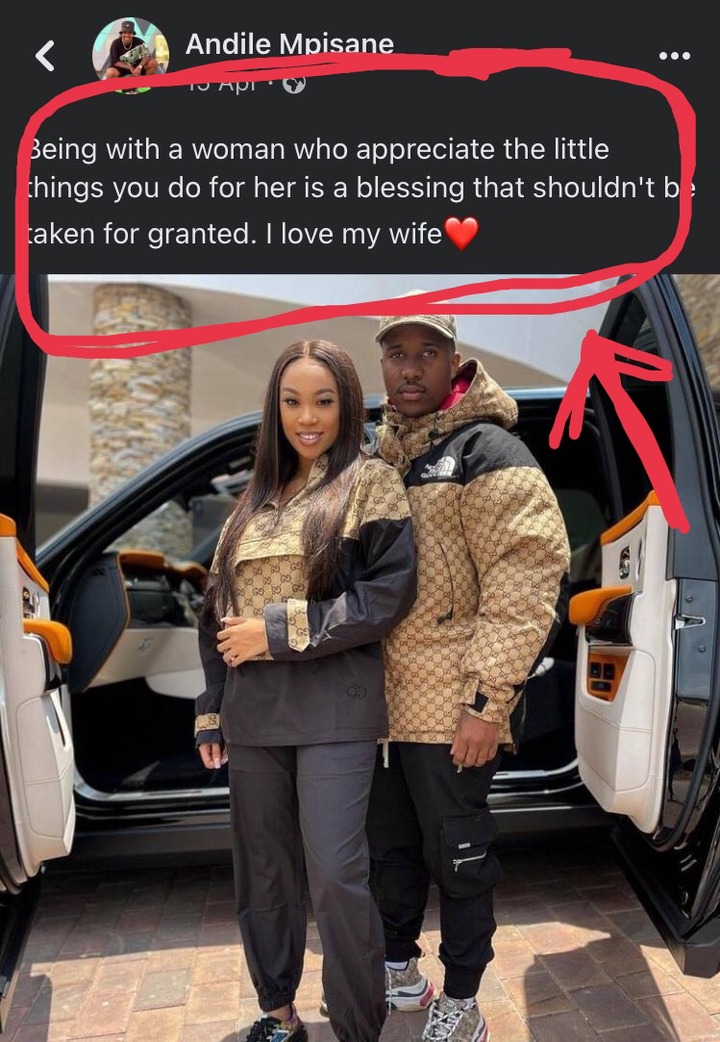