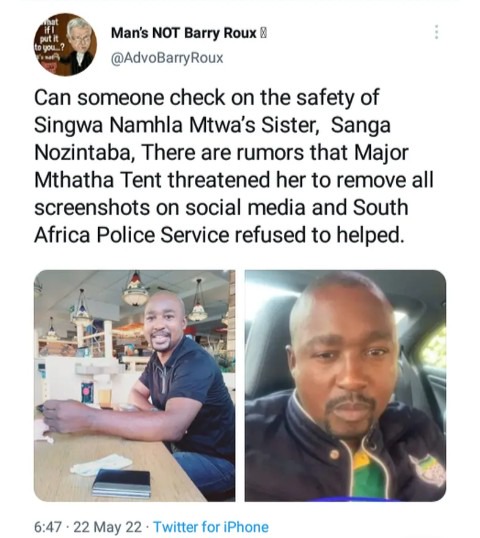 South Africans wants the justice for the late Namhla who was shot nine times at her home and her allegedly killer, Major Bhakizulu was granted fifty thousand bail and people have been saying , the bail must be reversed as Major deserves to be in prison.

Namhla's abuse story came after her sister leaked all the screenshots between her late sister and the accused on social media and also revealed what a vile, controlling and callous man Major is.

In the long texts on social media, Namhla's sister also revealed how her sister was forced to terminate two of her pregnancies by Major and how Major told her sister that, he will not have a child with someone who doesn't have a medical aid and the deceased was still an intern then.

Mthatha residents have vowed to hold a peaceful protest demanding justice to be served.

While people are pushing the justice to be served, others are worried about the deceased sister after it is alleged that, the accused have ordered her to take down the screenshots on social media.

Carol Bouwer left fans dumbstruck with her recent post showing off her beauty.

Nhlanhla Lux Sends A Message To South Africans. He Says We Must Encourage Our Kids To Do This.

Pretty's mother kicked her out , see why.