9 Celebrities who are friends with their exes' new partners

Gwenyth Paltrow used to be married to Chris Martin, who now dates Dakota Johnson. Seeing your ex move on with someone new can be painful, but it doesn't mean you can't all get along. 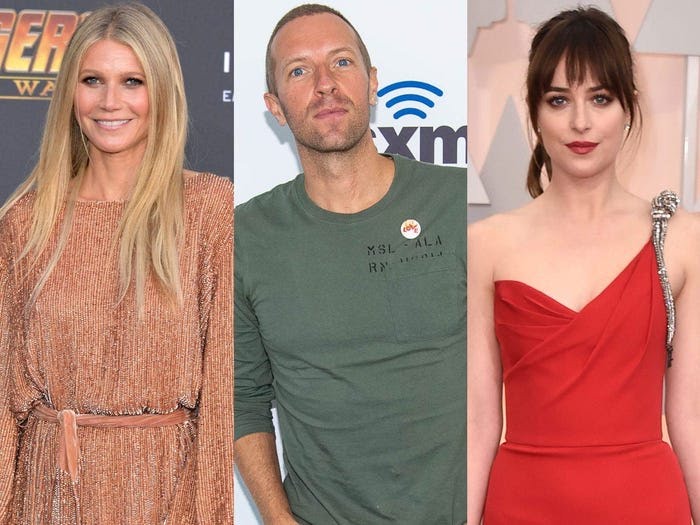 These 8 celebrities have made it a point to befriend their exes' new partners.

1. Lenny Kravitz said he loved Jason Momoa from the moment they met 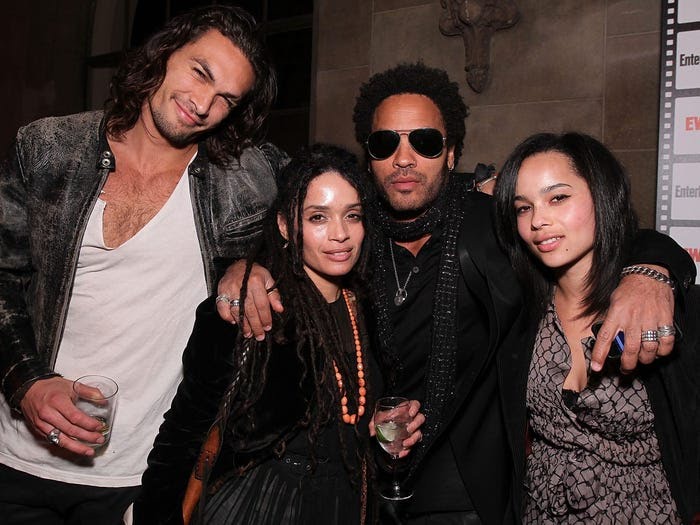 Zoë Kravitz and Lisa Bonet were married from 1987 to 1993, and they share daughter Zoë. Bonet has been with "Aquaman" star Jason Momoa since 2005 and now they're one big blended family.

Kravitz and Momoa frequently call each other brother and support each other in their careers. Kravitz was there to support Momoa when he hosted "SNL," and Momoa bought Kravitz an "amazing bone skull ring."

"I met Jason when they got together and I love him, he loves my kid and I love their kids and we're all one big family. It's beautiful," Kravitz told People in February 2019. 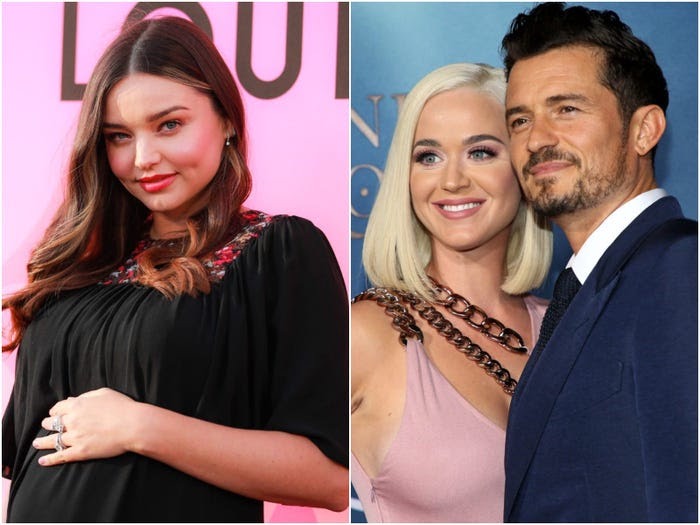 Miranda Kerr and Orlando Bloom were together from 2007 to 2013, and they have a son, Flynn, together. Now, Kerr is married to Snapchat founder Evan Spiegel, while Bloom is engaged to Perry.

During a November 2020 episode of Drew Barrymore's talk show, Kerr talked about her love for Perry.

"I adore Katy and I just feel so happy that Orlando has found someone that makes his heart so happy, because at the end of the day, for Flynn to have a happy father and a happy mother is just the most important thing," Kerr said. "I'm just so grateful that Orlando and Katy found each other and I'm so grateful that I found my incredible husband and just that we all really respect each other."

In April 2021, the two women went on Instagram Live together to talk about motherhood and their relationship.

"One of the great things about being close to Miranda is I get to try out all her products, especially when her son comes home with them in his backpack," Perry joked.

3. Drew Barrymore said she feels like she "won the lottery" with Alexandra Michler 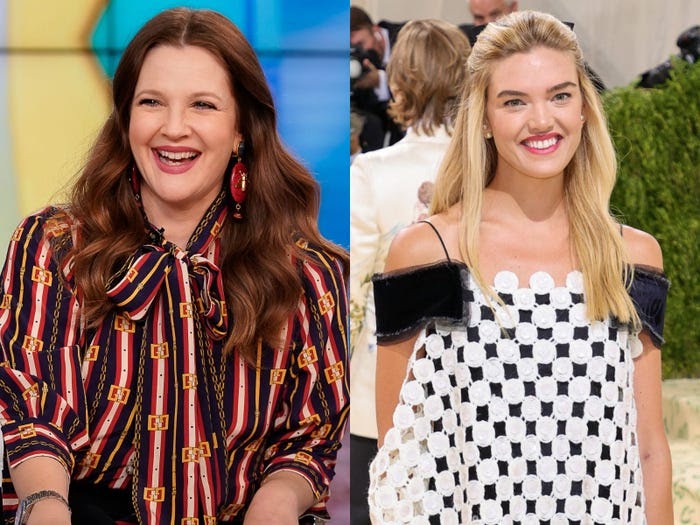 Alexandra Michler married Will Kopelman in September 2021, five years after Barrymore and Kopelman split. Kopelman and Barrymore have two daughters.

During an appearance on Dax Shepard's podcast "Armchair Expert" in September, Barrymore shared how much she appreciated her ex's new wife.

"I just feel like I won the lottery with her, like, I really did. I feel like I'm lucky that there's this new beautiful soul that came into our lives," she said.

While she's not trying to be Michler's "best friend," Barrymore said Michler "knows that I absolutely worship the ground she walks on, and I'm her biggest cheerleader."

4. Demi Moore and Emma Heming are "sisters" in Moore's eyes 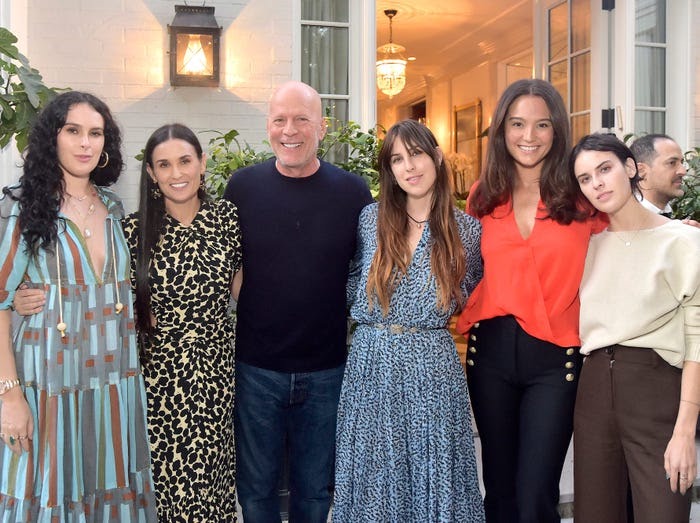 Demi Moore, who was married to Bruce Willis from 1987 to 2000, is a big fan of Willis' wife Heming. In a March 2021 Instagram post dedicated to women who inspire her, Moore fondly wrote about Heming.

"Our children are sisters and yet there is no name for what our family connection is to one another. We are mothers united, sisters bonded on this crazy adventure of life. Emma is a beautiful mother dedicated to her family, an absolutely gorgeous woman and now she can add business entrepreneur to her resume," wrote Moore.

In turn, Heming called Moore one of her favorite people in a June 2021 post. 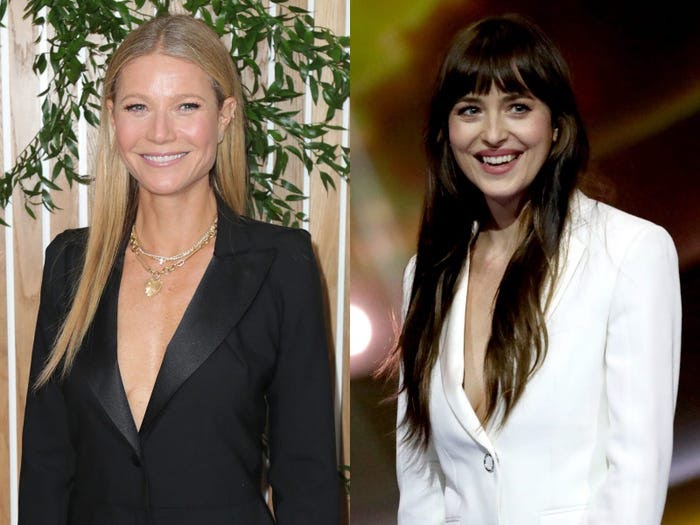 Dakota Johnson, who is currently dating Paltrow's ex-husband and Coldplay frontman Chris Martin, have been spotted hanging out together many times, with and without their respective partners.

For Johnson's 30th birthday in 2019, Paltrow posted a photo of her captioned "Happy 30th birthday to this absolute gem" with a heart.

In a January 2020 Harper's Bazaar interview, Paltrow elaborated. "I love her. I can see how it would seem weird because it's sort of unconventional. But I think, in this case, just having passed through it iteratively, I just adore her," she said.

6. Sarah Silverman and Jimmy Kimmel are some of the friendliest exes in Hollywood, but Silverman is close with his wife, Molly McNearney, too 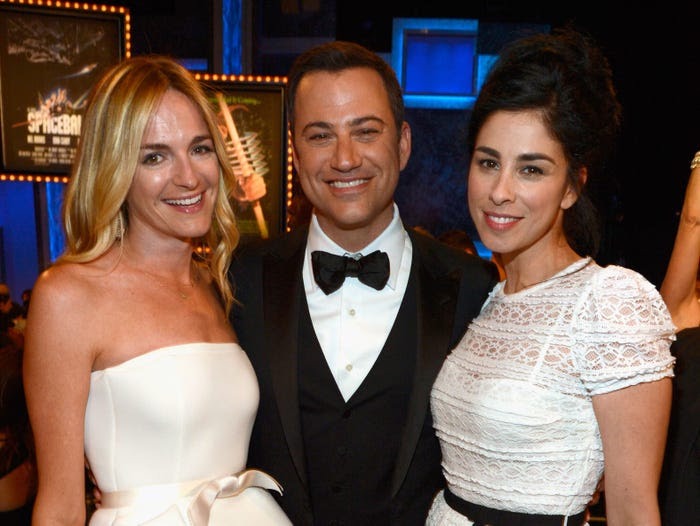 The two comedians dated from 2002 to 2009. Kimmel and McNearney tied the knot in 2013. Silverman frequently appears on Kimmel's show, and she's joked about how she's waiting for Kimmel's "tryst" with his wife to end.

Back in 2014, McNearney shared how she felt about Silverman, telling Glamour, "She is incredibly funny and talented and very good on the show. She's always so kind to me, she's so warm, and I just admire her on so many levels, personally and professionally."

In January 2019, Silverman posted a photo of herself with Kimmel and McNearney smiling in the background captioned: "Good times."

7. Busy Philipps has said that she, her husband, her ex Colin Hanks, and his wife all go on vacation together 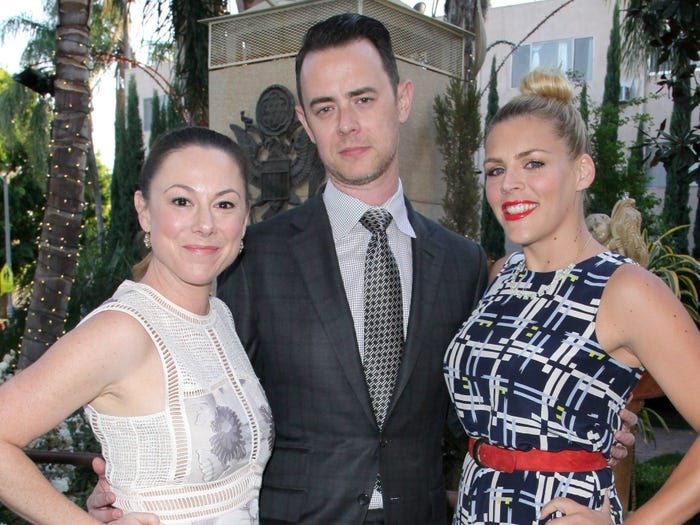 Philipps revealed that the two dated in college when she guest-hosted "Live With Kelly" in December 2020 — Hanks just so happened to be a guest during that episode.

"He was my college boyfriend!" she said. "We are very, very close friends now — his wife and I are tight, he and my husband hang out. We go on vacation together. He's real excited that I'm here," Philipps added.

Philipps has been married to screenwriter Marc Silverstein since 2007, while Hanks and his wife, publicist Samantha Bryant, tied the knot in 2010.

8. Taylor Swift and Sophie Turner have appeared on TV together, and Turner even posted a song Swift wrote about her now-husband Joe Jonas on Instagram 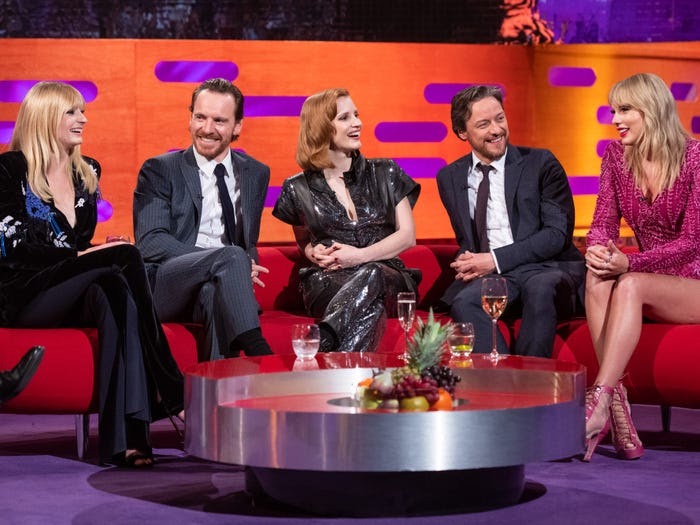 Taylor Swift famously dated Jonas way back in 2008, while Turner and Jonas started dating in 2016 and got married in 2019.

In a line of her song "Invisible String," Swift sings about how she used to have an axe to grind for "the boys who broke [her] heart," but now she sends "their babies presents" — timing-wise, the release of the song lines up with the birth of Turner and Jonas' daughter in July 2020.

Turner and Swift also appeared on "Graham Norton" together in 2019 and were seen hugging. Swift captioned a photo from her performance on the show with a declaration that she couldn't wait to see Turner's movie "Dark Phoenix."

Most recently, Turner praised Swift's song "Mr. Perfectly Fine," which was a previously unreleased track that made it to "Fearless (Taylor's Version)" in 2021 and was speculated to be about Jonas.

"It's not NOT a bop" was Turner's official review on Instagram.

Swift re-posted the story and wrote: "Forever bending the knee for the queen of the North." 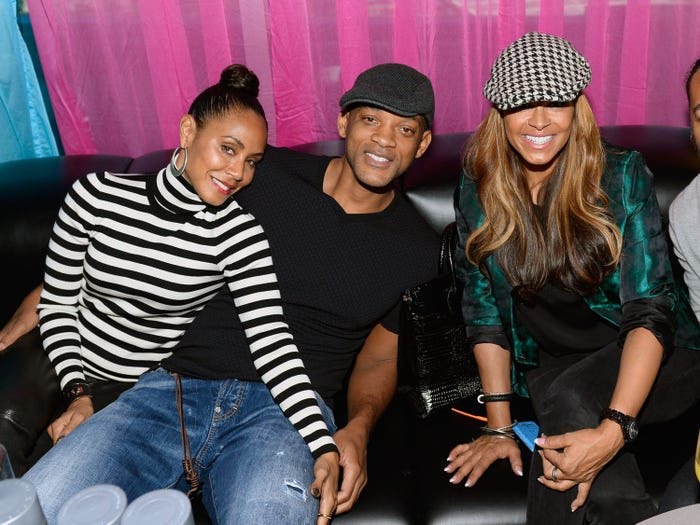 During a prior "Red Table" appearance in 2018, Zampino thanked Pinkett Smith for loving her son.

"So Trey comes home and I said, 'How did you like Miss Jada?' He said, 'I really liked her, Mommy,'" Zampino said.

She added, "Thank you for loving my baby."