Masechaba Khumalo Also Speaks Up About Being Raped by Jub-Jub

South African Media Personality, Masechaba Khumalo who was known to many as Masechaba Ndlovu. 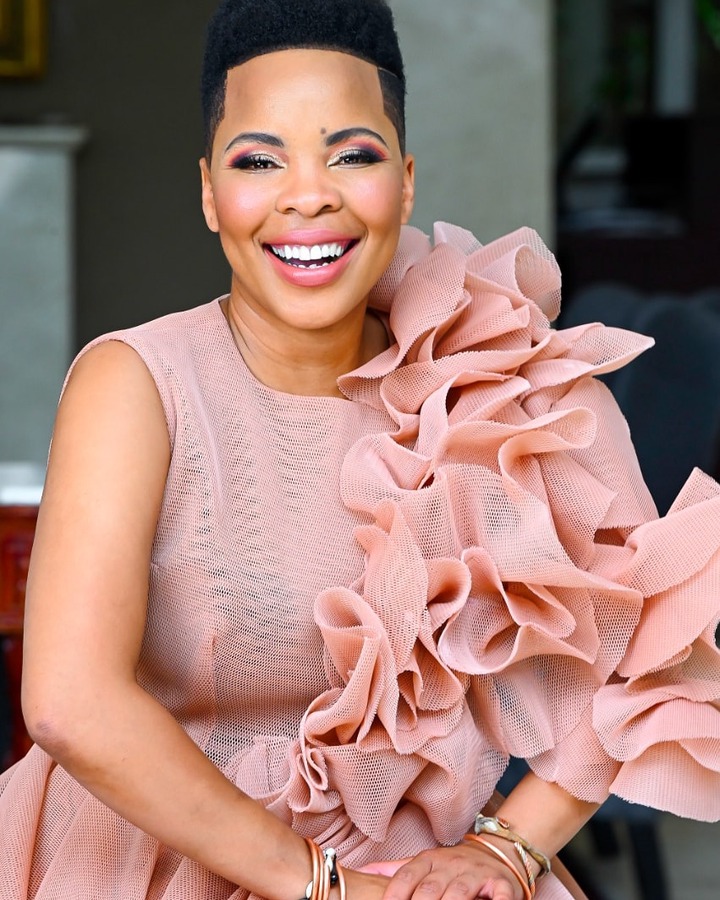 Masechaba is a radio personality, television presenter and recently is a spokesperson for the Minister of Sports and Recreation Mr Nathi Mthethwa. Masechaba has appeared on our television as a presenter for shows like One Day Leader among others. She has been on radio stations such as Metro FM, Power FM and she held it down for a month on SA FM.

Masechaba has been married twice and she has two children from her previous marriage.

Masechaba is known to be a woman that has a voice which commands attention. When she speaks a person is deemed to listen to her and give her full attention.

Masechaba has had her fair share of trends on social media. She trended week in and week out when she made Babes Wodumo speak up about being in an abusive relationship with Mampintsha which was allegedly one of the reasons why she was dismissed on Metro FM.

Moleme Maarohanye known to many as Jub-Jub is a reality show star on Moja Love for hosting shows such as uyajola 99 and you promised to marry me among others. He is also a musician and has hit songs such as Ndikhokhele and Ndikhokele remix. 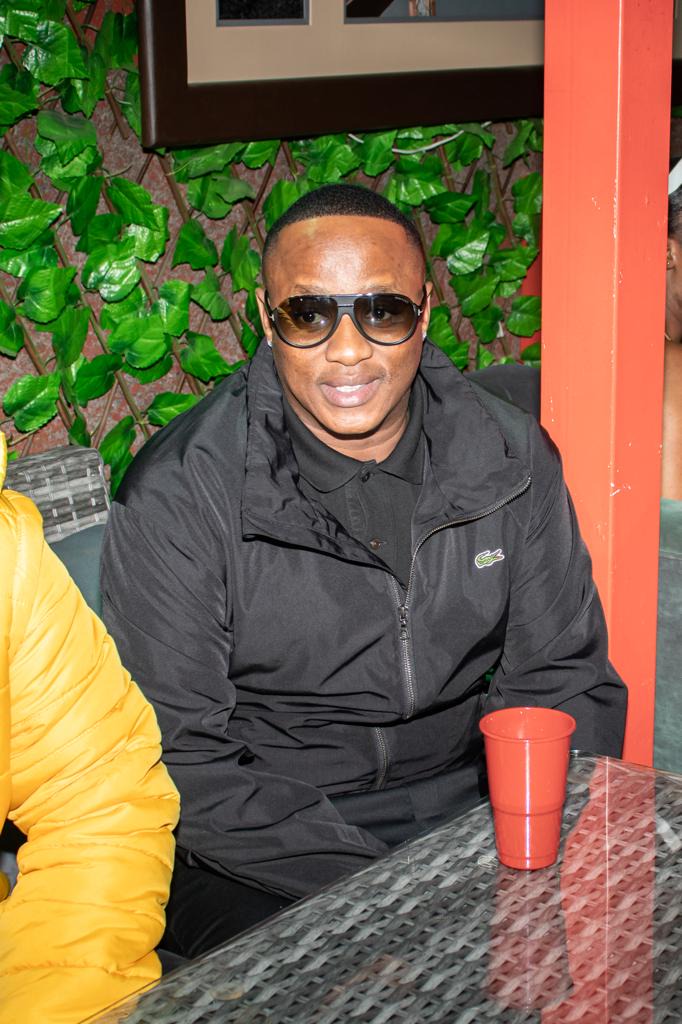 Jub Jub recently had an interview on one of the most watched podcasts currently The Mac'Gees Podcast. He claimed to be there to expose the truth on celebrities. He went there and vented out that he had a relationship with Amanda du Pont and that Kelly Khumalo uses muthi.

It was after a short while after that interview when Amanda du Pont spoke out about the fact that in the relationship that they had together she was raped by Jub Jub. 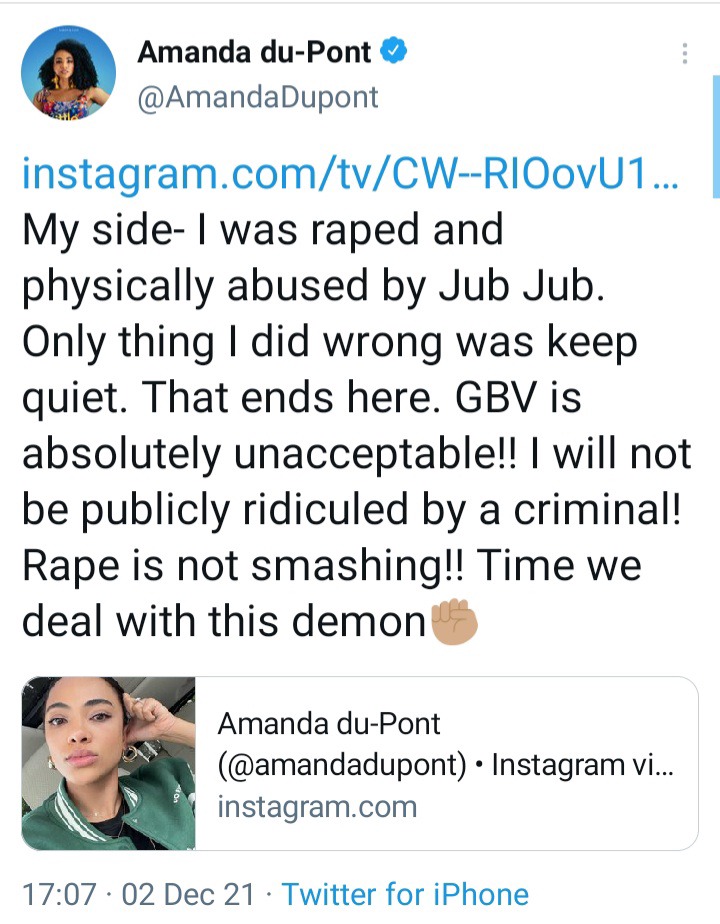 In the early hours of the morning Masechaba Khumalo quoted and replied on Amanda's tweet that he was also raped by Jub Jub in his mother's house in Naturena and she was still very young and a virgin. 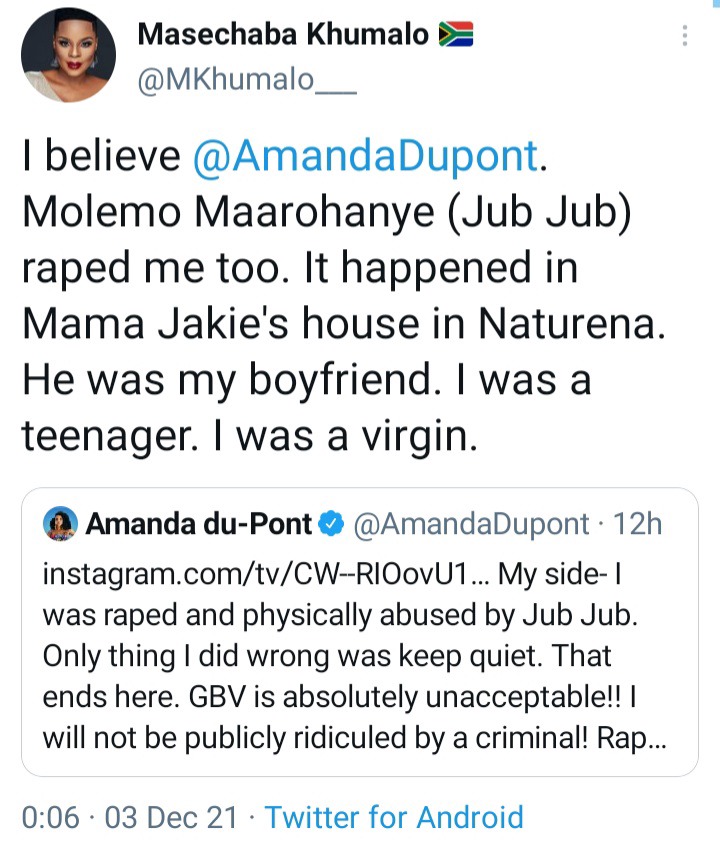 A Lady & her boyfriend have spark arguments online after they posted their lovely photos online.

"Our first apartment" A hustle couple left Mzansi speechless after showing off their achievement.