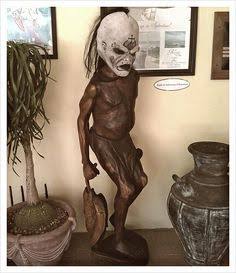 IT WAS supposed to be a one- night stand and nothing more.

But Solomon Masibilanga said the woman he poked had other ideas.

He said she wouldn’t stop calling, demanding more of him.

Now the 56-year-old man from Mamelodi, Tshwane claimed he is being haunted by tokoloshes’ voices in his head.

“I only know her as Salome and we immediately hit it off, spending our first night together,” he said.

“When I met her, I only wanted s.e.x and nothing more. But she kept calling after our first night together,” he said.

After their second night together, Solomon said he made it clear to Salome that he wasn’t interested in a relationship.

“She kept irritating me with her calls until I blocked her. Then earlier this month I met her and made it clear that I’d call her when I needed her.”

But Solomon said after a week he started hearing voices in his head.

“I was shocked to hear her voice in my head saying, ‘I want to kill you, but I won’t because I love you’.”

He said her voice was followed by voices of kids.

“The kids said they were tokoloshes that had been sent to kill me, but instead they played with my 4-5.”

When we called Salome, she said she didn’t know Solomon and hung up.