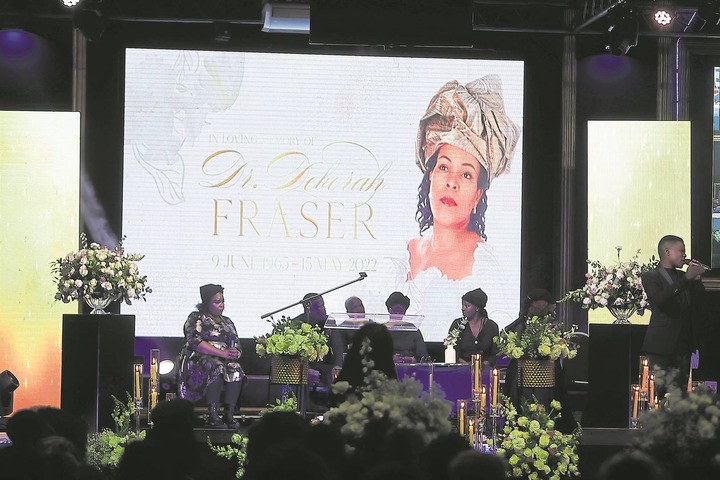 At the memorial ceremony for Deborah Fraser were there not only her family and friends, but also Sipho Makhabane (on the right) and Chicco Thwala (on the bottom right).

At the memorial ceremony held for DEBORAH Fraser on Thursday, May 19th, music was used to honor her life and legacy.

Sipho Makhabane, Puleng March, Vicky Vilakazi, Kholeka, Omega Khunou, and Luyanda Ramatswi were among the other artists that performed during the memorial ceremony held at House of Treasure Ministries in Rispark, Johannesburg.

Following a brief battle with sickness, Deborah passed away on May 15th at the age of 57.

Elouise Kelly, CEO of Universal Music, expressed her sentiments on the company's behalf, saying, "We are happy to have been at her side, as cheerleaders and supporters."

The narrative of how the producer Chicco Twala first became acquainted with Deborah's children, Aaliyah and Nkosana, was relayed by Twala to the youngsters.

When I first met her in the late 1980s, she had a long-standing desire to release a solo album, but it was a while before I was able to make that happen for her. I went to Universal after her cooperation with Brenda Fassie and informed them that I want to give her to them and that she has to start producing money. They said that she must. She deserves more than to be a back-up vocalist, and I don't want to see her in that role.

Twala blasted the government, claiming that Deborah need financial aid but was not given any.

This past Saturday, May 21, the singer will be put to rest at the Lalakahle Cemetery in Hillcrest, KwaZulu-Natal.

Check Out Celebs who cheated on their partners| Photos