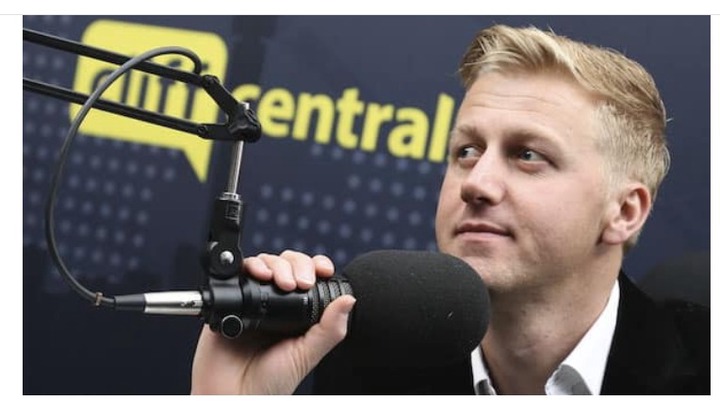 Nando's has unloaded Gareth Cliff's show 'The Burning Platform' after over 5 years of sponsorship.

Gareth has been moving for a couple of days following a meeting he had with DA pioneer John Steenhuisen and One South Africa Movement part Mudzuli Rakhivhane on Cliff Central.

He has been called out for not allowing Mudzuli an opportunity to uninhibitedly communicate her perspectives and furthermore naming her encounters of bigotry as "irrelevant". 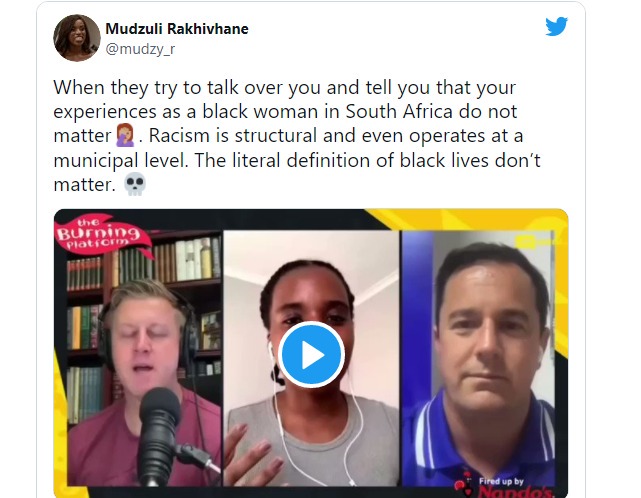 On Friday, Nando's tweeted: "We realize that you realize what occurred in the trade between the specialists on The Burning Platform on 21st October 2021. We are a gladly South African brand that takes the right to the right to speak freely of discourse truly.

"We don't, and won't ever, nullify anybody's encounters or support bigotry in any structure. We are taking this big deal audit."

The tweet was trailed by an assertion yesterday, Saturday 23, the organization reported its choice to end the sponsorship with quick impact.

The assertion read: "There are many cases in which Nando's has not concurred with the assessments of the two visitors and moderators on Cliff Central, yet we have maintained their right to communicate those perspectives as a center part of a sound sacred vote based system.

"On account of The Burning Platform scene broadcasted on [Thursday], Nandos is of the view that Gareth Cliff neglected to establish a climate where free discourse was conceivable by talking over Mudzuli Rakhivhane and excusing her view while not permitting her to sufficiently communicate it."

Nando's said the occurrence was exceptionally baffling and "at chances with the reasons that we initially went into our sponsorship of The Burning Platform over five years prior. We have spread the word about this for Gareth Cliff and Cliff Central group and have asked them to address this with their crowd as an issue of need." 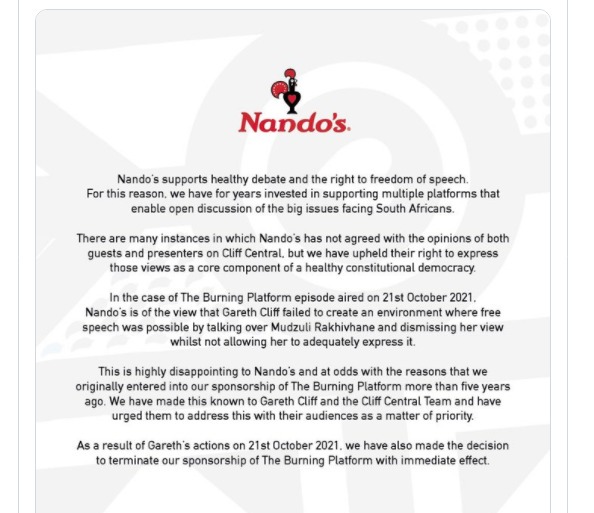 Another well-known show that lost a sponsorship this year is Mac G's Podcast And Chill. Recently Old Mutual gave an assertion declaring that it has removed itself from the webcast following the remarks that were made on the show about transsexuals and their body parts.

The assertion read: "As a mindful business that regards the privileges of everybody, we have chosen to end the relationship with MacG, with quick impact. We distance ourselves from the destructive critique against the LGBTQ+ people group and humankind on the loose,

"Without a doubt, Mac-Gg's editorial was both uninformed and unfeeling, plainly showing that much training needs to occur, particularly in a nation where individuals keep on being segregated, killed, mishandled, and assaulted for being what their identity is."