By PainkillerBibi (self media writer) | 2 months ago 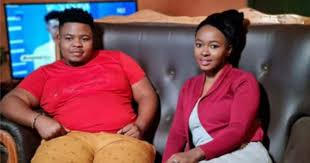 Reality TV star Isencane Lengane's Thando Dlamuka has left viewers of Moja Love speechless and frustrated after she announced that she was pregnant.

Isencane Lengane is a reality show about two teenagers who are married. The show initially raised eyebrows when it first aired but is soon become a fan favourite, with high viewership numbers.

The young bride, who is only 18-years-old, is married to an equally young Siyacela Dlamuka. After getting married, Siyacela dropped out of high school, so he could spend most of his days sleeping and pondering polygamy. However, his matriculant wife Thando was still chasing her dream to become a social worker.

Fans of the reality show decided - after various dubious actions such as lying and cheating - that Siyacela is a bad husband.

The consensus among fans on the TL for the last few weeks has been for Thando to leave him. This is why they most fans were highly frustrated with the possibility of Thando falling pregnant with Siyacela's child.

However, their worst nightmare became a reality when Thando ran a pregnancy test and discovered that she is three weeks pregnant.

Fans were furious at the news, not only because they doubt Siyacela will be a good father but because just a few weeks ago, Siyacela told Thando that he had impregnated the girl he had been cheating on her with.