Cassper Nyovest had the last laugh when he came across a clip of the super smooth rapper Costa Titch performing an Amapiano song in Cape Town over the weekend. This after Costa told Cassper to stay with Amapiano when he saw him give up the game and told him not to come back to make hip hop music when he broke it up. 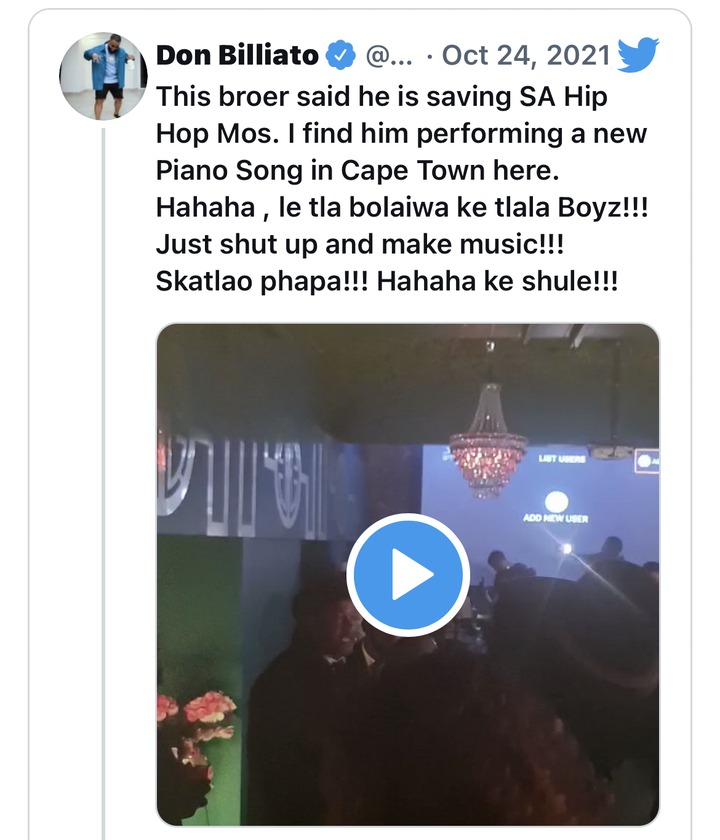 It all started when Costa joined other rappers who shared his views on hip hop artists who quit the game to join Amapiano. Costa wrote on his social media: “SA Hip Hop is meeting. If you jumped off the boat, stay there and let us respectfully fix whatever you broke. " Cassper caught his sub and responded on Twitter saying that she wanted Costa to say that to his face. 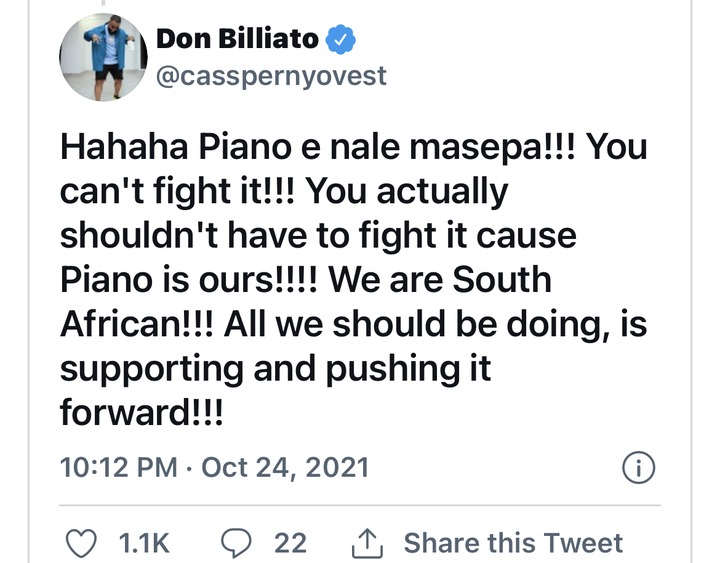 “Apparently Hip Hop doesn't need Cassper Nyovest !!! They come together and things look brilliant! Costa says he's fixing what I destroyed. Azange kea tsega yana mo lifeng (I've never laughed so much in my life.) I'm back in SA and can't wait to meet him, so he has to explain it personally ... ” 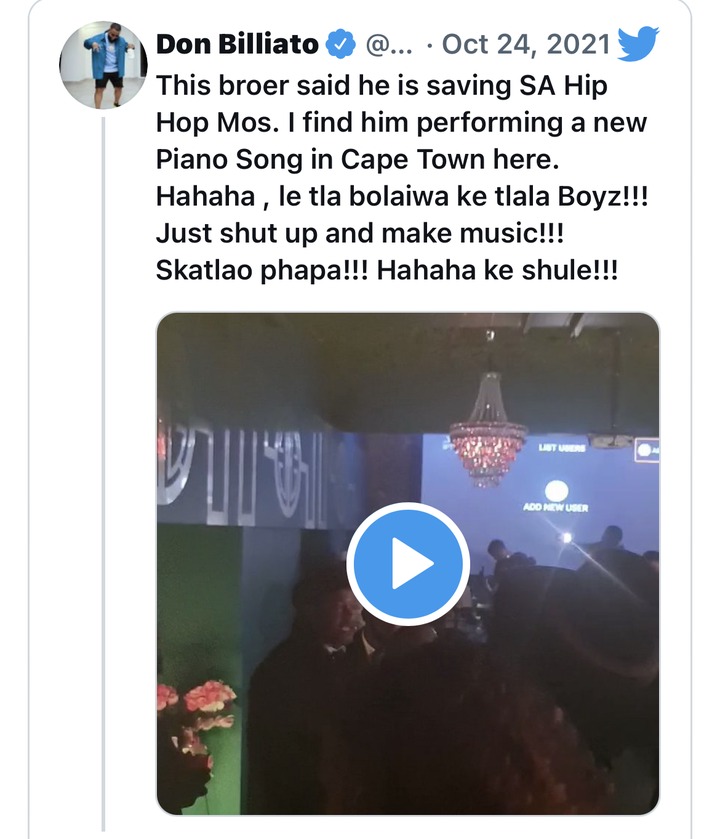 Cassper couldn't believe it. when she saw Costa perform an amapiano track, she put on her hat and pulled Costa. She told him to shut up and put on whatever music he wanted to avoid hunger. She also advised him to push the genre forward, as it prides itself on being SA music. 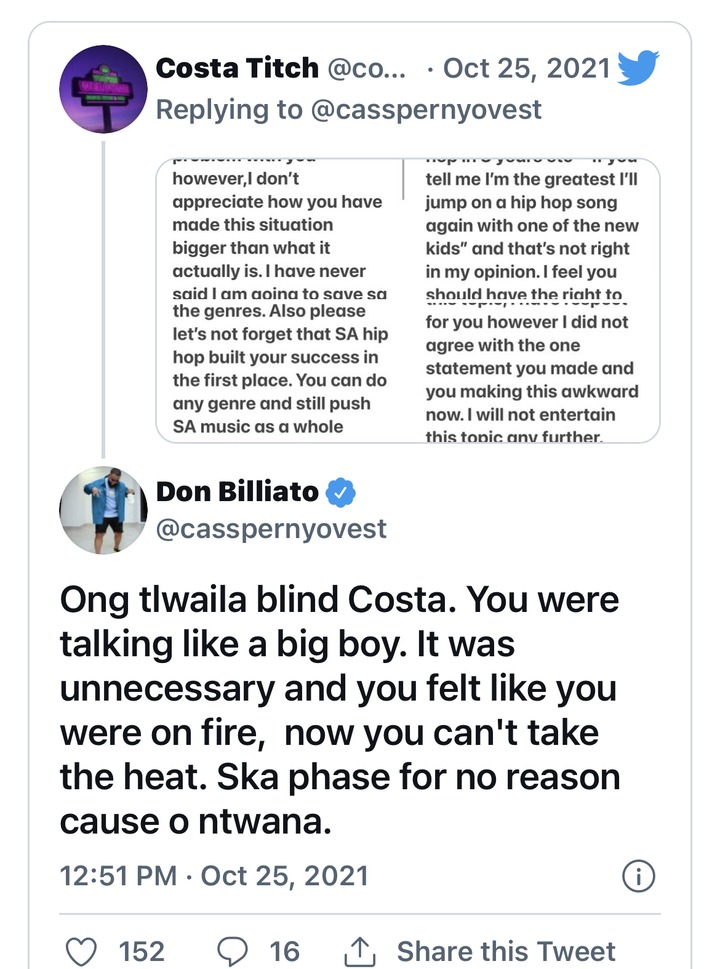 Costa is fed up with the shady taunts Cassper keeps throwing at him, so he responded to Cassper by explaining what he meant by the "Save Hip Hop" comment. 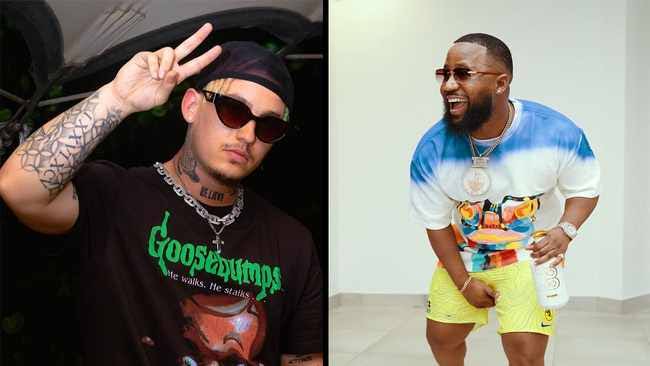 “Nyovi, I let you go with your story long enough without saying anything, I have no problem with you, but I don't understand how you made this situation bigger than it really is. I never said I would save SA Hip Hop. All I said is that SA combines hip hop. If you jumped off the boat, stay there and let's fix what you broke, ”she said.

He said that he was referring to his earlier tweets about being on both sides and choosing neither side: "What I mean by that is that you keep pushing this narrative of being on both sides." I'm going to hip hop in 3 years and "" If you tell me I'm the best, I'll jump back in with one of the new guys on a hip-hop song. "And that's not correct in my opinion.

“I think you should have the right to do what you want and shape both genders with a positive attitude, without demeaning either one. Also don't forget that SA Hip Hop was the main reason for its success. You can do any genre and still advance SA's music as a whole because you have a huge impact.

He then adds that due to his own success, Cassper influences and inspires many young artists in both genres. He then says that he has a lot of respect for Cassper and that he should put that in bed once and for all.