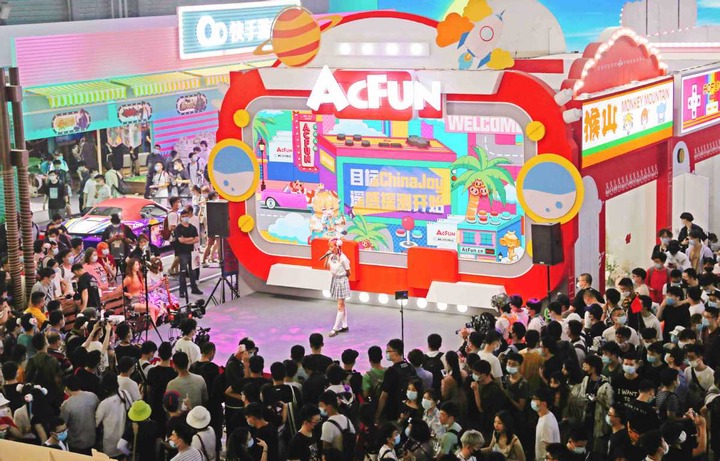 A woman dressed in a uniform performs on stage during the China Joy exhibition in Shanghai. Chinese cultural elements are now fodder for locally made comics, which will target overseas audiences with content across genres and styles like historical adventure, romance, humor and slice of life. CHEN YUYU/FOR CHINA DAILY

Flush with cash, Kuaikan is girding itself for global forays of its original creative content

Kuaikan was founded in 2014 with Chinese internet heavyweight Tencent Holdings Ltd as one of its backers. It raised $240 million in a new funding round in August, having started exploring overseas markets in 2018.

Kuaikan delivers a vast library of comics developed by professional creators and a community of fans. The company said in August that it has 100 contract authors, and 8,000 content partners.

Experts said Chinese comics, or manhua, feature a wide range of genres and styles ranging from historical adventure to romance, humor and slice of life. It is not easy to promote Chinese comics in foreign countries.

Yet, Chen Anni, CEO and founder of Kuaikan, said the company is cooperating with more than 70 comic platforms covering nearly 200 countries and regions in 12 languages, including Japanese, Korean, English, French, German, Spanish, Portuguese and Russian.

The August funding will be used toward the planned 1 billion yuan ($154.7 million) investment over the next three years to boost the development of original comics. Another 1 billion yuan will go toward partnerships for the production of videos and plays based on comics.

It said 85 percent of its users are young people under 25, and consumers born between 1996 and 2010－Generation Z－are its target. Quest-Mobile, a research firm, predicted the demographic will make up two-thirds of all online entertainment consumption in China by 2023.