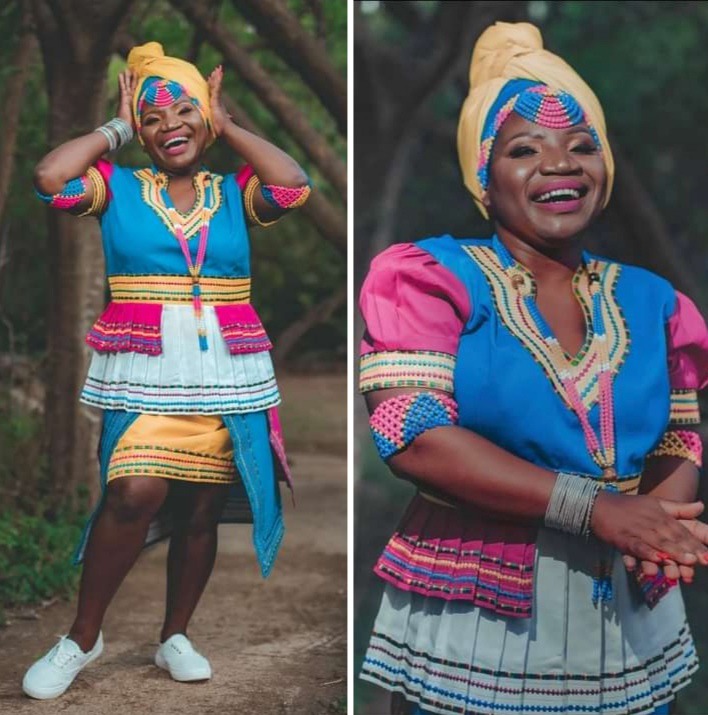 The successful singer and song writer Ndivhu Aka Makhadzi looks fabulous in her venda tradition clothing. The traditional attire makes her look more feminine, the Venda queen who became more popular after releasing her  major song Matorokisi. Ndivhu was born in the small village called Ha-Mashamba Tshivhangani, in the village  just outside Elim in limpopo province.

She comes from a humble beginnings, with unemployed parents. She is an elder sibling to her two youngsters. After the divorce of her parents she had to help her

grandmother, who played a very big role in her upbringing. Makhadzi managed to be a good role model and a provider to her siblings.

She finished her grade 12 at Mukula Integrated school. Makhadzi graduated with a degree in Public Relations and she proceeded with her studies by studying drama. Amazing isn't it? Many people perceive singing as a career of the uneducated, but with ndivu singing and dancing is just something she loves, it is a passion she has for it. Makhadzi started to take her dancing and singing skills serious at the age of 12 when she joins the Makirikiri musical group.

It is interesting how her singing career started, as she would play around songs, recording and singing while in the studio. Then one of the good days the studio manager recognised her talent and presented her with an opportunity to explore her gift in his studio. Thats where it all started and in a very short period of time her hints were listened allover the nation.

Makhadzi composed and produced all the songs on her albums, she released a major hit song titled Zwigevhenga on the 9th of March, 2012. Makhadzi has released six studio albums to date.

Makhadzi released her first album named Muvhango in (2012). She had to hit two birds with one stone, while she was busy with her music career, she also had to study. As she had to make either way between the two to workout. Her siblings were looking up to her as their solely provider. Fortunate enough her music paths took her where she never thought she would reach anytime soon.

Content created and supplied by: Hedia (via Opera News )

Celebrities who are proud of their dark skin color

Simz gushes over her boys.