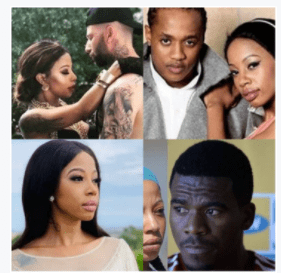 This 36-year-old woman, on the other hand, is suspected of murdering her prior partner, Senzo Meyiwa. Kelly has been accused of numerous crimes, leading some to believe she is possessed or has a dark shadow hanging over her. They even accuse her of being responsible for some of her ex-lovers' misfortunes.

Here are some of Kelly Khumalo's previous boyfriends and the reasons for their breakup:

Kelly and Prosper worked together before they started dating in 2007, and Prosper was Kelly's music manager and business partner. Kelly's virginity was apparently broken by this late businessman.

Kelly reportedly miscarried her baby after learning that her boyfriend had cheated on her with a waitress. Prosper died in 2013 after a brief illness. By the time he died, he and Kelly had already broken up.

Kelly Khumalo and Jub jub had the longest relationship; she even became pregnant with Jub jub's baby boy in 2009 and gave birth in 2010.

Kelly Khumalo was extremely supportive of Jub jub during their dating period, even accompanying him to court for his case of inadvertently killing four school children. They split up because Jub jub was allegedly abusing Kelly, which he disputed, saying Kelly was only looking for attention. Jub jub was later found guilty.

Kelly and Senzo began dating in 2013, after his wife and he had been married for a few months. Kelly, it appears, had no notion that her boyfriend was a married man. Senzo's wife also learned of her husband's romance with Kelly, which sparked a public brawl pitting Kelly and her younger sister Zandi against Senzo's wife.

Kelly became pregnant with Senzo's daughter a year later, and she gave birth in March 2014. After an argument inside Kelly Khumalo's home in Vosloorus on the 26th of October 2014, Meyiwa was shot and died.

After three months had passed since Senzo's death, Kelly and Nzama began dating. Nonetheless, because Kelly Khumalo was his sidekick, their romance did not last (Nzama was a married man). Kelly allegedly urged Nzama in February 2015 that he should divorce his wife for her, but he refused. Kelly became enraged and began abusing him after he refused to do as he was instructed.

This man did not file any charges against her; he simply decided to end their relationship. Kelly was reportedly still in love with Senzo at the time, and the sangoma was really a stopgap measure.

It was love at first sight for Chad and Kelly. It happened during the filming of a music video in October 2018, and they got engaged after only two months of dating. These two even had ring images tattooed on their fingertips to signify their love as real engagement rings. Last year, they called it quits (2019)