It is so heartbreaking how the famous Queen of Limpopo Makhadzi is very much hated at the moment because of what she did to the young upcoming artist called Tuksin SA. The young boy is the same one that released the dancing song version of Tshivhedzelelwa where in the song, is about the Zion church people because its how it was formed by them and then the young artist decided to put some groove on the song. Then it became a dancing song and people loved it very much that you would find each and every club singing to it when people are under the influence of alcohol.

It was brought to the fans attention by Tuksin SA as he was sharing how heartbroken he was that Makhadzu wants to leave him to dry. After the release of the Tshivhedzelelwa song the young artist thought it would be a great idea if himself and Makhadzi, could have another version of the song where in makhadzi will be featured in it. Everything went as planned until the day of recording when fans heard the new version with the makhadzi featured some were jelous and they spoke ill of Makhadzi. Their words were hurtful on the comments as they said that she "doesn't like things to pass her by she could have just allowed the young artist to Shine alone not for her to steal his shine and his song" Quoted.

Those words did not affect her that much until the day of the music video release. When mostly on the screen makhadzi, was been shown then it was then that other fans who are not so fond of her started with the criticism. They mentioned that she is selfish and doesn't she get enough 9f singing since she has a lot of songs of her own she should leave song to the young artist. That is when makhadzi decided to drop the young artist and said that she can nolonger continue with the release of the song because people are saying hurtful words to her.

Tuksin SA is the one who shared the chats 0f himself and Makhadzi as he was explaining to the public how their comments ruined his life. Here is the screenshot of the conversation between Makhadzi and the young artist as she was explaining that people are not happy with her being on the song. This is a photo of their conversation from Facebook social media platform as posted.

Here is a screenshot as he was explaining on Facebook on how hurt he is by the things occurring and that his dream of being shattered was thrown to the mud by peoples comments. PICTURES OF THE SHARED STORY ON FACEBOOK

Now some fans believe that Makhadzi is self centered and that she doesn't like to see young adults to grow in the music industry because she just left the young musician by a text message.

Here is a screenshot of the video as he was recording telling people how hurt he is. THE PICTURE OF THE VIDEO THE ARTIST TOOK IN AND POSTED ON SOCIAL MEDIA. 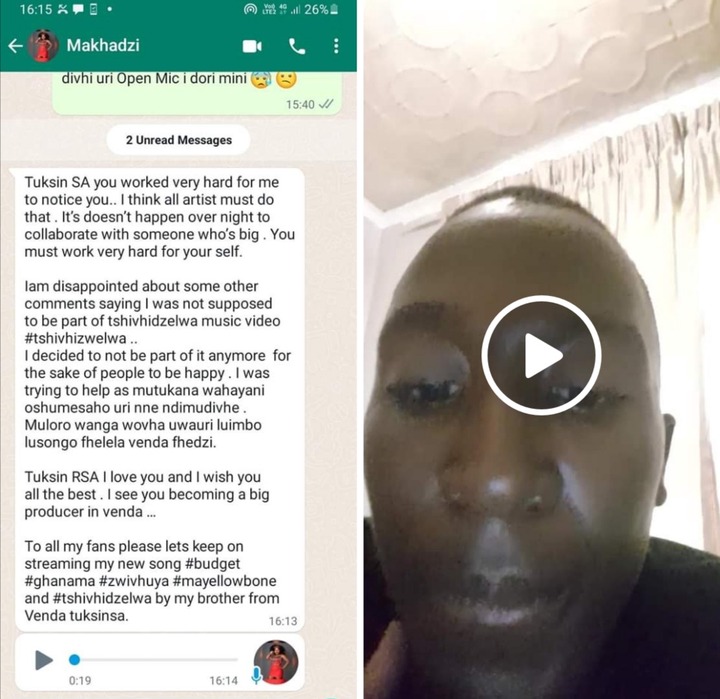 Do you feel what makhadzi did was profound and great? Leaving the young artist like that?

After the shared chats and videos on Facebook people decided to share. Their opinions and comments on the matter here is what they think of Makhadzi now. Pictures 9f the comments from social media of people views on the issue.

Cassper Nyovest has been dragged on Patrick Shai death, check what people are saying about this