26 celebrity parents who have twins

By phutigerald (self media writer) | 1 year ago 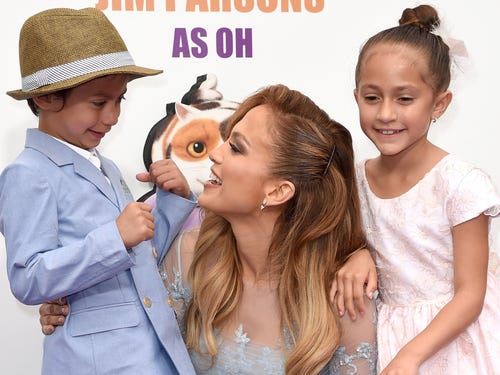 Lopez with Max and Emme in 2015. Getty/Kevin Winter

Beyoncé made waves in February 2017 by revealing that she and husband Jay-Z were expecting twins: Her photo announcement quickly became the most liked post on Instagram in 2017. But Queen Bey's twins aren't the only multiples with famous parents.

For instance, Enrique Iglesias and his longtime girlfriend Anna Kournikova also welcomed twins in December 2017, and excited fans when they debuted their babies on Instagram this month.

Here are 23 more stars who have twins — and one bonus celeb who has triplets:

Mariah Carey gave birth to Monroe and Moroccan in 2011. Today, they're 5 years old. 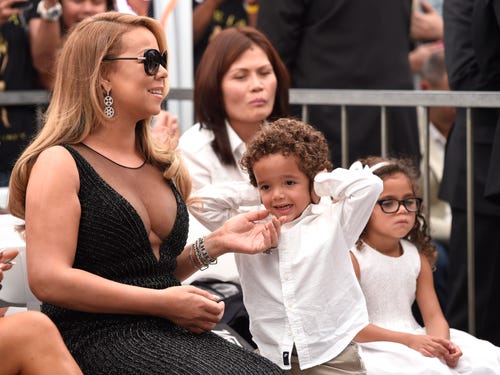 Carey with her children Moroccan and Monroe in 2015. Chris Pizzello/Invision/AP

Things didn't work out with the twins' father, Nick Cannon: Cannon filed for divorce in December 2014.

Angelina Jolie and Brad Pitt announced the birth of twins Vivienne and Knox in May 2008. 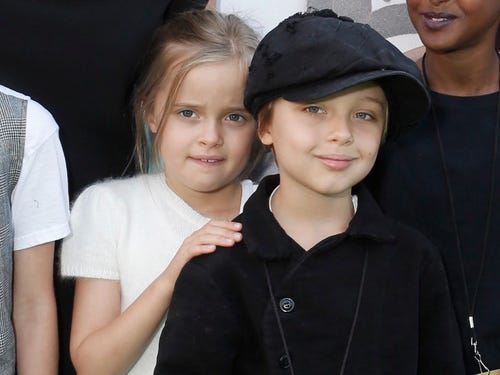 The 8-year-old twins are just two of the six kids at the center of Brangelina's highly publicized divorce proceedings.

Lopez with Max and Emme in 2015. Getty/Kevin Winter

JLo told Entertainment Tonight that her kids make her feel young (it's seriously hard to believe that the singer is 47 years old).

"They keep you very young and running around, and I still get to dance and perform," she said of the 8-year-old twins. "That keeps you very in shape and youthful as well." 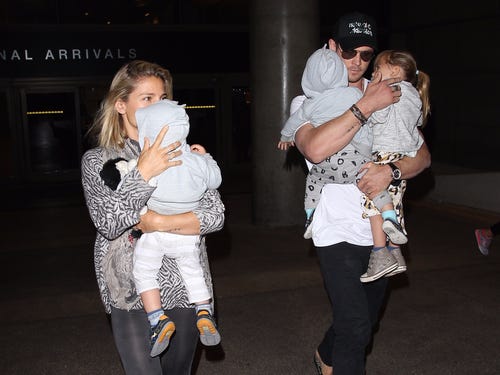 Hemsworth and Pataky are very protective and never show their kids' faces on their social media profiles. But they have shared some really adorable shots of the backs of their heads — check them out on Pataky's Instagram.

Julia Roberts is the mom of 12-year-old twins Hazel and Phinnaeus — though they're not often photographed together. 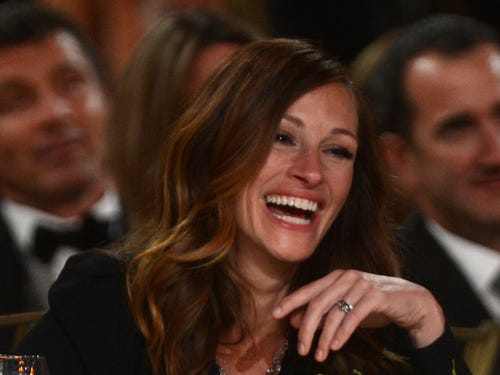 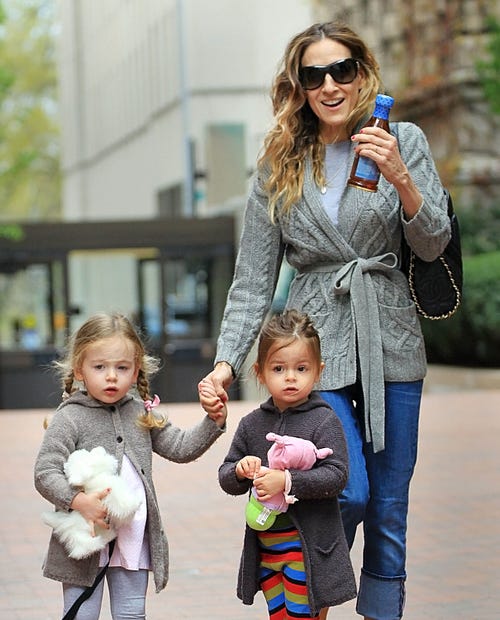 Check out a more recent photo of the twins on Parker's Instagram. 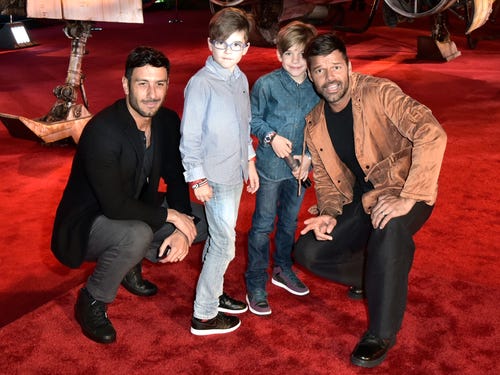 Martin with his partner Jwan Yosef and their twins in 2016. Getty/Marc Flores, Stringer 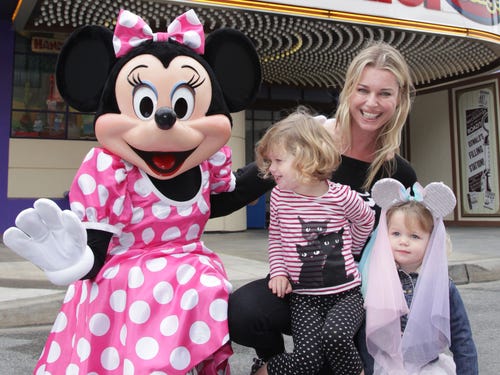 Romijn with daughters Charlie, left, and Dolly, right, in 2011. Getty/Handout

"It's hard with twins because it prevents you from being too much of a helicopter mom," Romijn recently told People. “You've got two at the same time to take care of, and the one who needs you the most is the one who gets you. And so the other one's gotta cry it out until you can get to her." 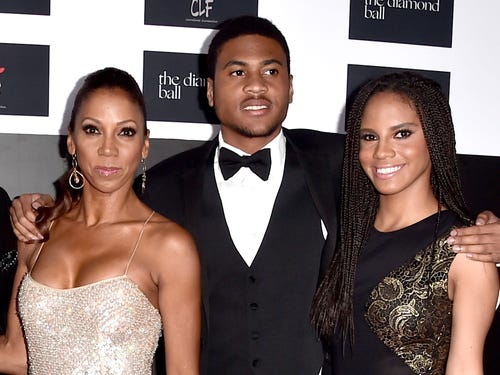 In recent years, the Peetes have opened up about their Rodney Jr.'s autism, telling Oprah that he has "taught everybody love and respect, and that's what every one of our kids has." 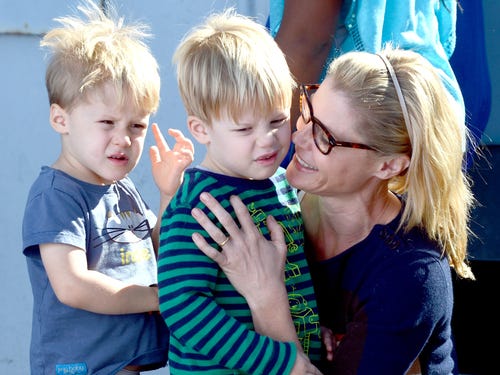 Bowen with sons John and Gustav in 2012. Getty/Michael Buckner

She told the Huffington Post that her best advice for parenting twins was to "make friends with exhaustion." 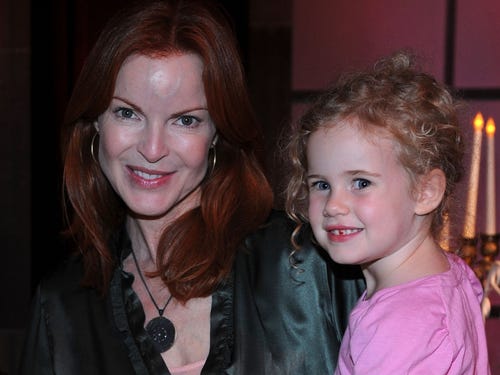 Cross with one of her twin daughters, Eden, in 2010. Getty/Frazer Harrison

She once told People that being a mother was "so much better than I even imagined."

Celine Dion had three children with her late husband René Angélil: 16-year-old René-Charles and twin brothers Eddy and Nelson, both 6. 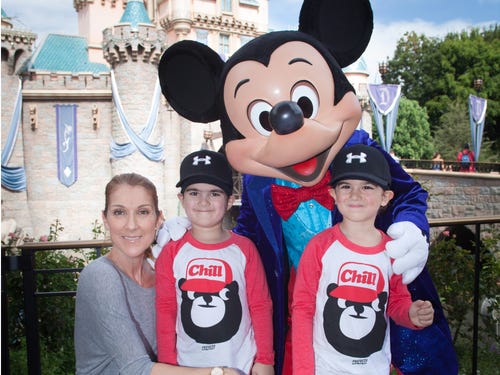 Dion with twin sons Eddy and Nelson in 2016. Getty/Handout

The twins celebrated both their fifth and sixth birthdays at Disneyland in California. 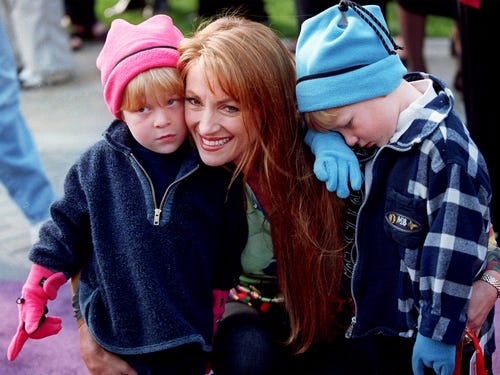 Seymour with twin sons John and Kristopher in 2000. AP/Chris Pizzello

Neil Patrick Harris and David Burtka's twins Harper and Gideon, 6, were carried by a surrogate. 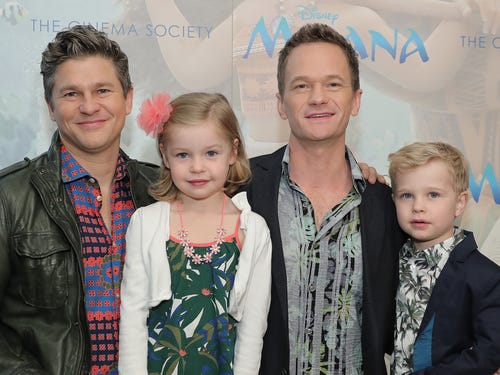 Burtka, Harris, and their twins, Harper and Gideon, in 2016. Getty/Neilson Barnard

Harris announced the birth on Twitter, writing, "All of us are happy, healthy, tired, and a little pukey."

Michael J. Fox and wife Tracy Pollan welcomed their twin daughters Aquinnah and Schuyler back in 1995. The girls are 21 years old now. 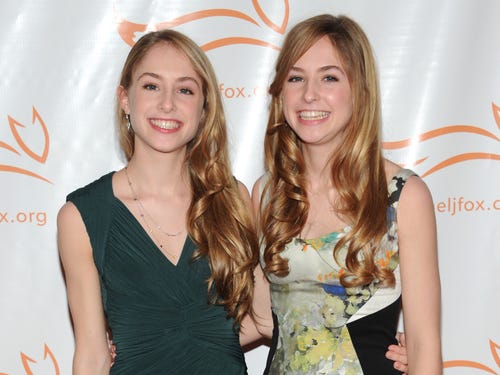 Geena Davis is rarely photographed with her children, but she and husband Reza Jarrahy do have 12-year-old twins named Kian and Kaiis. 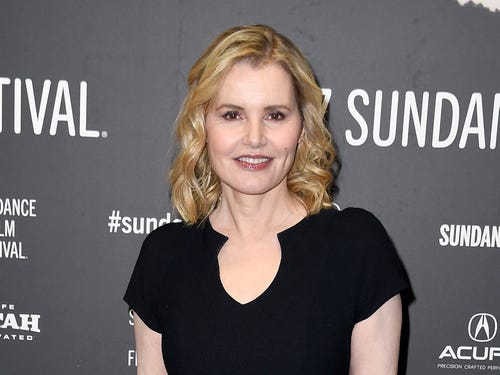 She was 48 years old when she gave birth.

Actors Angela Basset and Courtney B. Vance are parents to 10-year-old twins Bronwyn and Slater. 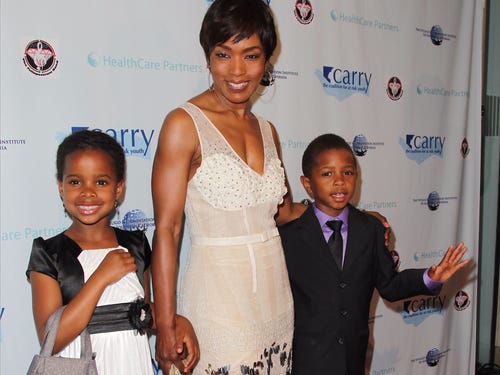 Bassett with twins Bronwyn and Slater in 2013. Getty/David Buchan, Stringer

On June 6, 2017 George and Amal Clooney welcomed twins Ella and Alexander into the world. 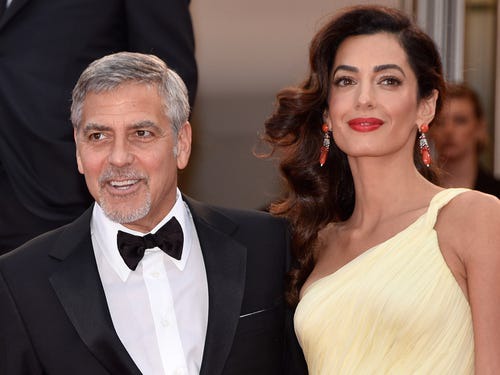 A rep for the stars told People that Amal and the babies are happy and healthy.

That same month, soccer star Cristiano Ronaldo confirmed that he had become the father of newborn twins. 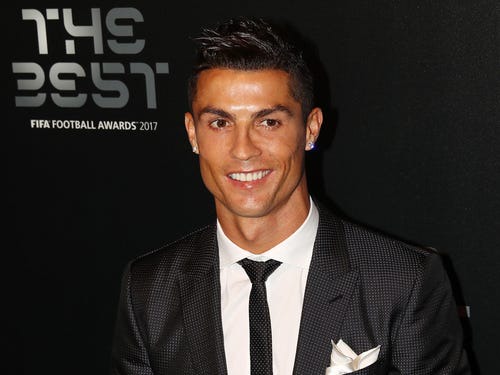 Reports released at the time didn't reveal the identity of the twins' mother.

In June, Beyoncé gave birth to her own set of twins: a boy and girl named Sir and Rumi. 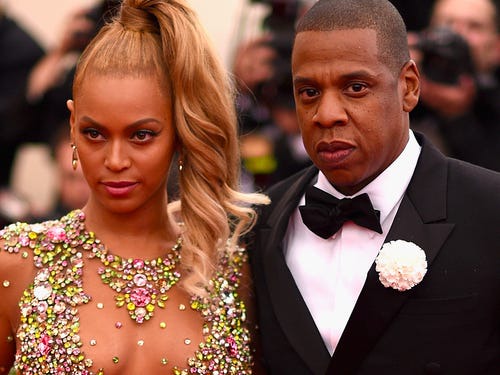 On July 14, Queen Bey shared the first-ever photo of the twins on Instagram.

With the arrival of the twins, Queen Bey and her husband Jay Z are now parents to three. Their 5-year-0ld daughter Blue Ivy was born back in 2012. 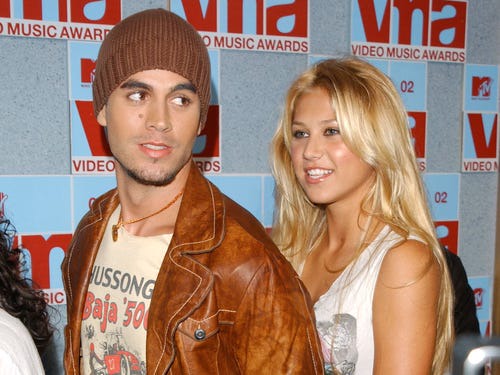 They recently debuted their twins on Instagram in January. 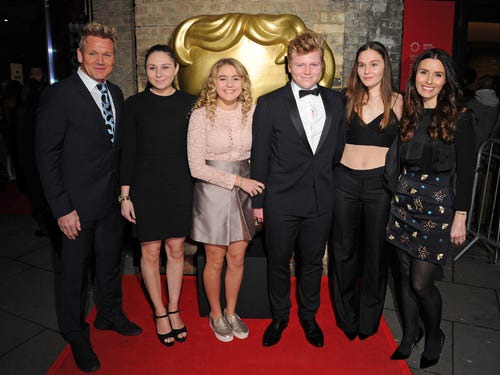 Ramsay with all four of his children (from left to right), Megan, Matilda, Jack, Holly, and his wife Tana. Eamonn M. McCormack/Getty Images

Madonna confirmed in February 2017 that she adopted twin 4-year-old girls from Malawi named Estere and Stella. 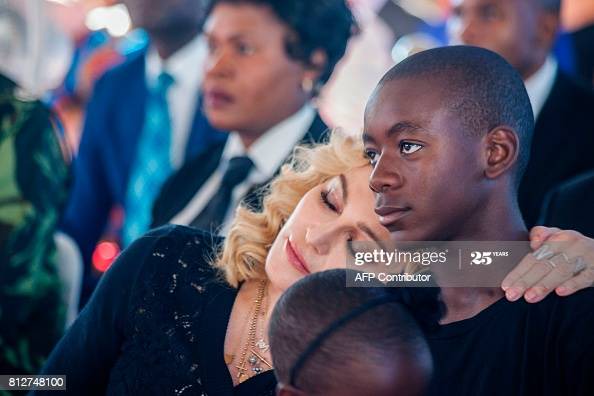 Madonna with Stella, David, and Mercy in July 2017. Thoko Chikondi/AP

Madonna had previously adopted two other children from Malawi, son David and daughter Mercy (both 11).

Zoe Saldana and her husband Marco Perego welcomed twins Cy and Bowie in 2014. 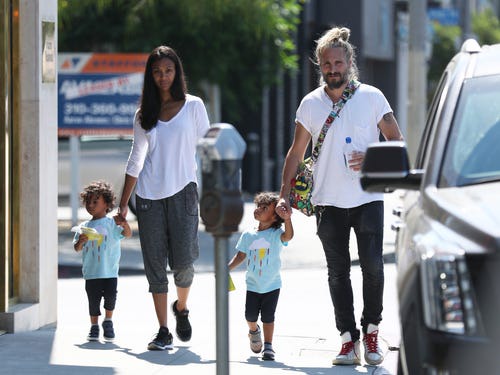 Saldana and Perego with their sons in 2017. Splash News

The twins celebrated their third birthday in November, which Saldana commemorated with an Instagram post where she said she would "make sure you grow up to be exceptional men."

Anna Paquin and Stephen Moyer met on the set of "True Blood," and now have 5-year-old twins Poppy and Charlie. 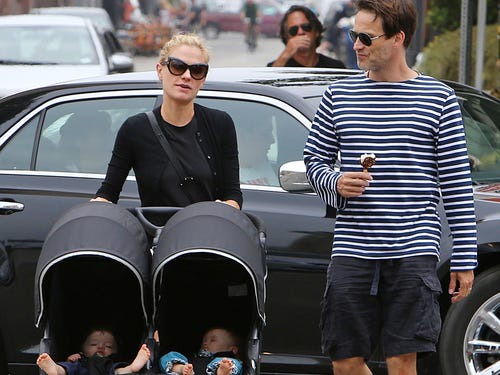 Paquin and Moyer are extremely private about their children — they didn't reveal their names until nine months after they were born. 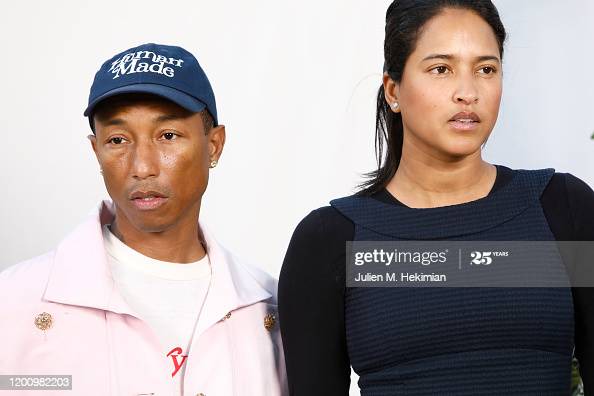 The names of the triplets have yet to be released. Williams and Lasichanh already have a son, Rocket, who was born in 2008.