By Marara (self media writer) | 1 year ago

Masoja Msiza is popularly known for his role as Nkunzi on Uzalo. He is a natural-born poet and entertainer. He is also a man that we have all come to love and hate with varying intensities, on screen. The talented star has also starred in a lot of plays on TV and has recently released an album dubbed time to rhyme.

Of all the Uzalo characters, Masoja Masiza is one who arouses public interest with his character. He does not spare any chance to be in his best character while on screen. This attribute makes him a darling of many. That is how good he is. Who is Nkunzi's wife from Uzalo? What is Nkunzi's real name? You probably know the answers to these two questions. But do you know the answer to, who is Nkunzi in real life? Learn all you can about Masoja Msiza.

Masoja was a mine worker before starting his acting career. He was dismissed from his mining job for being part of a protest, and that is how he decided to go back to acting.

Masoja began his acting career when he was nine years old. He used to act at school and church as well, and at 14years, he won a drama competition. After finishing school, Masoja went to work in mining. Due to his participation in a protest, he was dismissed. He says this was a blessing to him because it was then that he started following his dreams of acting. His debut gig was featured in a play called Mfowethu that was written and directed by Gibson Kente.

Nkunzi can be described as a man who behaves in a crazy manner. All in all, he has an undying love for his family beside him being staged as a criminal. He does everything out of love for both his wife, Mangcobo Uzalo and daughter regardless of the consequences. That is where he has managed to win most of our hearts! Nkunzi is, however, obsessed with money and power and does not care about how it affects people around him.

Let not his acts on TV fog your judgement. Nkunzi in real-life describes himself as a plum. A fruit that is attractive to look at and upon biting, it is equally sweet.

Masoja was married to Innocentia. The duo is believed to have divorced considering Masoja’s claims. He said.

I really miss my kids‚ I miss all of those close to me. I see them when I come up to Johannesburg‚ like in the December holidays. I am used to that because my siblings and I were raised by relatives. I would see them at Christmas time. I wanted the cycle to end with me. I have suffered, and I thought it would end with me, but I did not think it would happen to my children‚ that I would go through a series of divorces. It was beyond my control.

Masoja is a father of two daughters and a son whom he loves very much.

The star has been raised in Ndebele. He grew up in Kwa Thema township, springs east of Joburg. Growing up, he was exposed to different languages, and he taught himself isiZulu. 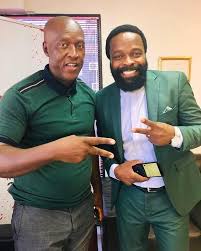 The celebrity owns expensive rides as per his Instagram account. This just portrays the part of his flashy life that he lives.

Masoja Msiza appears to be a private person. Nothing much about his personal life has been posted on his Instagram account. He, however, posts about his work creating awareness on it.

Even though Masoja Msiza's net worth is not readily available, his estimated salary has been made available. According to a YouTube video showing the salaries of Uzalo actors.

How men should treat women

Masoja Msiza grew up thinking woman abuse is acceptable. Something he is not proud of right now. The Kwa-Thema born star changed the perception as he grew up, and he wants to teach his fellow men on how to be gentlemen and treat women right.

Msiza targets social change through his music and poetry. He is set to release a 12 track album addressing social problems. He condemns inequality, blessers, and gender-based violence. Growing up, Masoja Msiza had three siblings, both with different fathers. None of them had a father figure to look upon, and when his mother fell sick, the relatives shared custody of the children. Masoja only came to meet his father when he was 14 years of age. The star claims that growing up in Kwa Thema paralyzed his mind. He tells a source that he thought macho men had to use their strength on women just to make a point of the position they hold in society. He said,

I used to be a heavy drinker, and I could not differentiate between right or wrong. Addressing women in a bad manner was normal. I only realized my mistakes as I matured, and I now know that a man must protect and not bully women.

The activist says that being a father also helped him change his perception. He says that he would not want his children to go through whatever he had to go through as a child. The 54-year-old visits schools, homes, and prisons to share his stories and give people hope. He is also frightened by today's trend where young girls date older men, “blessers” for material gains, and he hopes to change this through his upcoming album.

I am a father of two girls, and I am also a father-figure to many other young girls. I am scared my daughters might see dating older men as a shortcut to earning money.

Masoja has successfully published two poetry books, Avalon and The Voice of Hope, besides being in the church choir. He says that his album is a mixture of dramatic poetry and all music genres. Working with gospel artists Fikile Mlomo and Swigili, the poet did most of the work by himself. He says,

We are currently in a state of confusion. We are living in a world where we are blaming each other, and that is because men have neglected their role in society.

With his talent, the actor wishes to create a world where children are free.

Masoja Msiza is someone to be looked upon. He is a father figure to many and a mentor as well. The talented actor's decision to use his skill to condemn social ills happening right now is not only impressive but also something to be encouraged. Content created and supplied by: Marara (via Opera News )