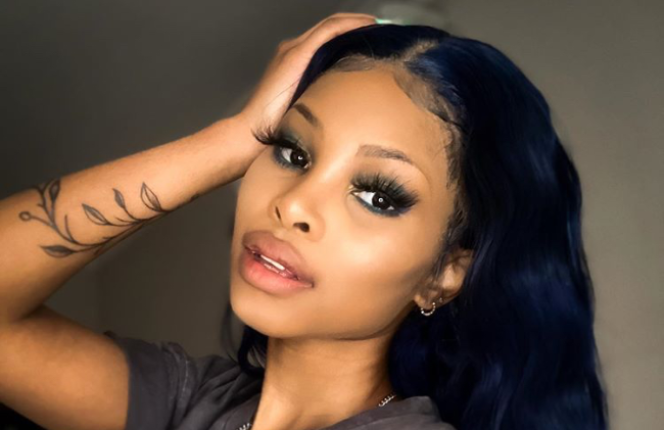 Nandi Mbatha is a 24 year-old South African model and actress who came into the limelight after starring in the television series Isithembiso. The life of the multi-talented Stargirl is a peculiar one. The milestones she has achieved in the South African entertainment industry at a young age, particularly her role as Simi in the Isithembiso television series, have given her a platform. No wonder many are so interested in knowing more about her journey and background.

Nandi Mbatha was born on November 27, 1997, in Newcastle, KwaZulu-Natal, South Africa. She is currently 24 years old.

Nandi is the daughter of Mduduzi and Zandile Mbatha. While she has always been so conservative when it comes to her family, she describes her father as an intellectual. This is evidenced by his work as a magistrate. Her mom, Zandile Mbatha, on the other hand, is a teacher.

Along with Nandi, her parents have two other daughters. Nandi has an elder sister named Pamela Mbatha who works as an accountant. Her younger sister, Azanda Mbatha, is still an undergraduate. Although there isn’t much more information about her immediate family other than those mentioned above, Nandi describes her small middle-class family as her strongest fan base.

For her education, Nandi Mbatha attended the University of Johannesburg where she studied public management and government science before dropping out because that was not what she wanted. Later on, she went for a Law degree at the University of South Africa but dropped out again because of personal reasons she did not reveal to the public.

She Prides Herself as a Black Zulu Girl

Nandi Mbatha prides herself on her origin as a black African Zulu girl. The Zulu clan is a respected one with very sacred beliefs passed down from generation to generation. Nandi often talks about her culture which she values a lot and the fact that her father, Mduduzi Mbatha, who is a strong Zulu man, raised her to value her origin and culture.

Nandi was Diagnosed with Anxiety Disorder at Age 13

Although Nandi seems to be comfy in front of the camera lens, she still has an area of her life that she has been managing and it has to do with her mental health. She was diagnosed with an anxiety disorder when she was just 13 years old. It was not easy thriving in the entertainment industry especially following her anxiety disorder, however, she has found a way to manage it.

Her apprehension is usually triggered by stress and enclosed spaces, so, she thrives in small groups than in crowds and her family has helped her so well in managing this and thriving in her chosen career irrespective of the challenges it sometimes poses.

Besides her family members being a solid support system, Nandi has also mastered other coping mechanisms that she relies on when the need arises; “If I’m in a stressful situation, I take Rescue Remedy pills to calm me down. I take them at least three times a week.” she says in an interview.

Nandi Mbatha has always described her journey as an evolving one. Though she always had a very keen interest in the movies, she started her career with a few modeling roles in her teenage years and only fantasized about the movies or the characters she admired amongst them. The modeling roles she started with were not so popular but just minor ones as she combined everything with her studies.

As a model, she has gotten to work for Quiteria Atelier in Paris fashion week. She was one of Quiteria Atelier’s ready-to-wear Rainard Ambassadors for 2020. This is her biggest modeling gig so far. Nandi has also worked with brands like Coca-Cola, Fila, Khosi Nkosi, Cadbury, and so on. She also claimed to have done a few adverts for some local brands though these brands were not mentioned in detail.

Currently, Nandi has announced that she’s taking her modeling career to another level by starting modeling classes for upcoming models. This would give her more confidence to allow her to thrive in the industry.

Nandi Mbatha naturally had a unique love for movies and so wanted to become an actress from an early age. Having started out as a model, it was not only until she got into her early twenties that she kickstarted her acting career. This happened after she saw the audition call for the Mzansi Magic telenovela, Isithembiso.

Though it was a big role for a novice like her, Nandi demonstrated great confidence and faith in going for it regardless of being the last person to audition. As fate would have it, the 20-year-old ambitious Stargirl got the role after demonstrating the innocence needed for the character, especially after a kiss scene with the famous international actor, Zamani Mbatha.

Nandi would end up landing the role of a rural girl on Isithembiso who relocated to Jozi to hunt not just for fortune but familial ties, opportunities, and education. Though she struggled with adapting to a major TV role at the start, she said her passion to become better and build an outstanding acting career kept her going. Soon, she gained mastery of her lines and did more research on her character role.

Other veteran actors that starred in the show with her were Hamilton Dlamini and Meschack Mavuso. She called them her role models in the acting industry and highlighted that they helped her fit into her acting career better.

People complimented Nandi Mbatha’s performance in her Isithembiso role because of how well it showed the way young people live and the challenges they face when they come to the big city. Essentially, it showed that all that glitters is not gold.

When asked about her natural blend with the character “Similindile”, she said she thought they were very similar but on the journey, she discovered they were very different. The character Simi was naive in discerning people but she is naturally good at that.

However, they both were very similar in terms of respect for people and the dignity that came with it. Her deep understanding of the role made playing the visual role outstanding. It was more than a script for her, she depicted the ability to live a story and let the viewers tell it.

The natural magic and blend she shared with her co-actor Zamani Mbatha also boosted the show. They were both excellent. It was not a surprise to see that her Simi role in the television series – which lasted for 3 years between 2017 to 2020, grew her a fanbase.

Many people who loved the storyline of the show were really sad when the head of publicity and local entertainment channels at Mzansi Magic, Philly Kubheka, confirmed that the show was ending. Reports came in that the show ended because it didn’t have enough viewership to stay on the air but Philly reaffirmed that it was one of their most outstanding shows. People had held on to it like it was an unending event but life had to move on.

Playing Simi in Isithembiso might be Nandi’s major role but not her only role; she has featured in other films. In June 2021, she announced via her Twitter handle that she was playing the role of Sam in Abomama season 2. She later said she’s building her craft to get more international roles to play.

Nandi Mbatha has a followership of over 830,000 on her social media handles due to the kinds of images she puts out. She has an interesting fashion style and is always seen wearing one designer brand or the other. Generally, her strong touch of feminity has attracted more fans to her.

Nandi is an upcoming talent still unbundling. She might not be at the peak of her career currently but she has a lot happening behind the scenes and she’s becoming a lot more like a super Stargirl.

Has Nandi Mbatha Received any Awards For Her Work?

Nandi’s acting career has earned her a few outstanding nominations at the DStv Mzansi Viewers’ Choice Awards (DStv MVCA). Even though she didn’t get any of the awards she was nominated for, the nomination alone shows how much value and recognition she has built for herself in the industry.