Rihanna Tattoos and their meanings part 1 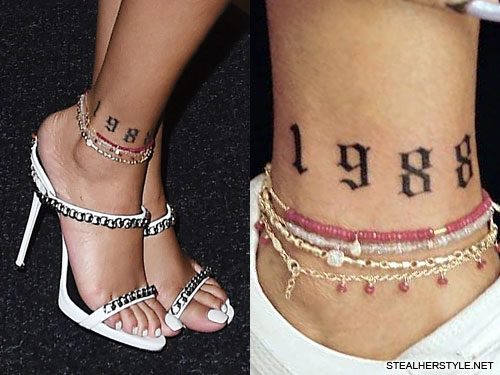 In August of 2015, Rihanna added fresh tattoos to her collection. At the Bang Bang Tattoo Parlor in NYC, she gets the year 1988 tattooed on her right ankle. Rihanna was born on February 20, 1988, in Antigua, Guyana. 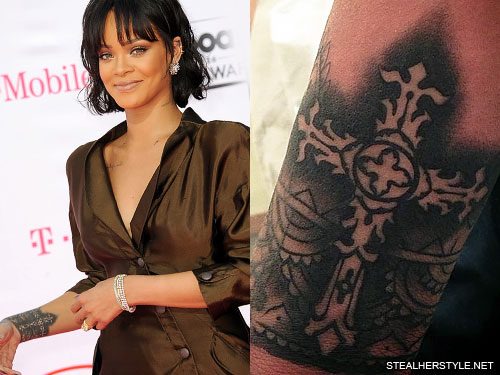 Rihanna got this cross tattoo on the inside of her right wrist from artist Bang Bang in January 2014. Negative space is used to create the complicated cross design, which is encircled by black ink. Rihanna also extended the henna designs, which had previously just been on the back of her arm, all the way up to the cross's edges, making the entire item one continuous piece. 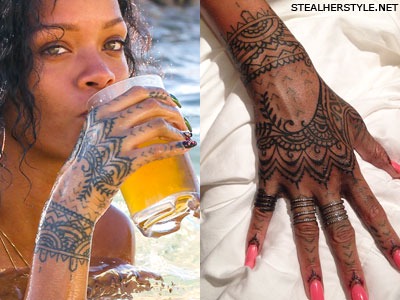 In October 2013, Rihanna completed her hand tattoo, integrating both the Maori tribal pattern around her thumb and the chevron lines. It's an abstract design inspired by henna painting in India. Bang Bang and Cally-Jo collaborated on the design as well as the execution of this tattoo. The two pulled out their needles and began working on various portions of the project at the same time. "After hours and hours of creating several patterns, @callyjoart and I finally found one that worked!" "I'm really proud of how nice it turned out," Bang Bang wrote. 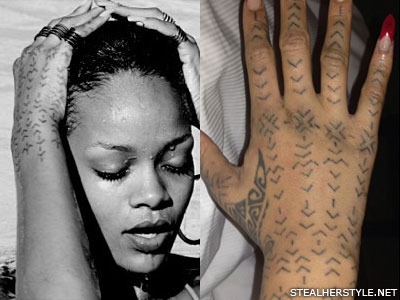 Rihanna expanded her hand tattoo in two sessions in October 2013. First she added these chevrons and lines all over her fingers, hand, and wrist. These lines are still visible through the finished tattoo. 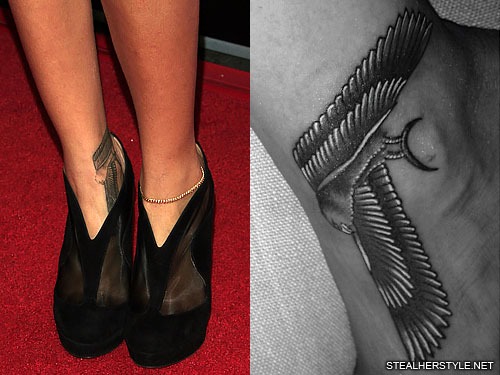 Rihanna removed her music notes tattoo in June 2012 and replaced it with a huge Egyptian falcon. “Falcon: a light that shines in the darkness!” she captioned a photo of the tattoo on Twitter. They should never close their eyes when sleeping.” "It's the first tattoo she wanted as a teen," Bang Bang, who inked this tattoo, told US Weekly. Back then, she wanted it across her back."

Although Rihanna could have drawn inspiration for the tattoo from a 2,300-year-old faience falcon, it appears that the bird has been tattooed to look like a revolver. The falcon is on exhibit at New York City's Metropolitan Museum of Art, where the tattoo artist does the majority of his work. 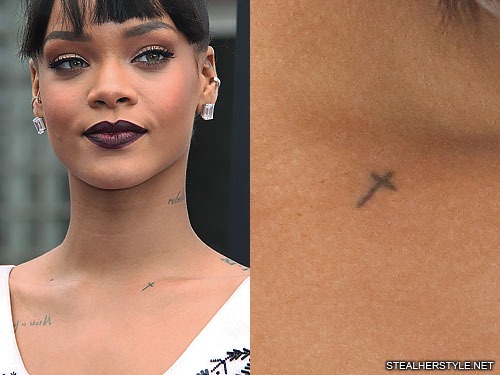 Rihanna got a small and simple cross tattooed on her left collarbone in March 2012. Bang Bang utilized the same procedure for the "Rebelle Fleur" tattoo on her neck to make the tattoo lighter by cutting the ink with water. Rihanna picked this location on her neck so that she can conceal it with a necklace when she wants to, but she can also show it off when she wants. 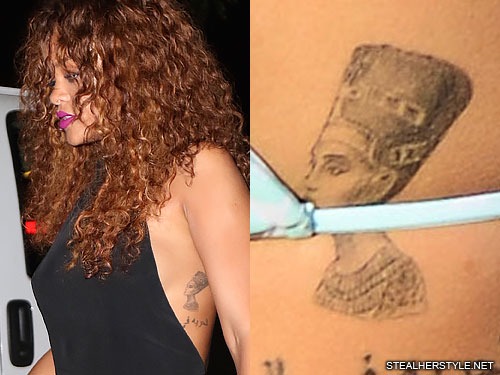 Rihanna debuted her new tattoo - a bust of the ancient Egyptian Queen Nefertiti – in a photoshoot with Terry Richardson in January 2012. Rihanna's tattoo has an unknown meaning, but because of its placement, it is rarely seen. Queen Nefertiti was known as the "Hereditary Princess," "Great of Praise," "Lady of Grace," and "Sweet of Love," among other names. 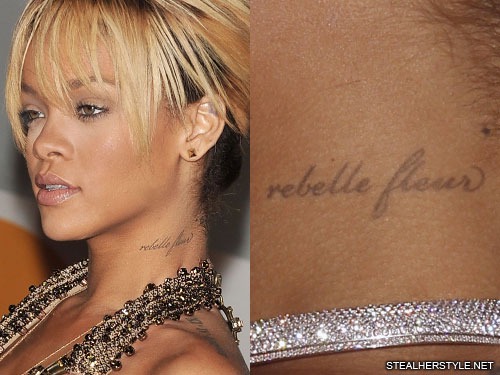 Rihanna got a script tattoo of the words "rebelle fleur" on the left side of her neck in August 2010. The tattoo means "rebel flower" in English. Many individuals suggested that the phrase should be "fleur rebelle," because the adjective is normally placed before the noun in French. Rihanna, on the other hand, insists that the tattoo is not a mistake. She wrote to the artist Bang Bang in a text message:

"Rebelle Fleur means rebel flower, not rebelious flower; there are two nouns here, thus fleur does not have to come first!" "Just in case they ask," says the narrator. 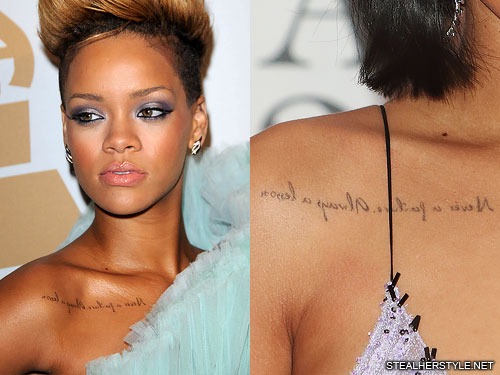 Rihanna had her personal mantra "Never a failure, Always a lesson" tattooed on the right side of her chest in December 2009. She can read it in the mirror because it's written backwards. Bang Bang, an artist, said:

“When I asked why she wanted it, she answered, 'It's kind of my life philosophy for everything.' Instead of thinking of things as mistakes, think of them as lessons.... She stated that she preferred gray over black because she wanted it to be more subtle.... She didn't want it to be too noticeable."

Hospitals have not had Covid-19 patients for weeks now. The reason for this left everyone in shock

Whatever you dream represents you when gifted spiritual

Bad news for the EFF