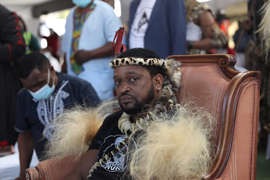 The sibling of late Zulu King Goodwill Zwelithini has guaranteed in court papers that the contested successor to the privileged position, Prince Misuzulu Zulu, is being introduced as ruler at a mysterious crowning ritual to be held this Friday.

Ruler Mbonisi Zulu has dispatched a critical application in the Pietermaritzburg high court, which he says is upheld by certain individuals from the regal family, looking for a request to stop the supposed crowning ordinance, information on which came "unofficially".

Ruler Mbonisi needs a request halting the service until the result of two related court applications, put down for hearing on December 7, in which Queen Sibongile Winifred Zulu, the primary spouse of the late lord, is looking to make a case for a large portion of his home through her marriage in local area of property.

In the subsequent application, her little girls, princesses Ntandoyenkosi Zulu and Ntombizosuthu Zulu-Duma, are testing the genuineness of the late lord's will, guaranteeing his mark was produced.

They likewise debate that the late lord, who passed on March 21, needed Misuzulu kaZwelithini, the oldest child of his third spouse, Queen Mantfombi Dlamini-Zulu, to assume control over the privileged position.

The lord took six spouses. Sovereign Dlamini-Zulu is said to have had raised status since she was from Swazi sovereignty. She was selected official during the hour of grieving, however died on April 29, making ready for her oldest child to assume control over the privileged position.

Ruler Mbonisi, in his earnest application, needs the court to boycott further advances which might be understood as perceiving Misuzulu as lord.

He said he and others "learnt unofficially" about the crowning ordinance.

He said in view of division in the regal house over who ought to succeed, there was no trust among individuals.

"I, along with others, met to examine the veracity of the bits of hearsay. We counseled our lawyers and sent letters to [Misuzulu and Prince Mangosuthu Buthelezi] asking that they either verify or refute what was happening.

"They didn't react. I present this backings the bits of hearsay."

He said assuming the crowning celebration went on it would bias the result of the forthcoming court applications and "further gap" the imperial family.

Buthelezi, who is customary head of the state of the Zulu country, is restricting the application and has rejected that a crowning liturgy is being arranged.

In his affirmation, he said just the regal places of five ruling (presently perished) lords have any acknowledgment.

Sovereign Mbonisi and others reserved no option to assemble conferences and settle on choices since he was not piece of the "center construction" of the regal family.

Buthelezi said he had freely expressed that there would not be a crowning celebration until the legal disputes had been finished and that Mbonisi was "talk mongering".

"The cycle paving the way to a crowning celebration has five levels. A function can't happen before a perceived testament is distributed in the public authority newspaper and the chief organizes the service," he said.

It may be the case that Prince Mbonisi had become confounded by an arranged private family conventional custom wherein the ruler is "guided into the kraal" where precursors rest, he said.

"I highlight the occasion is absolutely a private matter. It doesn't in any capacity general an extraordinary service organized by the head to certify the designated and perceived lord. It is one of the five stages I have insinuated," he said, asking that the application be excused.

The two applications, to be heard on December 7, are additionally being gone against by Buthelezi.

He said Prince Misuzulu's case to the privileged position was an inescapable end product, lawfully and socially, and has denied the will is an imitation.

He contended that Queen Sibongile Winifred Zulu can't, 50 years on, "wish away" the ruler's different spouses and that the common marriage, finished up after the customary function, was "insignificant" and an "waste of time".

Buthelezi has gone under close to home assault. The sovereign and princesses said he has no legitimate remaining to engage in one or the other matter and, generally, is interfering in another man's undertakings.

They contended that his situation as "state head" of the Zulu country isn't perceived by the Traditional Leadership and Governance Act, he is definitely not a recipient of the contested will and the issues with respect to the legitimacy of the late ruler's relationships are "just the worries of the sovereigns".