A timeline of the Rise and Fall of Elizabeth Holmes

By Niito (self media writer) | 5 months ago

In honor of Hulu's new series The Dropout, here's everything you need to know about Elizabeth Holmes and her multimillion-dollar scam, Theranos. 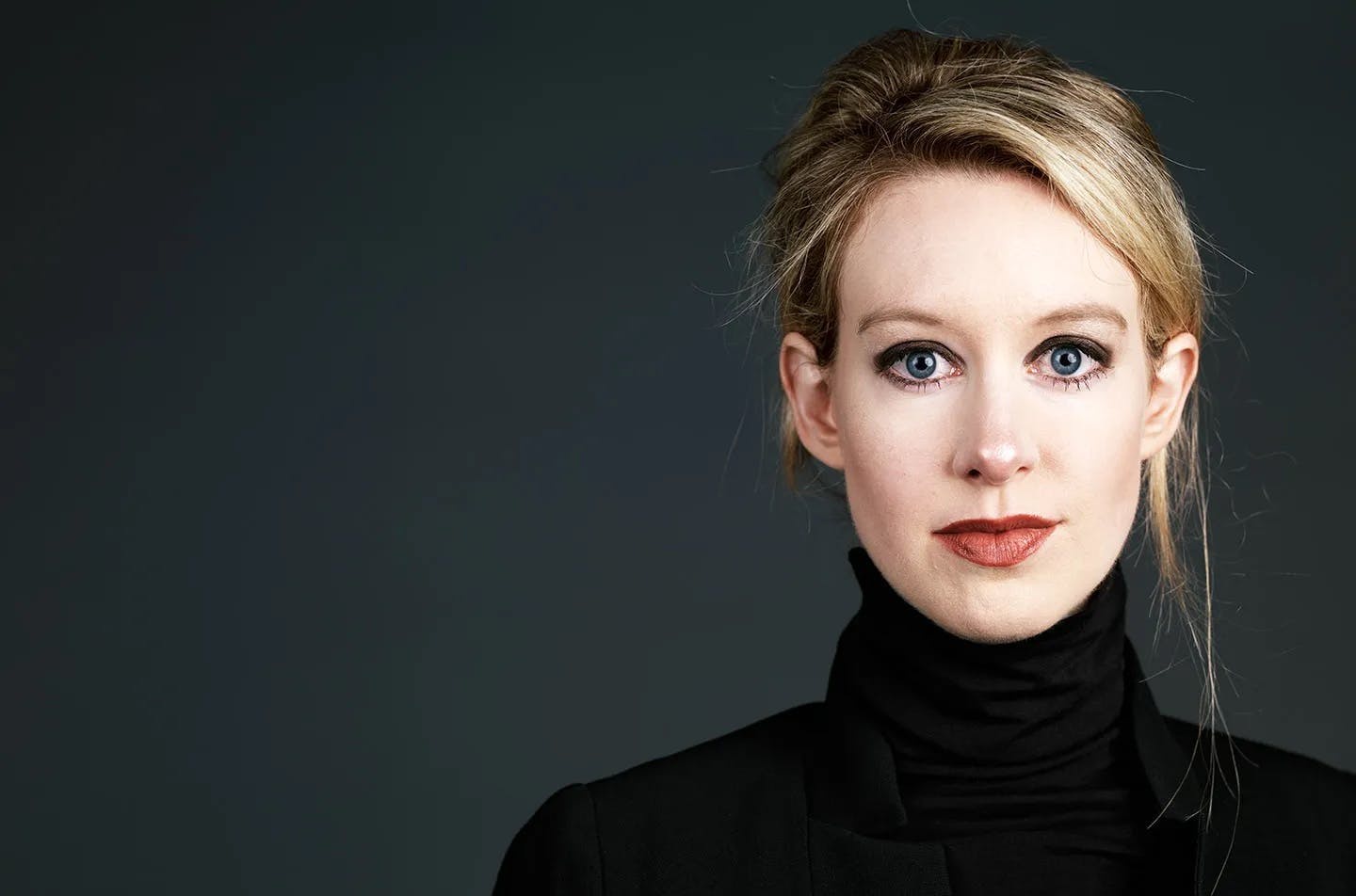 After dropping out of Stanford in 2003, Elizabeth Holmes became a big name in the medical world. She set out on a venture to create a company that would produce medical innovations. She founded Theranos and claimed that the company had created a device that would perform quick and accurate blood tests with only a small amount of blood.

Now, Holmes is known as one of the biggest scammers in medical history and is the subject of Hulu's newest series, The Dropout, starring Amanda Seyfried. In order to catch up on your Holmes history, here's a timeline of all of the events that played a role in the Theranos scam. 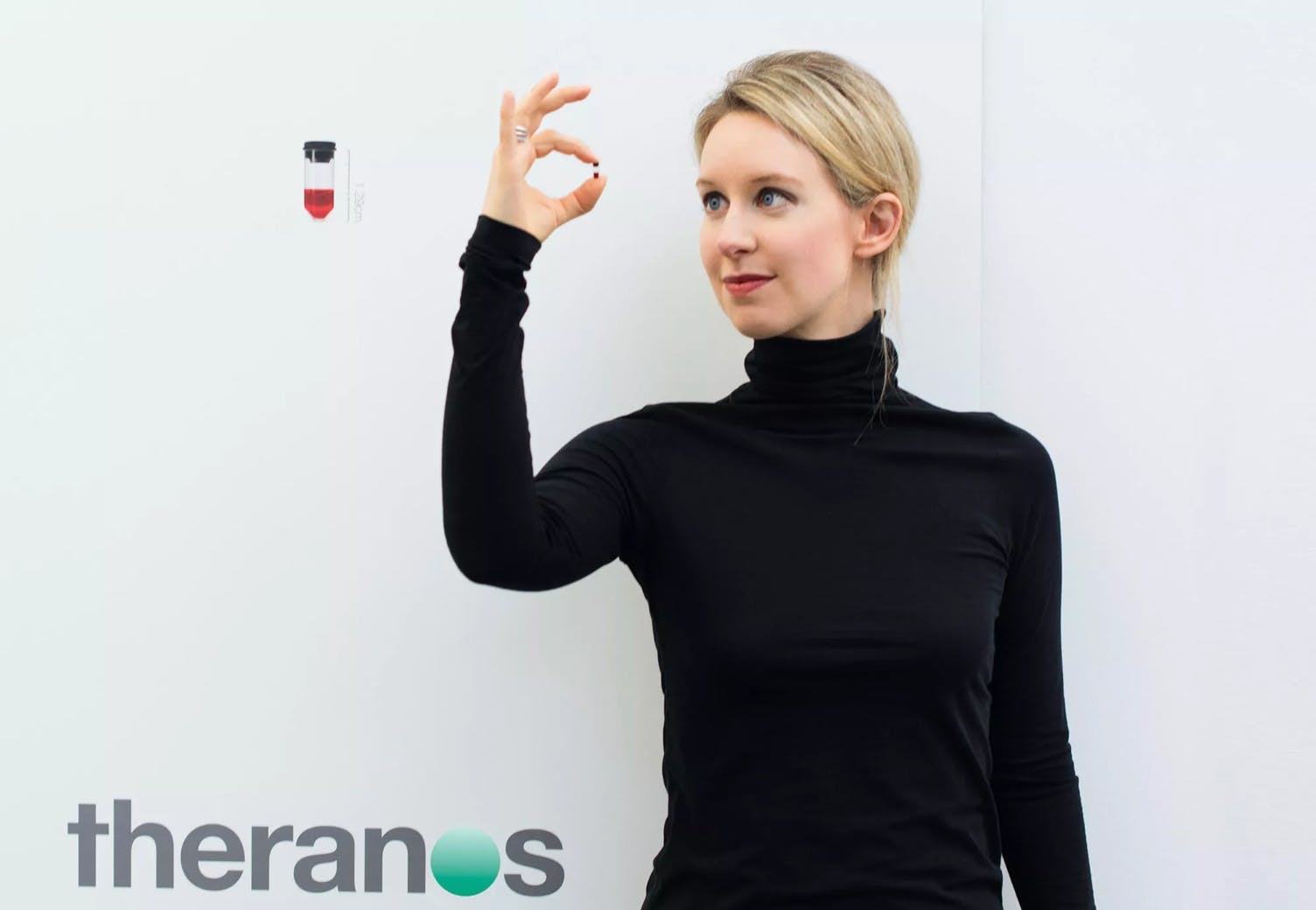 At the ripe age of 19, Stanford sophomore Elizabeth Holmes drops out. As a future chemical engineering major, Holmes wanted to fast-track her career. She had an idea for a medical company, and thus Theranos was founded after her departure from the Ivy League school.

After five years of Theranos beginning to pick up, the company announces that businessman Ramesh "Sunny" Balwani will join as the chief operating officer and president. Holmes and Balwani met in Beijing on a Stanford trip in 2002 and were later revealed to be romantically involved. 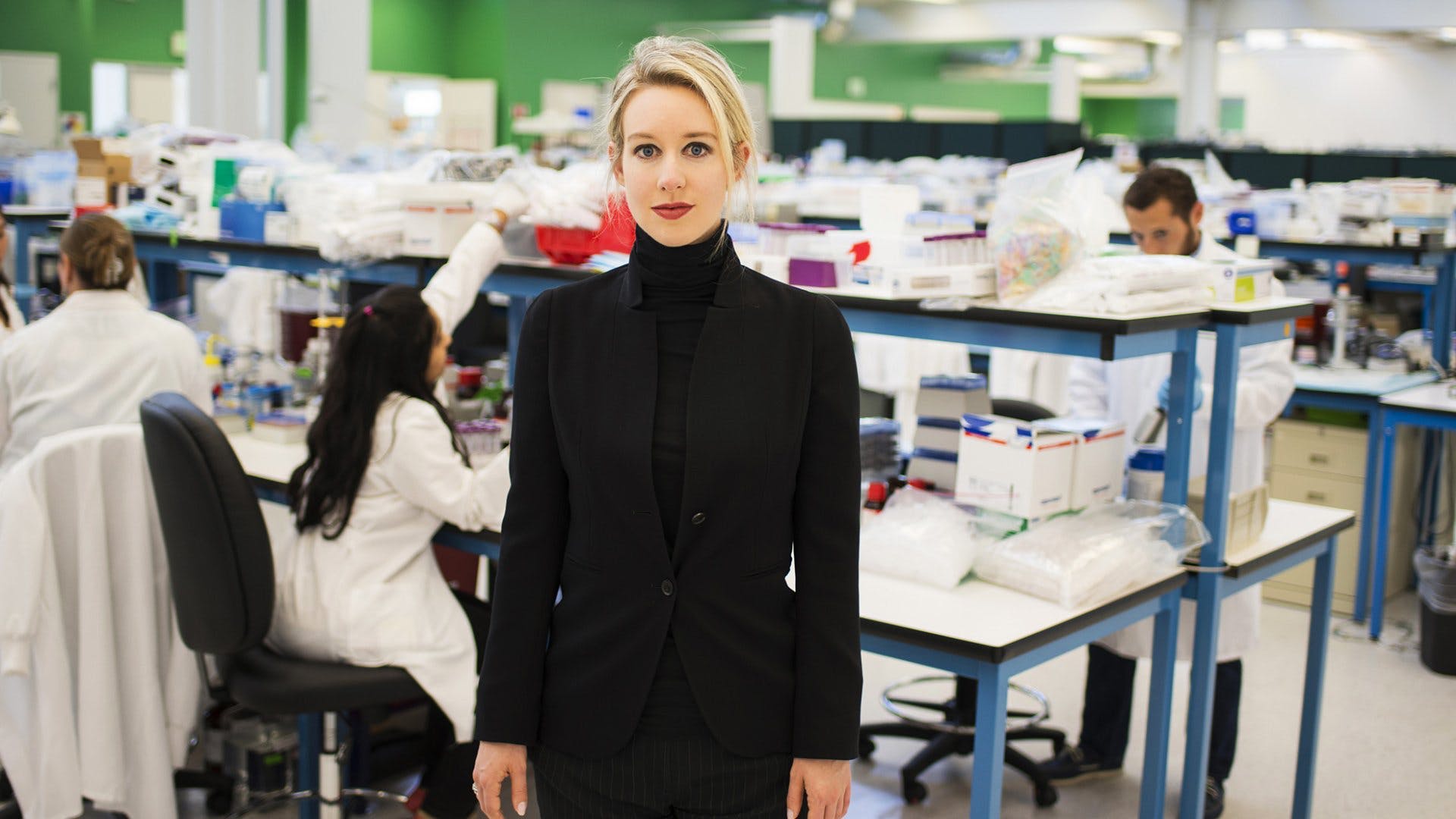 After a decade of waiting, Theranos finally opens. In the same announcement, Holmes attracts media attention by saying the company has signed a long-term partnership with Walgreens. The first Theranos Wellness Center location opens in a Walgreens in Palo Alto, and consumers were invited to try the Theranos blood test.

After a year of having her startup officially open, Forbes names Holmes as one of the richest women in America. At the time, her personal wealth was estimated to be $4.5 billion, and she owned a 50 percent stake of Theranos stock. In the same year, Holmes had raised more than $400 million for her company.

This is the year when things start to get rocky for Holmes and Theranos. After getting FDA approval to use its blood test to test for Herpes Simplex 1, the company becomes the subject of a Wall Street Journal investigation. WSJ reported that Theranos was only using its technique on a small number of the 240 tests it performs and that the majority of tests were conducted via vials of blood from the arm, not small finger-prick samples. This caused the company to halt the use of its blood collection vials for all tests except Herpes tests.

Holmes denied all accusations at the Wall Street Journal technology conference in Laguna Beach, CA. After the controversy, Theranos fired former U.S. Secretaries of State Henry Kissinger and George Shultz from its board of directors and moved them to a new board of counselors. Theranos formed a separate medical board as well.

Towards the end of 2015, Safeway dissolves its relationship with Theranos after investing $350 million into building clinics in its supermarkets that would offer the Theranos blood tests.

2016 is a nightmare of a year for Holmes and Theranos. After their California lab receives a letter from the Centers for Medicare and Medicaid Services (CMS) stating that they were in "immediate jeopardy" for not following federal standards, Walgreens pulls back. The company says it would no longer send its lab tests to any Theranos facility in California and suspended Theranos services at its Palo Alto location.

CMS then threatens to ban Balwani and Holmes from the laboratory business for two years after the company failed to fix the issues at its California location. After all of this commotion, Balwani steps down from his position and the company hires Fabrizio Bonanni, a former executive vice president of biotech firm Amgen, former CDC director William Foege, and former Wells Fargo CEO Richard Kovacevich. In the wake of all of this, Theranos voids two years of blood test results from its testing devices.

Holmes's net worth dropped from $45 billion to $0 according to WSJ. Additionally, Theranos' value dropped from $9 billion to $800 million. Holmes is then banned from running any labs for two years after CMS revokes her license to operate. She tries to move past this by opening a mini testing laboratory called MiniLab. Since she was only selling the MiniLab device, she was not in defiance of her CMS ban. 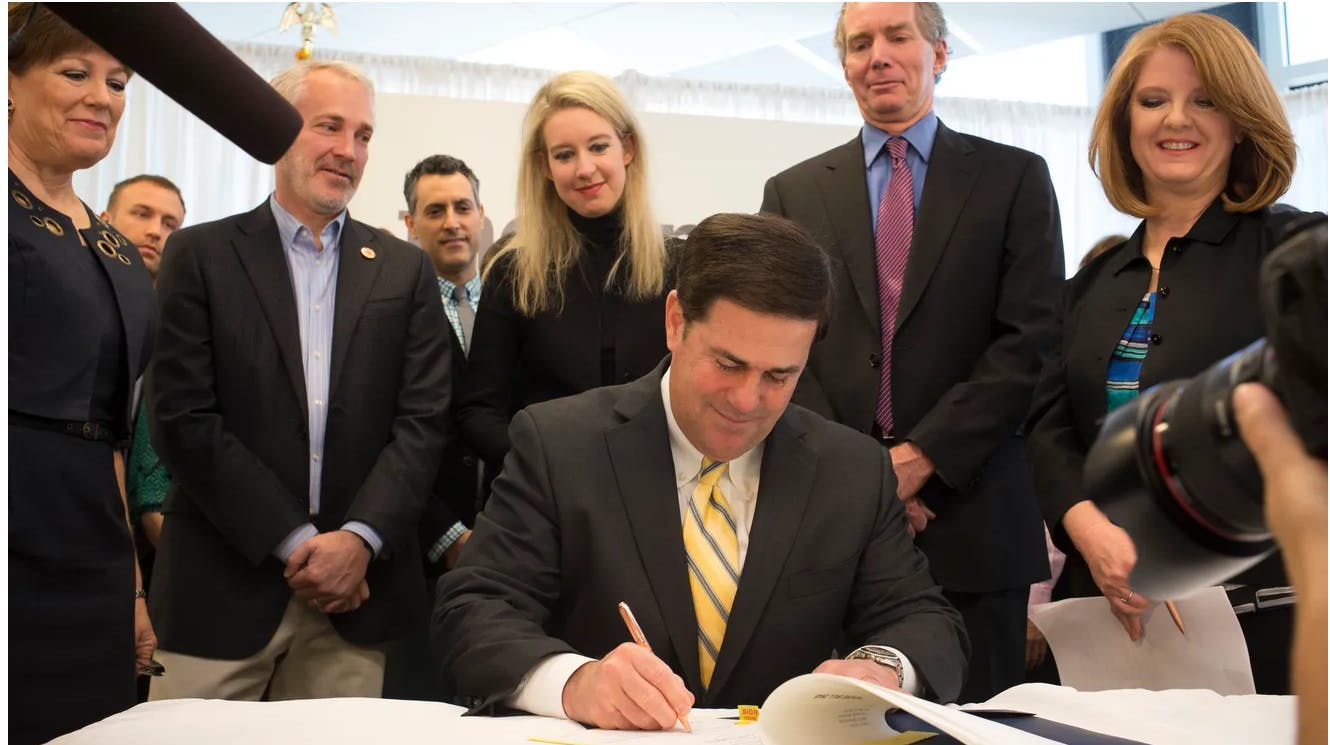 Theranos is forced to downsize yet again following the backlash the company faced in the year prior. The company laid off about 155 employees, and failed a second regulatory lab inspection, resulting in the shut down of its last blood testing location.

Theranos settled with CMS for $30,000 and agreed not to own or operate any clinical labs for another two years. The company also settled with Arizona Attorney General Mark Brnovich after it was accused of misrepresenting the method, accuracy, and reliability of its blood testing, and for not following federal regulations. Arizona was given $4.65 million to reimburse its Theranos customers.

Holmes and Balwani face charges for massive fraud by the SEC. After scamming more than $700 million from investors, the pair finally meet the consequence of their actions. They're accused of knowing that their blood test could only perform 12 of the 200 tests it was advertised to do. Theranos and Holmes agree to resolve the claims, and she gives up control of the company and the majority of her stake. Balwani fights the charges and states he "accurately represented Theranos to investors to the best of his ability."

John Carreyrou, the reporter who first broke the Theranos story for WSJ publishes Bad Blood, a book detailing what went on inside Theranos. The book was turned into a movie starring Jennifer Lawerence as Holmes.

Holmes and Balwani are charged with criminal fraud on the grounds that they were trying to scam investors, doctors, and patients. Both plead not guilty. Before the charges were announced, Theranos releases a statement saying Holmes has stepped down as CEO and David Taylor is taking over her position. This wasn't enough to save the company, and Taylor announces the dissolution of Theranos in September of 2018.

A court document is released that stated Holmes is going to seek a "mental disease" defense in her criminal fraud trial. She will claim that she is the victim of an abusive relationship with Balwani, and this results in the separation of their cases. Initially set to start in July of 2020, Holmes's trial is pushed back to July 2021 due to the COVID-19 pandemic. Balwani's trial date is set for 2022. 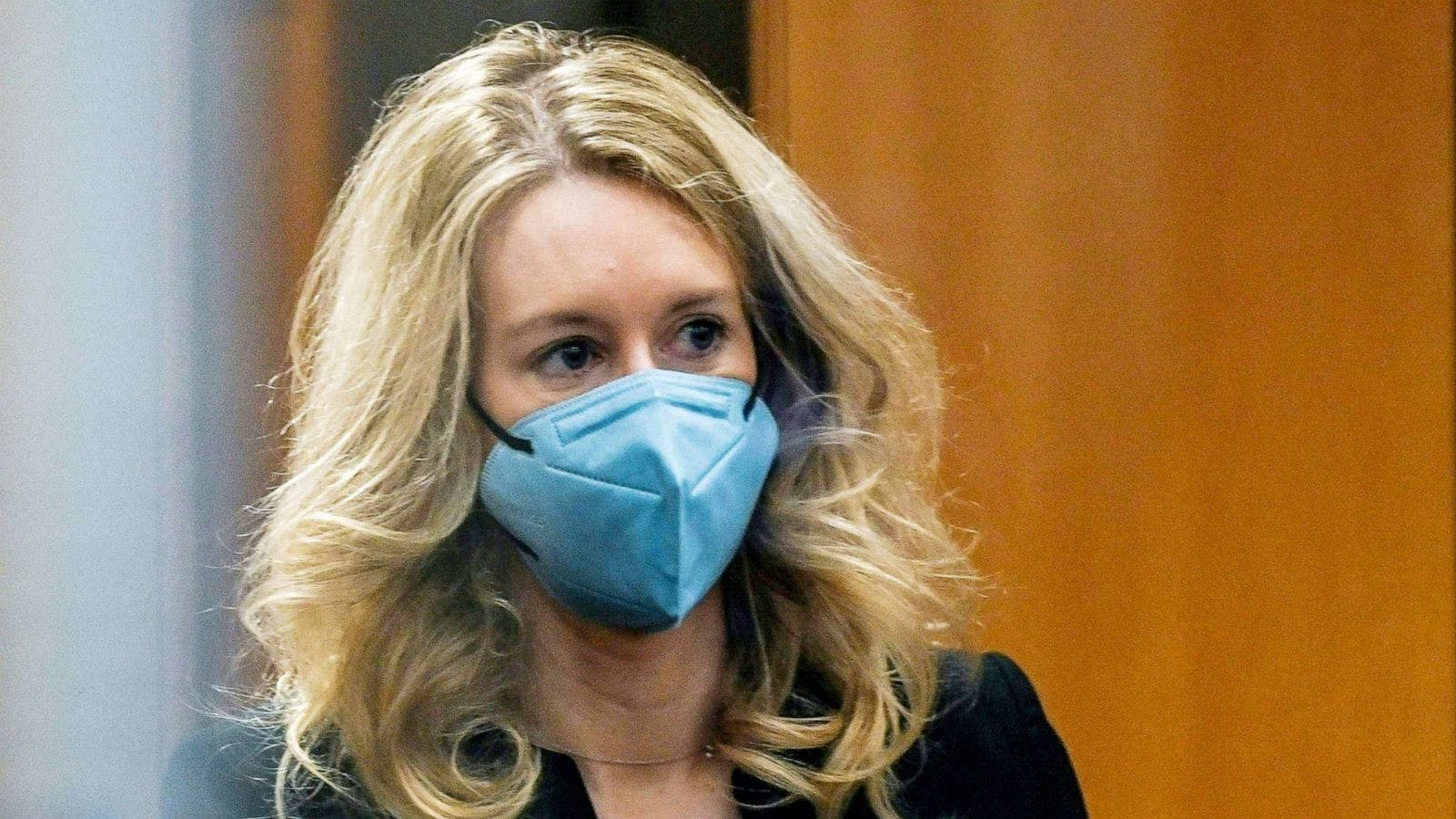 After a year of waiting, Holmes's trial is pushed back until August because she is due to give birth in July. After three months of hearing witness testimonies, the jury begins debating her fate. The jury spends over 50 hours deciding what to do and doesn't reach a verdict until January of 2022. 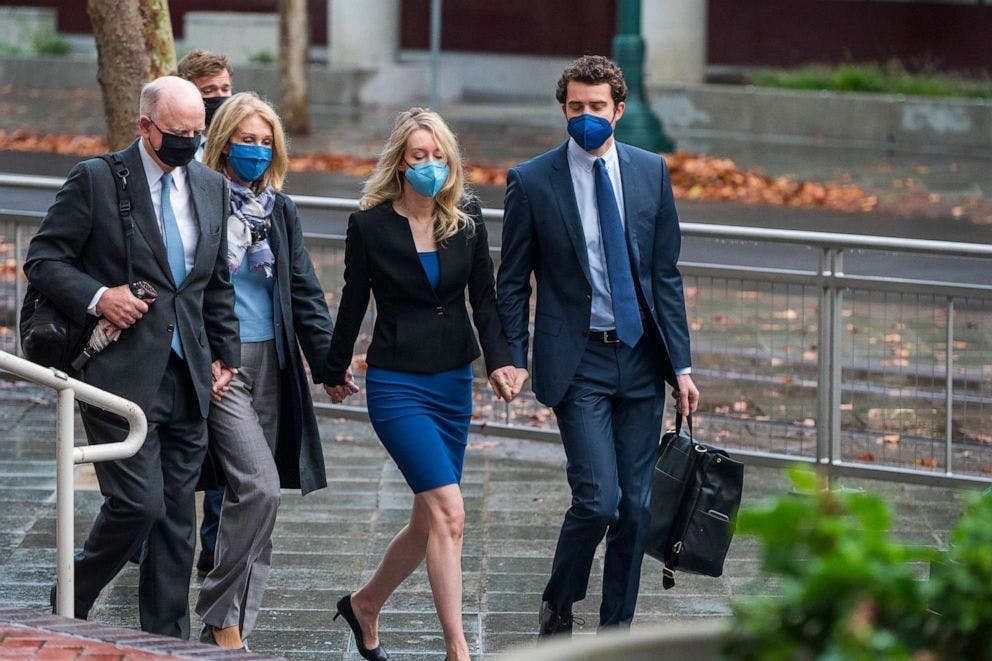 After years of controversy, Holmes is found guilty of one count of conspiracy to defraud investors as well as three wire fraud counts tied to specific investors on January 3. She faces up to 20 years in prison, as well as a fine of $250,000 plus restitution for each count. As of now, Holmes's sentencing date is set for September 26 of this year. It is assumed that she will be set free on bail, but she will not see prison time until after her sentencing.

Zuma's daughter is being investigated for July unrest