Watch: Andile Mpisane disappoints fans with his send-off performance at Konka, struggles to get them 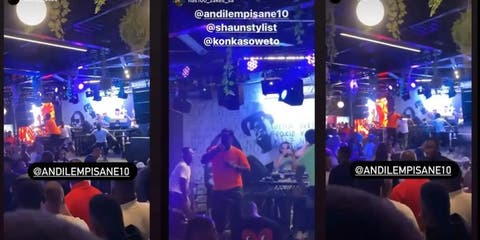 After announcing that he will be one of the opening acts for the Legendz of the Streetz Tour, Andile told his fans and followers that he’d be performing at Konka as a warm-up before him jetting off to the states. Last night he went to Konka and the audience did not move an inch with his performance.

Stunt before going to Konka

Well, we all know Shauwn Mkhize’s son will flex and stunt on all of us whenever he can. Before going to Konka, he and his best friend, Shaun Stylist, wore matching Versace robes and sang Ubala. They were outdoors and drinking very expensive bubbly.

Andile is known for his energy when performing, but his talent is questionable He doesn’t perform all the time, but when he does, he sometimes delivers and sometimes doesn’t. He was on the stage performing his new single Ubala, and the crowd was seemed uninterested, but one of the most spectacular factors about the performance was that his background dancers were on point. 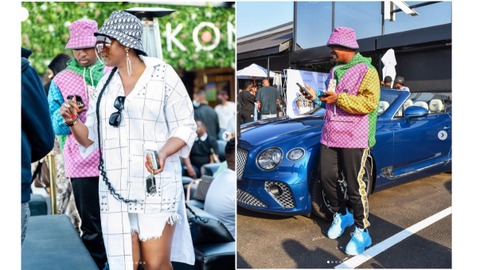 Andile took his usual two with; his best friend Shaun Stylist and his wife, Tamia Mpisane. Shaun is the party’s life, and as usual, he was entertaining with his stunts and dancing. He took out a bottle of cologne and sprayed it all over one of his friends.

Konka is one of the most expensive clubs in the country. Andile was given a shoutout when he ordered bottles and bottles of Hennessy, Ciroc, Champagne, and many more. He brought the entire club to a standstill when the promoters got his drinks.

Matching outfits with Mrs. AM

Andile and Tamia are a young couple, and wearing matching clothes seems almost mandatory. They wore orange t-shirts and orange shoes. Tamia’s sandals were Prada, and she carried a Balenciaga bag.

Now, Andile will be jetting off to the states to perform at the Legendz of the Streetz tour. His mother, Shauwn Mkhize, announced that she’d be going to watch his son perform; we’re yet to see how it’ll be.