Flamboyant and fantastical, Elton John’s outrageous sartorial choices have become as pivotal and as groundbreaking as the Rocket Man’s greatest musical hits. 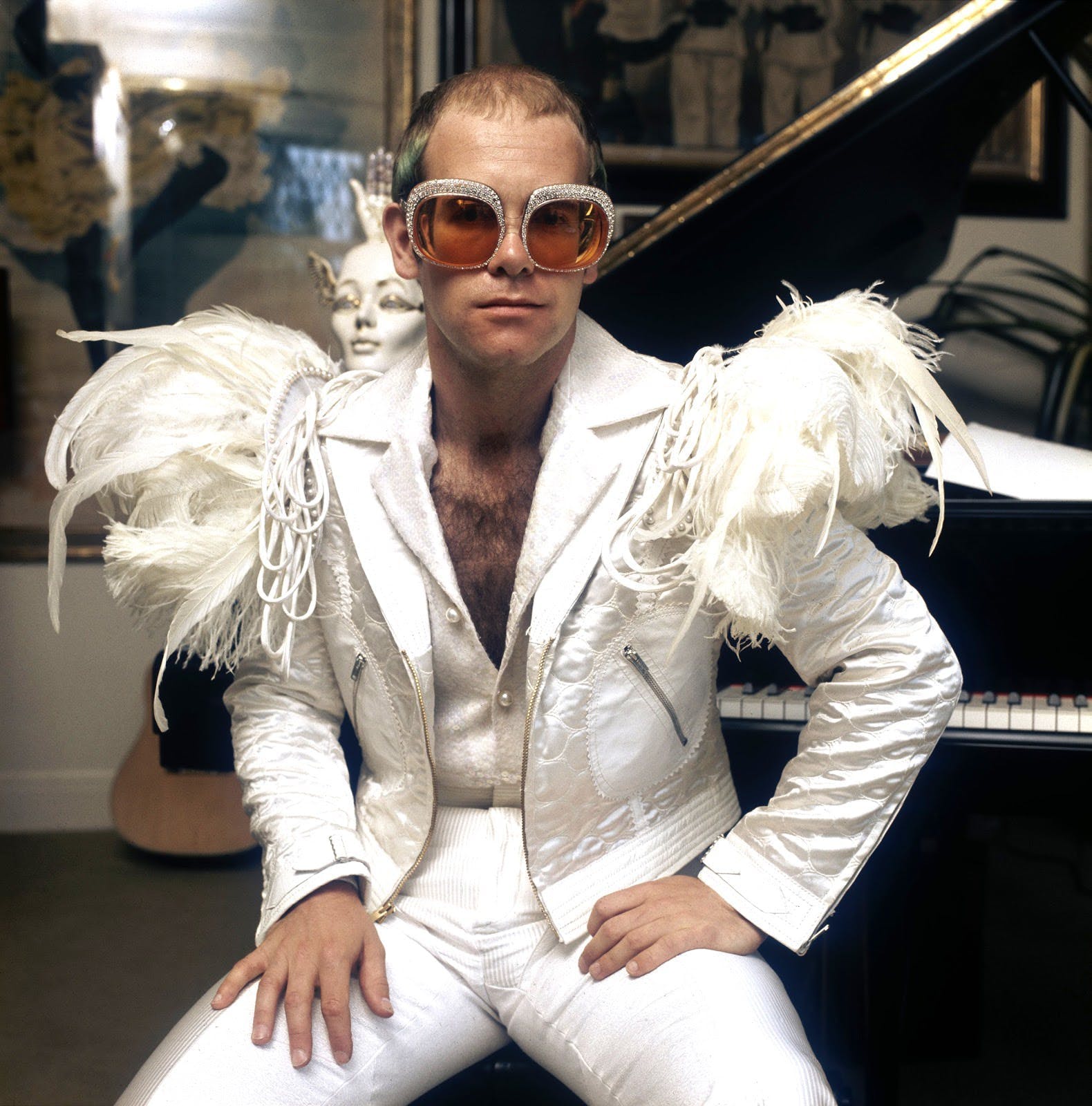 As glamorous as one can be, Sir Elton John’s musical genius is far from the only enduring impact he has left on the zeitgeist. Full of fashionable fanfare, the Tiny Dancer singer’s costumes and everyday garb have consistently been larger than life. His impressive collection of flashy signature sunglasses is merely the cherry on top of John’s everlasting eccentric ensembles. Always providing a hefty dose of glitz and glam, John’s musical and sartorial notes have inspired the likes of chart-topping superstars, from Lady Gaga to Harry Styles and Miley Cyrus. While it’s clear that the showman has left an indomitable mark on music, his outrageous, subversive wardrobe has influenced the likes of fashion houses from Versace to Gucci. With his story having recently been charted in the Oscar-nominated film Rocket Man, so too was his bedazzled, feathered, theatrical pervasive stage-wear, often created by fashion visionaries like Bob Mackie and Yohji Yamamoto. In honor of the British renegade’s 75th birthday, L’OFFICIEL takes a look back on Sir Elton John’s unrivaled, extravagant fashion moments. 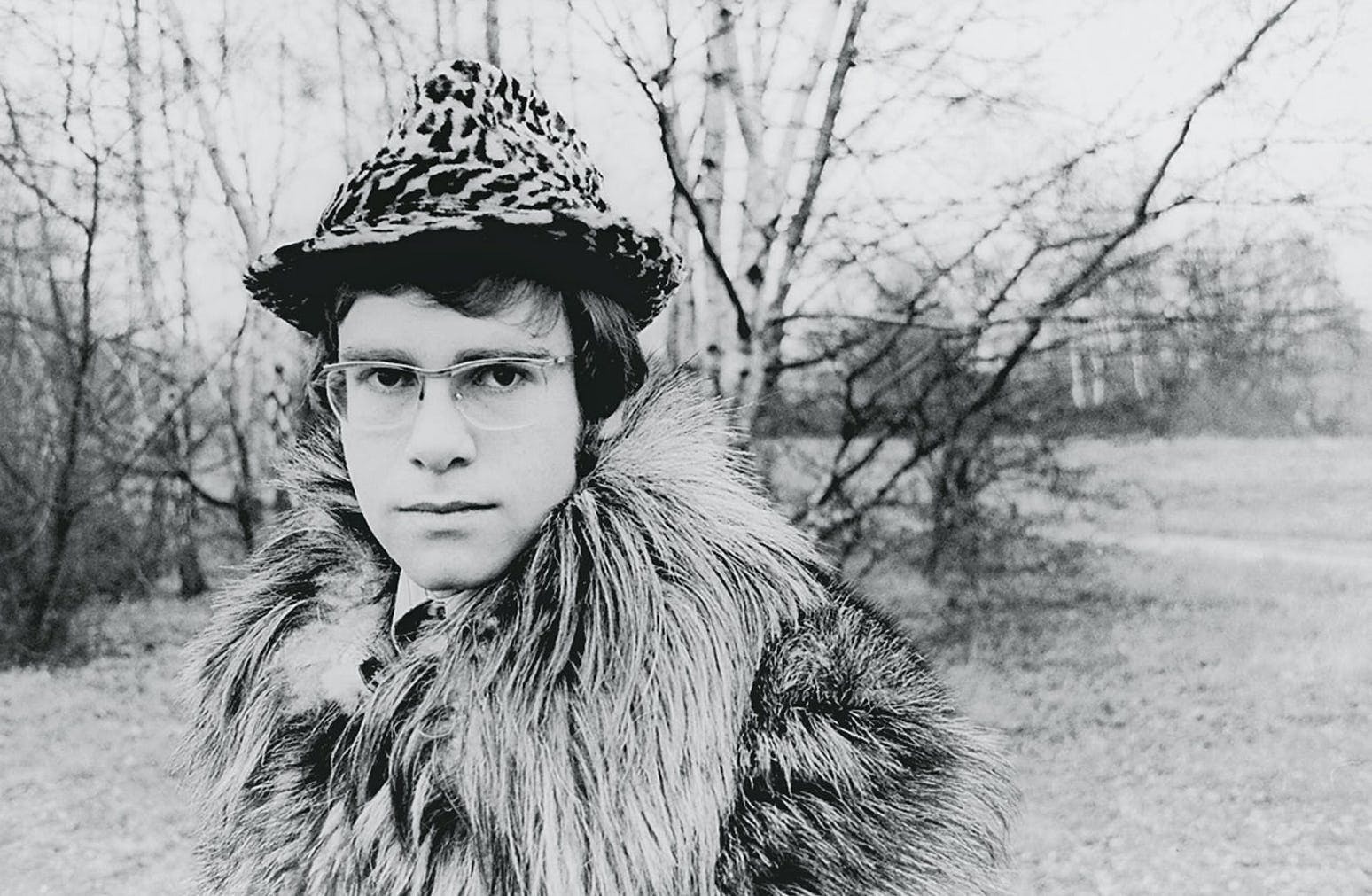 John wears a printed hat with a fur coat for an early publicity picture in 1968. 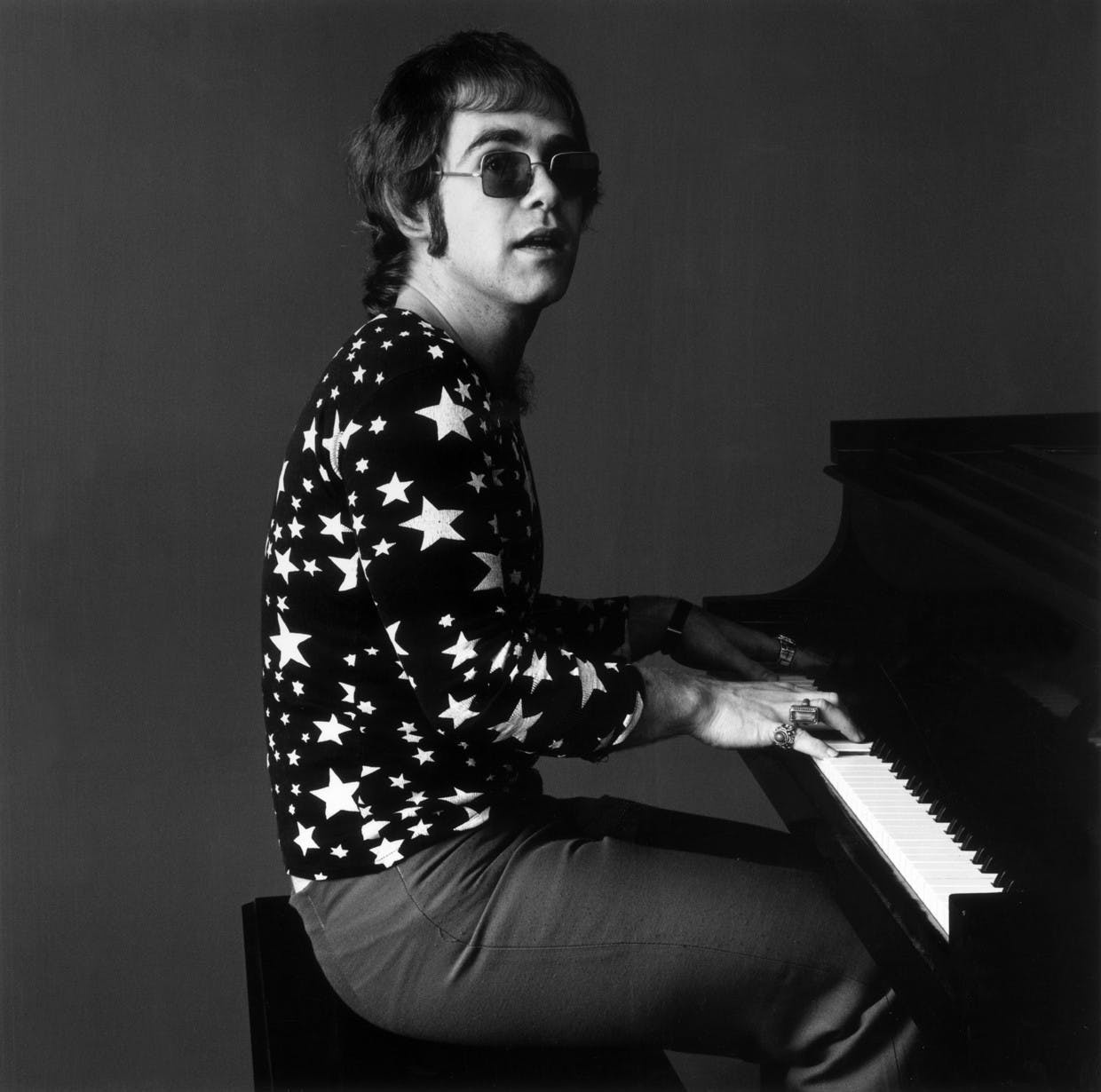 The musician plays piano in a star print top and tinted shades in 1970.

Smiling in a patch and pin-covered denim set, John shows off his playful fashion sense.

The star performs in a marching band-inspired look with fur and rhinestones in 1974.

A bumble bee striped sweater stands out on stage in 1974.

John tops a velvet suit with rhinestone sunglasses, one of his favorite accessories throughout his career.

Receiving a star on the Hollywood Walk of Fame, John dresses for the occasion in a star-covered three-piece suit.

The jumpsuit became one of the performer's go-to stage looks and was emblematic of the '70s era in which he rose to fame.

For his 1975 concert at Dodgers Stadium, John embraces the baseball theme in a now-iconic bedazzled uniform.

Joined by Cher and Diana Ross, the trio of music legends look glamorous for the Rock Music Awards in 1975.

Stars and stripes make for a bold on-stage look.

Performing on "The Muppet Show," the star goes all-out in a feathered ensemble.

The singer dresses up as a sparkling Statue of Liberty.

John laughs with fashion designer Gianni Versace, who was a close friend to the "Tiny Danceer" star. John even devoted his 1997 album 'The Big Picture' to the designer who had died earlier that year.

With a Marie Antoinette-inspired wig, John attends his 50th birthday party decked out in a regal ensemble.