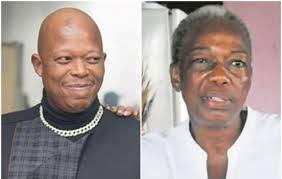 Mampintsha and his family are reportedly at loggerheads, this comes after he accused his mother Zama Gumede and his sister Pinkie Gumede of speaking ill about him to the producers of his reality show with his wife Babes Wodumo, Uthando Lodumo.

Zama claimed that her son is angry at her because she exposed him saying "He called and accused me of bad mouthing him to Showmax and the producers. He's angry that I exposed him. He said he wants nothing to do with us because we're jealous of his success".

The mother and daughter duo, who expected more than the money they were given, put Mampintsha and Showmax on full blast.

Zama also accused Mampintsha of disowning them, saying she does not care as he doesn't support them financially.