15 Celebrity Couples Having A Moment On The Beach

By Newsgod (self media writer) | 14 days ago

The rich and famous try to keep their private lives private, but celeb couples like Katy Perry and Orlando Bloom can't resist romance at the beach. 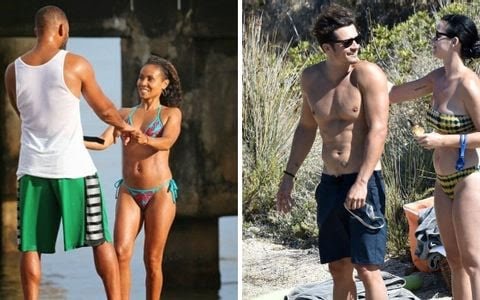 While the rich and famous often try to keep their private lives private — occasionally we do get to see glimpses of what it’s like to be famous and in love. Today we thought we would take a look at some of our favorite celebrity couples spending a day on the beach and if you keep on scrolling you’ll see plenty of adorable moments of affection. From Taylor Swift and Joe Alwyn giggling in the water to Beyoncé and Jay-Z showing everyone how beach pics are properly done — this list is filled with plenty of A-list couples showing each other some love on the beach.

Alright, now here they are 15 celebrity couples having a moment at the beach!

15. Let's Start Off With Joe Jonas And Sophie Turner Exchanging A Loving Kiss 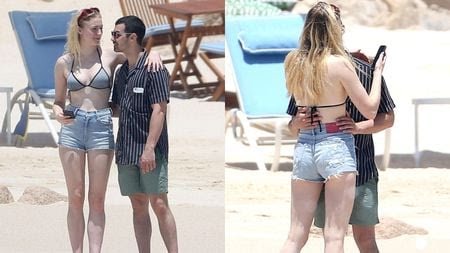 To kick our list off we decided to go with the singer Joe Jonas and his wife, actress Sophie Turner. The two were spotted walking along the beach and enjoying the lovely weather but of course — at some point, the two lovebirds had to exchange a loving kiss!

14. Here Are Leonardo DiCaprio And Camila Morrone Hugging In The Water 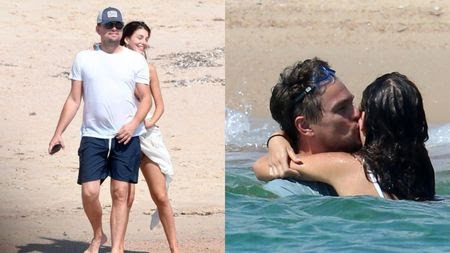 Next on our list are Hollywood star Leonardo DiCaprio and his girlfriend, model Camila Morrone. As you can tell from the pics above, the two had a blast at the beach and were spotted giggling while walking — as well as giving each other little kisses in the water!

13. And Chrissy Teigen And John Legend Just Couldn' Keep Their Hands Off Each Other 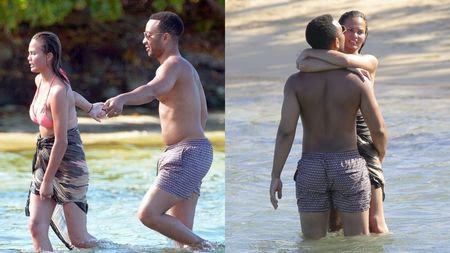 Model Chrissy Teigen and her husband, singer John Legend also made it onto our list as the two just couldn’t keep their hands off each other during their trip to the beach. With Chrissy and John, you can definitely always tell that love is in the air!

12. Shawn Mendes And Camila Cabello Went For A Dip Together 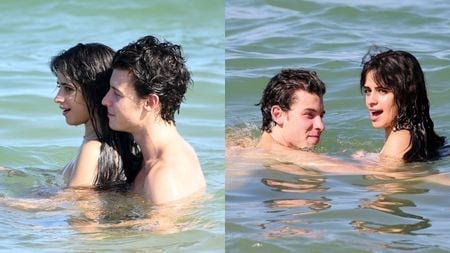 Let’s move on to singers Shawn Mendes and Camila Cabello who were also spotted enjoying each other’s company in the water. The two definitely exchanged quite the amount of hugs and kisses before they spotted the paparazzi snapping pics of them!

11. Heidi Klum And Tom Kaulitz Walked Along The Beach 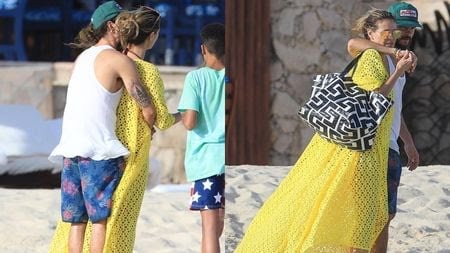 German supermodel Heidi Klum and her husband, singer Tom Kaulitz are yet another famous couple that is frequently spotted spending some quality couple time on the beach. In the pics above, you can see the two hugging each other during one of their walks! 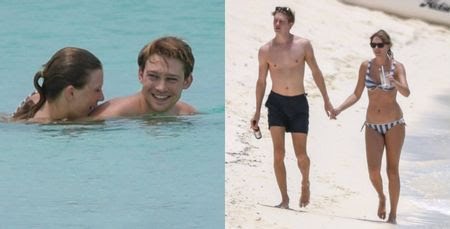 Next on our list are singer Taylor Swift and her boyfriend, actor Joe Alwyn. During their beach day, the two just couldn’t stop laughing and seeing them having so much fun together definitely makes us happy — and perhaps a tiny bit jealous!

9. Bella Thorne And Benjamin Mascolo Jumped In Together 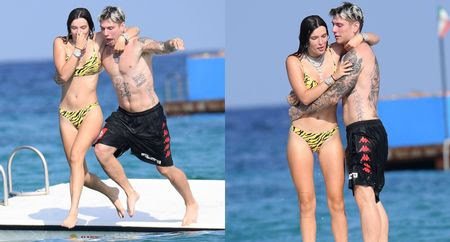 Former Disney Channel star Bella Thorne and her boyfriend, Italian musician Benjamin Mascolo, are pretty much regularly spotted hanging out at beaches in Italy, and in the pics above you can see them jumping into the water like true lovers — together! 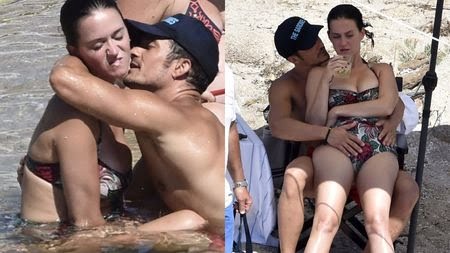 Let’s move on to Hollywood star Orlando Bloom and his fiancee, singer Katy Perry. Any time that the two are spotted at the beach you can bet that there’s going to be plenty of PDA shown — and the pics above certainly prove that!

7. And So Did Cameron Diaz And Benji Madden 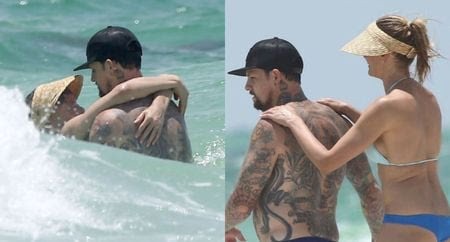 Another famous couple that made it onto our list is Hollywood star Cameron Diaz and her husband, musician Benji Madden. As you can tell, the two showed each other plenty of affection and Cameron even made sure to put SPF on Benji's back! 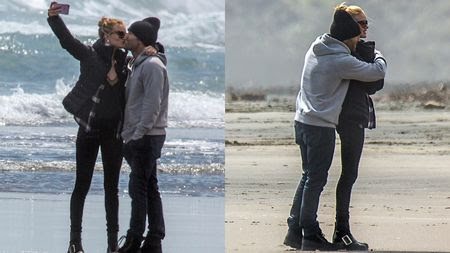 How adorable are these pics of Hollywood star Jason Statham and his partner, model Rosie Huntington-Whiteley walking along the beach and taking a loving selfie for the memory book? We also have to mention that we love a celeb couple who enjoys the beach on a colder day as well!

5. Will Smith And Jada Pinkett Smith Looked Into Each Other's Eyes 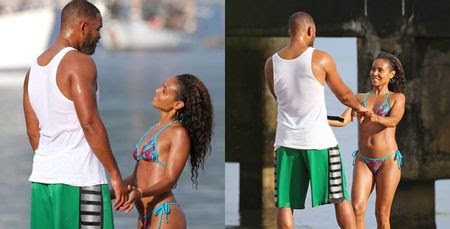 Obviously our list wouldn’t be complete without Hollywood stars Will Smith and Jada Pinkett-Smith who were spotted looking lovingly into each other's eyes at the beach — and if that doesn’t scream "having a moment" we don’t know what does!

4. And Beyoncé And Jay-Z Once Again Proved They Are On A Different Level 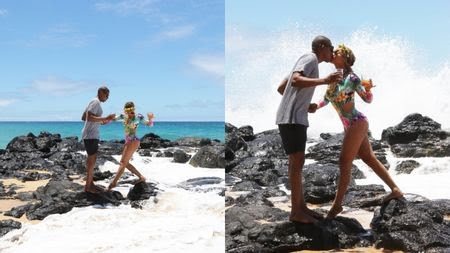 Next on our list is singer Beyoncé and her husband, rapper Jay-Z who once again proved that nobody does beach pics as they do. While in Hawaii the two took these adorable photos of themselves having a drink during a walk on the beach! 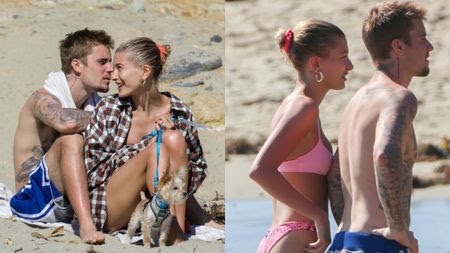 Let’s move on to singer Justin Bieber and his wife, model Hailey Baldwin. The two were spotted enjoying the warm weather together and you could definitely tell from the little glances they would give each other just how much in love they are! 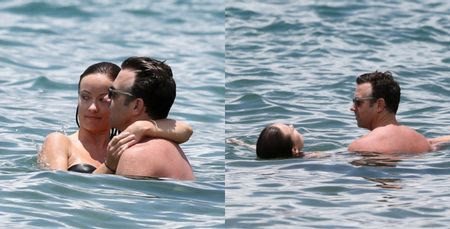 Another famous couple that made it onto our list are Hollywood stars Olivia Wilde and Jason Sudeikis. As you can tell from the pics above Olivia enjoyed floating in Jason's arms in the water — and our hearts are officially melting!

1. And Lastly, Lili Reinhart And Cole Sprouse Walked In Silence 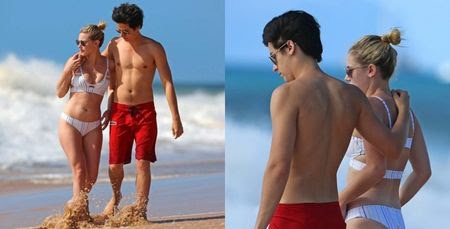 To wrap our list up we decided to go with Riverdale stars real Lili Reinhart and Cole Sprouse. The two actors were spotted walking along the beach in silence while enjoying the view and each other’s company, and honestly — that sounds like perfection!

Soul ties? You can cut ties with your ex boyfriend/girlfriend using this simple method