It Ended in Tears for the TV presenter 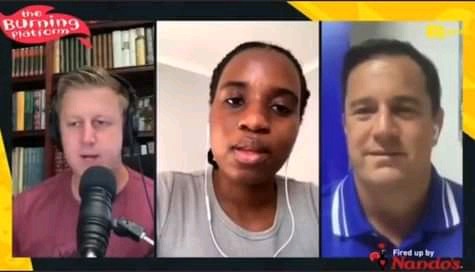 Johannesburg- It ended in tears for the controversial and racist media personality following his racist act during the broadcast of his show.

During an interview with DA leader John Steenhuisen and One South Africa Movement member Mudzuli Rakhivhane, Cliff discussed the furore over DA posters in Phoenix, Durban, which were removed following an outcry.

During the interview, Cliff claimed race was "at the bottom of the list" for many South Africans. 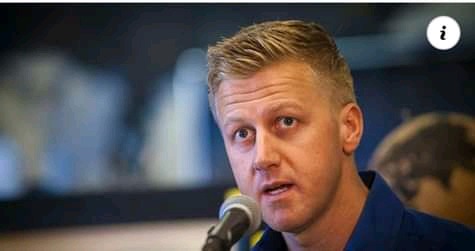 Rakhivhane then replied: "They obviously don't experience the type of racism I experience on a daily basis."

This was followed by a response from Cliff, saying her experience was "completely anecdotal" and "unimportant".

Cliff's response angered many people in South Africa as they felt like he is condoning racism. For the mere fact that he feels some racism is "unimportant", shows that he actually see no problem with racism.

How it ended in tears:

The main sponsor of his show, Nando's have announced that they will be terminating its sponsorship of The Burning Platform, following public outrage over comments made by host Garth Cliff.

The show is broadcast on Cliff Central and was sponsored by Nando's for five years.

The posters claimed the ruling party branded the historically Indian community racist, while the DA celebrated them as heroes during the July unrest. The posters, placed on top of each other, read: "The ANC called you racists" and "The DA calls you heroes."

Rakhivhane shared a clip of the interview on Twitter.

Cliff's comments triggered outrage, and criticism against the Nando's sponsorship of his show.

Shortly after the incident, Nando's tweeted it supported "the right to freedom of speech".

"We do not, and will never, invalidate anyone's experiences or condone racism in any form. We are taking this serious matter under review," the company said.

In a statement released on Saturday, Nando's announced it would be pulling the sponsorship with immediate effect.

It said it supported healthy debate and the right to freedom of speech.

"There are many instances in which Nando's has not agreed with the opinions of both guests and presenters on Cliff Central, but we have upheld their right to express those views as a core component of a healthy constitutional democracy.

"In the case of The Burning Platform episode aired on [Thursday], Nando's is of the view that Gareth Cliff failed to create an environment where free speech was possible by talking over Mudzuli Rakhivhane and dismissing her view whilst not allowing her to adequately express it."

The company called the incident "highly disappointing" and "at odds with the reasons that we originally entered into our sponsorship of The Burning Platform". 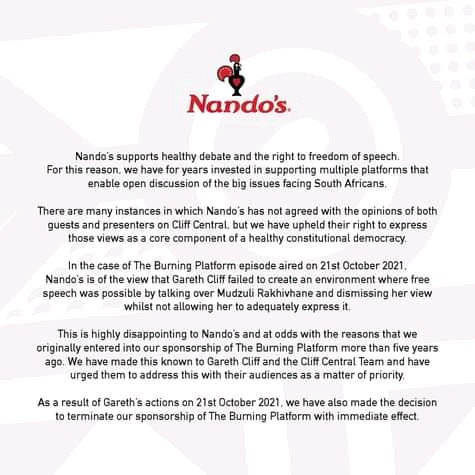 Prayer: Lord, Help Me To Recognize The True State Of My First Love And Also Help Me To Sustain It

Baroka FC Made A Classic Comeback, But A Late Penalty Handed Golden Arrows The Points

Shudufhadzho Musida make a fashion statement with her magnificence look in a stylish outfit.