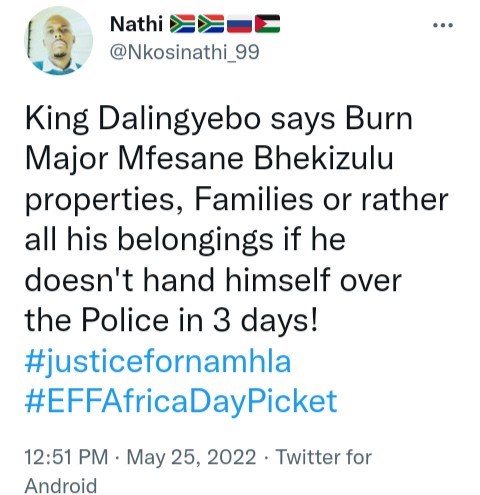 Major Bhakizulu, the alleged killer of Namhla Ntwa from Mthatha is believed to be still roaming the streets even after the calls of him to hand himself over has been making rounds.

It is been a month since Namhla was shot nine times outside her home and no one has been arrested for her death.

Namhla's sister revealed to the world all that happened in her sisters relationship with Major and how her late sister endured abuse in the hands of Major.

To give proof to the people, Namhla's sister posted all the screenshots where Major was always threatening to beat up Namhla and where he was always forbidding Namhla to visit her family.

The citizens of South Africa have been wondering how did Major even get bail with so much evidence against him.

King Dalindyebo has allegedly said something too about the death of Namhla and said, if Major doesn't hand himself over, his properties must be burnt along with his family.

Burning his family would make people no different than Major because they would be killing innocent people for crimes they did not commit.