Before asking Liziane Gutierrez if she wanted to be burnt in the outfit she wore to dinner, someone complimented her on how "beautiful" she looked at the meal.

The swimwear model Liziane Gutierrez first traveled to Ukraine with the intention of assisting in the resistance movement against Vladimir Putin's invasion of the country; nevertheless, she was forced to leave after receiving the most recent death threat from Russia.

After being followed to her hotel room by potential assailants, a bikini model who had traveled to Ukraine to assist in the resistance movement against Russia has been forced to flee for her life.

The writers of the message threatened to burn Ms. Gutierrez alive if she did not leave the country immediately and offered specifics about where she had been that night, who she had been with, and even what she was wearing. The note also included information about where Ms.

Ms. Gutierrez stated that the specifics of the latest communication are what frighten her the most, despite the fact that she was unmoved by the Russian death threat she received a month ago.

She explained that the issue with the letter was that the sender was aware of what she was wearing, where they were, and who she was with.

Ms. Gutierrez had in the past gotten death threats from Russians after sharing images of herself sitting on top of a wrecked tank. However, she stated that the threats this time sounded more precise and serious.

She had been going out on covert dates with the boxer, who was said to be a powerful Ukrainian, but it turned out that someone had been keeping an eye on the two of them.

"Because they had information in the letter, I started to panic, and then I started to flip out." I have no idea who authored it, but they were backed up by evidence."

The enigmatic letter stated that she had seemed "beautiful at dinner," named her companion, who was a former boxing champion, and specified the location of the restaurant where they had dined together.

The voice then demanded that she "get the f*** out" before threatening that they knew where her family lived and asking if she wanted to be burnt alive in the clothing that she was wearing.

Liziane, who has more than one million followers on Instagram, arrived in Ukraine for the first time in the middle of March to serve as a volunteer for an assistance organization.

She said that she had met the fighter, an influential Ukrainian, through a mutual acquaintance, and that their dates were always organized with the utmost caution. She also stated that the boxer had been her boyfriend at the time.

All interactions were conducted through a third party, no photographs were taken, and there were no updates made to any social media accounts.

She stated that "at each and every occasion, he was really, extremely discreet."

“I was going in one automobile, he was travelling in a separate one.

After allegedly receiving death threats, Ms. Gutierrez stated that she had fled the country and had gone into hiding.

She went to Ukraine in the middle of March to serve as a volunteer for an assistance organization there. "There were constantly eateries that had absolutely nobody," she said. Without a doubt, these were lovely locations.

"However, it seemed as though we were constantly seated in the rear of the restaurant." Due to the nature of who he is, he was almost never seen without a large number of bodyguards.

"And after that, he'd go in one automobile, and I'd go in the other car," the narrator says.

Ms. Gutierrez reported that on the evening of their last date at the Premier Palace Hotel, she saw two guys standing on the street outside her room and pointing up at her window.

The letter that would ultimately decide her life was delivered to her via the hotel reception the next morning.

According to Liziane, she did not waste any time in alerting the middleman who was responsible for setting up her appointments with the boxer, and as a result, somebody was dispatched to collect the letter.

But, she went on to say, she hadn't been in touch with her date since then. 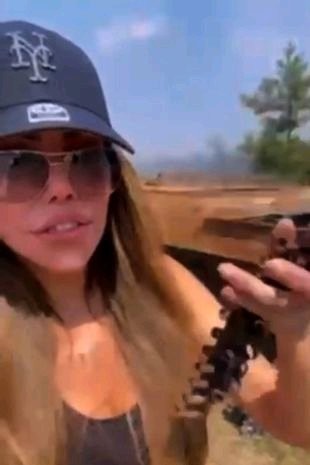 She volunteered there for the first time for a little over a month between the middle of March and the middle of April, and then she went back there in May.

She took the choice to depart after she had spent some time staying under the radar in her hotel room and then some more time concealing herself in Rivne, which is located around 300 kilometers west of the capital of Ukraine.

"I decided to extend my stay at the hotel for a couple of extra days. They urged me to keep a very low profile and to avoid posting anything on social media, she explained.

I spent a few days at Rivne with some of his buddies, and it was a lot of fun.

"I stayed with this family in their incredibly wonderful house, and not only were they nice people, but also the place was really nice.

"They told Liziane that it would be best for everyone concerned in this situation if she left Ukraine, at least for the time being. They mentioned this."

"I really didn't want to go, but I didn't know what else to do."

Ms. Gutierrez stated that she was still unsure as to who was responsible for sending the threat, but she added that she wished to go back to Ukraine.

She first volunteered there for a little over a month between the middle of March and the middle of April, and then she went back there in May to continue her service. 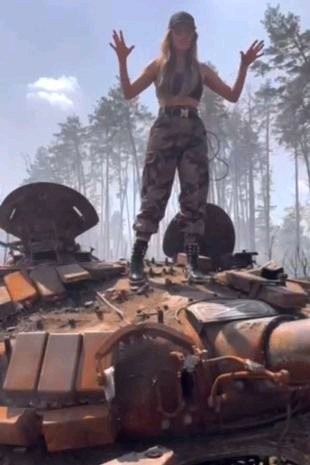 The previous time she was threatened with death was after she published photographs on Instagram of her standing atop a destroyed Russian tank close to Bucha.

According to reports, she was awarded something in the range of $70,000 (or 50,000 pounds) in compensation following the conclusion of her case against Chris Brown.

Woman gets shot during an argument about not wearing panties

AKA preaches about God to fans