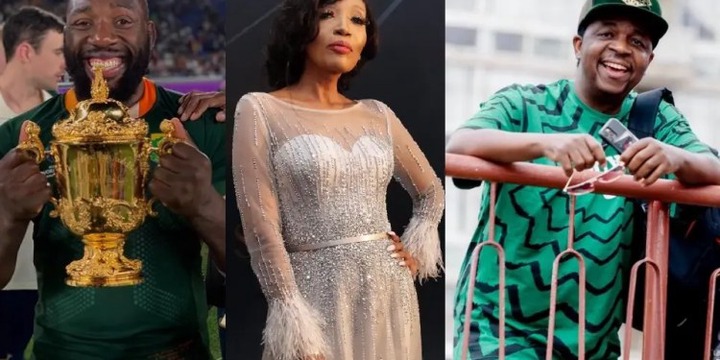 Themba Ndaba is most popular for his on-screen character on Mzansi Magic's theatrics series The Queen as Uncle Brutus. The carefully prepared entertainer did his essential in the mid 1970s before he enlisted at St Mark's High School back in Mbabane, Swaziland.

Tendai 'Monster' Mtawarira will go down in the set of experiences books as one of the most incredible with regards to rugby. He has been one of the gem Mzansi brags around with. Be that as it may, in the blend of things, maybe he was brought up in Zimbabwe prior to changing his citizenship to South Africa.

He was conceived on1 August 1985, in Harare, Zimbabwe. Monster proceeded to learn at Churchill School before he was offered an extraordinary grant with Peterhouse Boys High School in view of his unrivaled rugby abilities.

After his stretch with Sharks, Home Affairs Minister Nkosazana Dlamini Zuma offered him South African citizenship. However, he went down in the set of experiences books as the most covered prop in South African history and the third most-covered Springbok ever behind Victor Matfield and Bryan Habana.

It's of interest that the observed DJ and Kalawa Jazmee Records troublemaker grew up and had his schooling in the second biggest city of Zimbabwe, Bulawayo. His dad was an observed Zimbabwean government official Esaph Mdlongwa, and then again, his mom was South African Emily Sophia Molifi.

Notwithstanding being brought into the world in Brits, South Africa, Oskido experienced childhood in Zimbabwe just to get back to South Africa after High school.