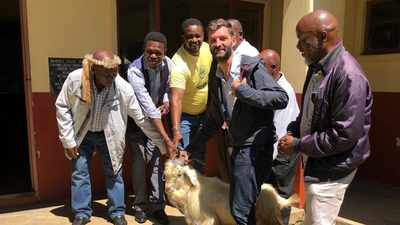 The Bergville leadership hopes that the local youth will be left with the skills as an overseas actor arrives in KwaZulu-Natal. Tom Cruise is in the country to make a film.

Tom Cruise has been seen in South Africa for some time, having previously appeared in Hoedspruit, Limpopo.

This week, pictures emerged in Ladysmith, as he was spotted in the Drakensberg Mountains, in Bergville.

The Bergville Prince of the Ngwane tribe, Menzi Hlongwane, has expressed his delight at this.

Its spokesman Sthunywa Zwane said Tom Cruise's team arrived at the national court and prayed to the king for a white goat.

“Ndabezitha wamaNgwane is happy with this, and has opened their hands to start the work of this film. There are more than 40 people picking part-time jobs, and they are still finding others. This is exciting and we want to keep the skills that people can use going forward, ”said Zwane.

Sipho Ndaba, who is on the king's development committee and is also the organizer of the Drankesberg Extravaganza event, said the event would enhance the community.

“We thank the KwaZulu-Natal government and the Okhahlamba municipality for supporting programs such as Extravaganza because it helps to highlight the area and attract investors and other filmmakers. We have built relationships with the Tom Cruise team so that even after their departure we can work together at our conferences to share information and improve each other, ”said Sipho.

According to reports, Tom Cruise is filming the film Mission Impossible.

4 Benefits Of Bath Salts And How To Use Them

Chakalaka Norris is at Durban July looking this beautiful

4 Famous People Who Allegedly Predicted Their Own Death, Read Their Words