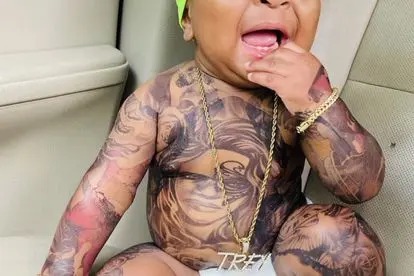 A mother, Shameka Morrison is proud for doing tattoos for her child but people think otherwise. People are not happy with the fact that she put tattoos to a child whose nor even allowed. The lady said that she has been bullied and Criticized since when she was 8 months pregnant. She says that she was criticized when had her baby shower. People did not liked the idea that she had a baby shower at a tattoo baba shop of her brother. The lady said that even when she has given birth people still Criticized her saying that she is a bad mother.

This is new, people are shocked to see the child. It's not suprising that people can Criticized the 29-year-old lady, Shameka Morrison. No parents have ever done what the lady just did. People have been thinking about the pain the child could have felt while doing the tattoos.

The lady give many people headache. Many people did not know that these tattoos are not original tattoos. According to the source this tattoos can be removed in few days. This is permanent tattoos, it's a temporary tattoos that can very removed in few days of washing. This tattoos are not real, it's a fake tattoos. Those who still remember back then we used to buy them in a chewing gum, we paste them in our bodies or fridges at home.

PICTURES : Last photographs taken by iconic celebrities before they lost their lives. (RIP)