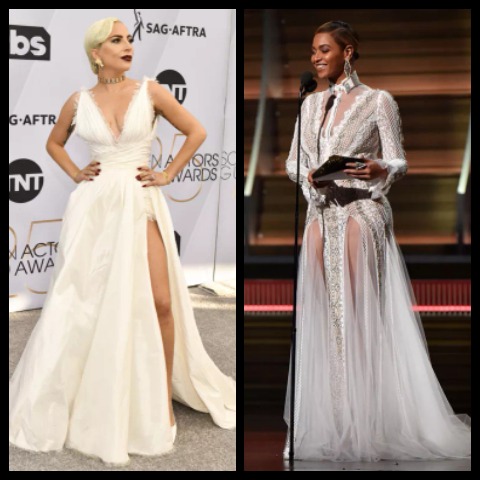 Aside from saying "I do" to your soulmate, one of the most exciting aspects of getting married has to be selecting the stunning gown (or suit, if you prefer) you'll wear on your special day. But who says you have to reserve that distinction for your wedding day? Bridal gowns were fair game for females like Camila Morrone and Emily Ratajkowski when it came time to dazzle on the red carpet this awards season.

They were far from the first to wear bridal couture for a big occasion, despite their unorthodox gown choices. Everyone from Beyoncé to Kate Hudson to Sarah Jessica Parker has had a princess moment (some more than once!) in a real-life wedding gown. They didn't have any intention to tie the knot. 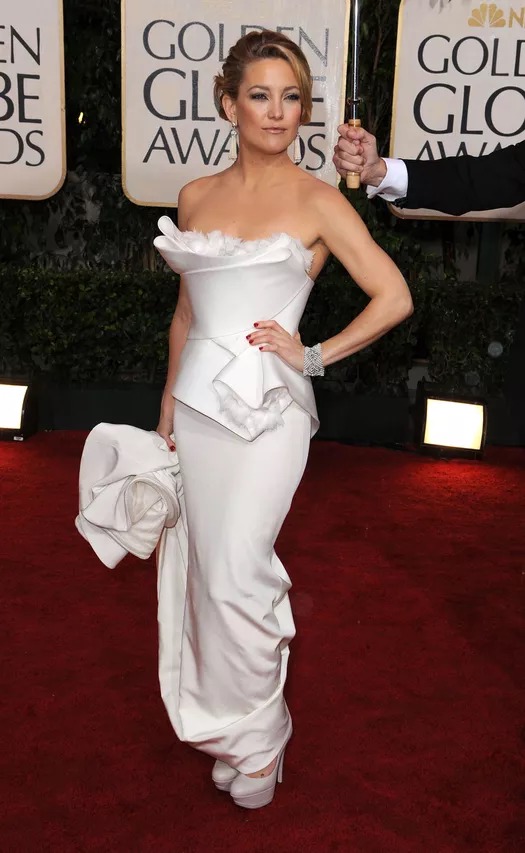 Hudson attended the 2010 Golden Globes in a jaw-dropping design from Marchesa's spring 2010 bridal line, maybe drawing a hint from her role as Olivia "Liv" Lerner in 2009's Bride Wars. Hudson, who wore a structured column gown with a ruffled neckline and a gathered mermaid skirt, drew a lot of attention. 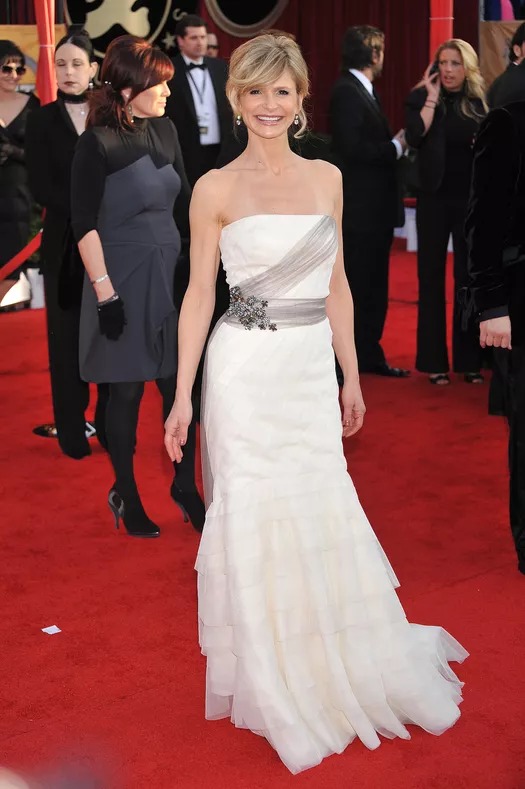 Kyra Sedgwick may not have won the Screen Actors Guild Award for Outstanding Performance by a Female Actor for her role in The Closer in 2010, but she did win big on the red carpet: Vera Wang, the bridal maestro, designed the actress's wedding gown! It's all about it. 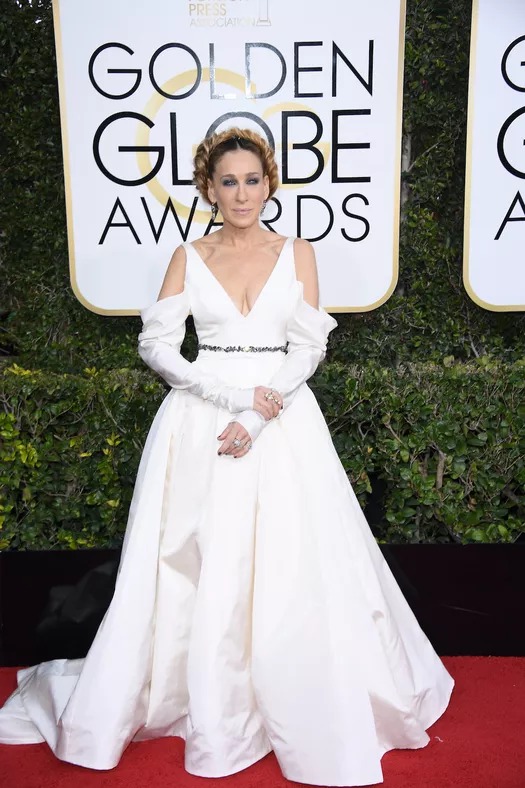 We got a *pretty* good idea of what Sarah Jessica Parker might have looked like had she worn white on her wedding day to Matthew Broderick after seeing her in Vivienne Westwood’s cloud dress for Sex and the City (the actress famously wore a ruffled, all-black Morgane Le Fey frock while exchanging vows with her hubby of 22 years). Still, she gave us all a good reminder in 2013, when she walked the red carpet at the Golden Globes in Vera Wang bridal couture. “I saw a picture of this dress and was completely haunted… fell madly in love with it,” she reportedly said of the plunging V-neck piece, which featured cold shoulder cutouts and a draped silk skirt 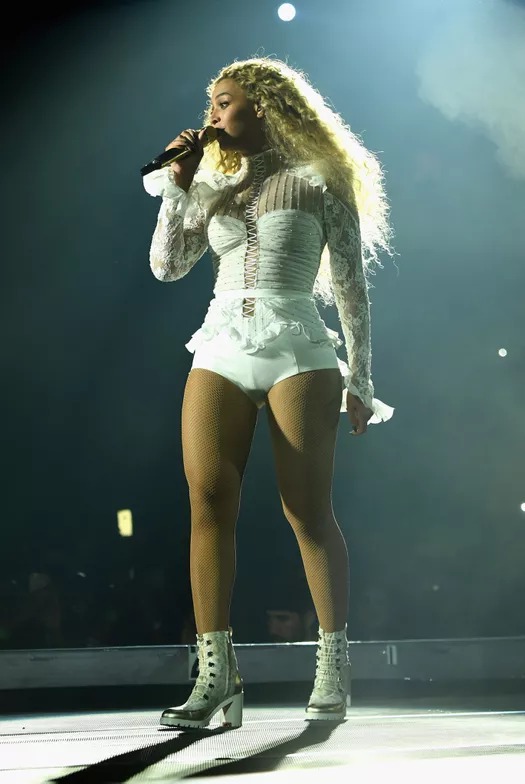 Queen Bee, it turns out, is a repeat offender when it comes to bridal gowns. Beyoncé's name appears on this list several times, beginning with this custom Inbal Dror lace bodysuit she wore for her On the Run tour in 2014. 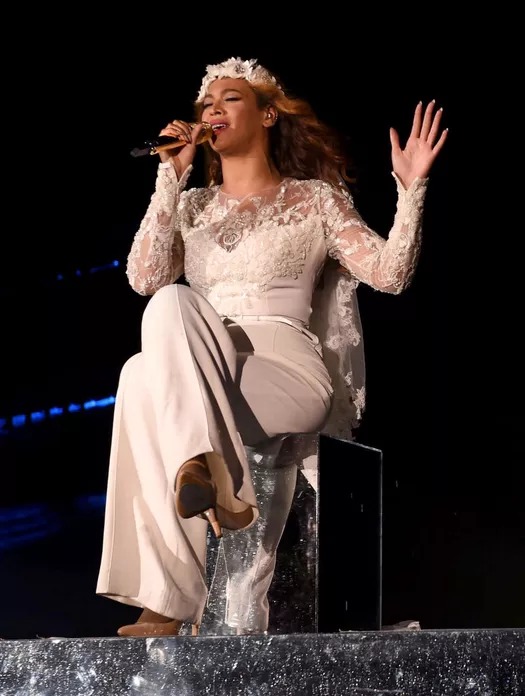 Bey mixed things up with a jumpsuit from Elie Saab's bridal collection for a second bridal-inspired look for the trip. Mrs. Carter was inspired to go bridal again after seeing this ensemble, which included all-over lace illusion sleeves and cape, as well as a flower crown and veil. 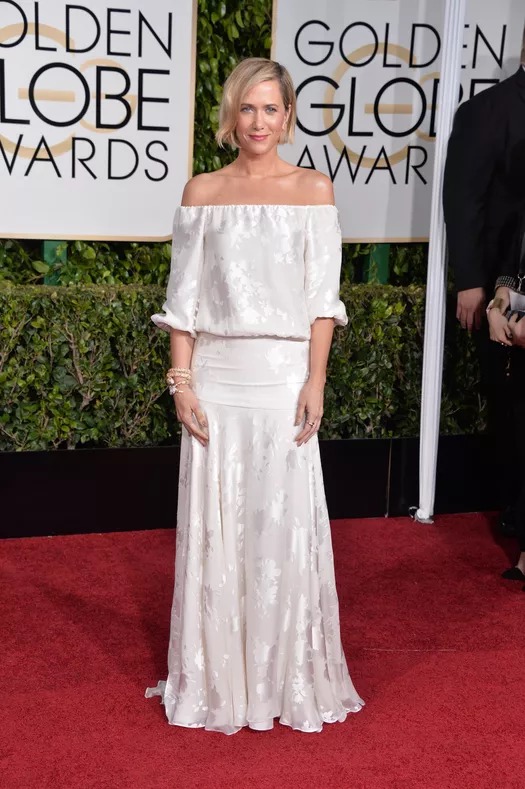 There was nary a wedding chapel or a groom in sight on Kristen Wiig’s arm at the 2015 Golden Globes, but that didn’t stop the comedian from making tongues wag in an off-the-shoulder ensemble that was fit for a blushing bride. The dress, named Amédée, came straight from Delphine Manivet's bridal collection and boasted a satin chiffon fabric and a loose, flowy fit that would be right in line with a beachside ceremony. 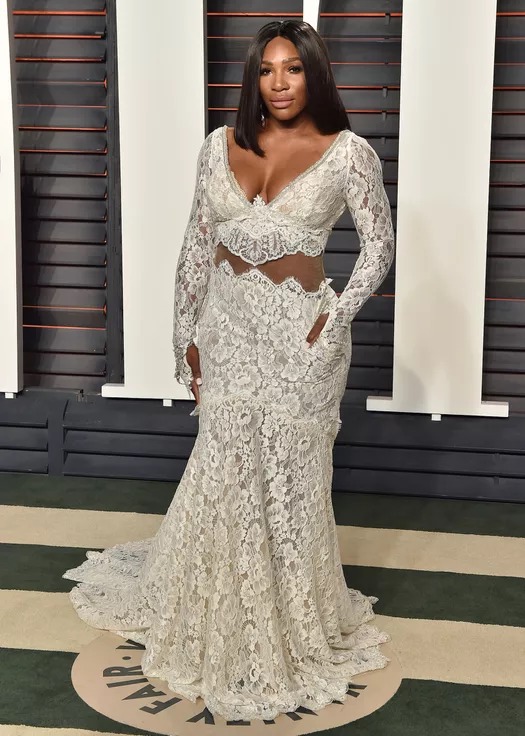 Leave it to tennis champion Serena Williams to shut things down at the 2016 Vanity Fair Oscars party with a wedding gown for the ages. Custom made for her build by Galia Lahiv, this lacy creation with sheer side cutouts and a deep V-neck had a totally different feel than the caped, princess-style Sarah Burton for Alexander McQueen frock she would ultimately walk down the aisle to marry husband Alexis Ohanian in one year later. 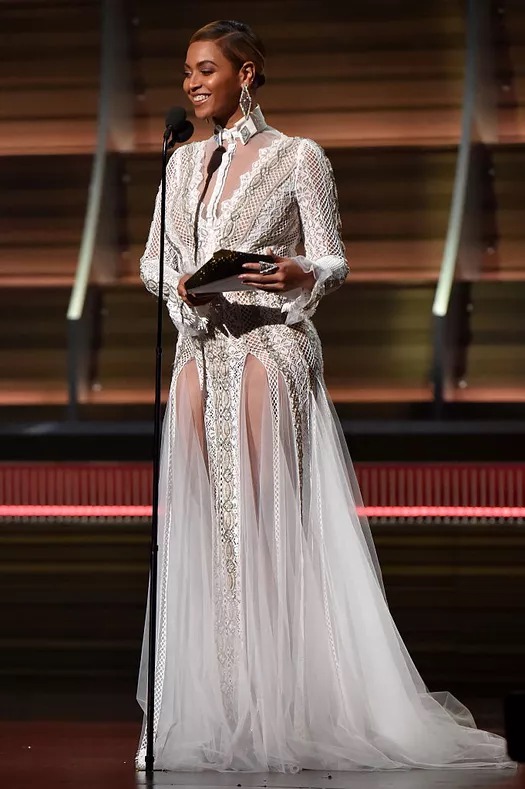 In a stunning Inbal Dror gown, Beyoncé nailed all of our favorite wedding dress styles for her next role as bride. At the 2016 Grammy Awards, high slits, an embroidered statement collar, and poet sleeves made a statement. 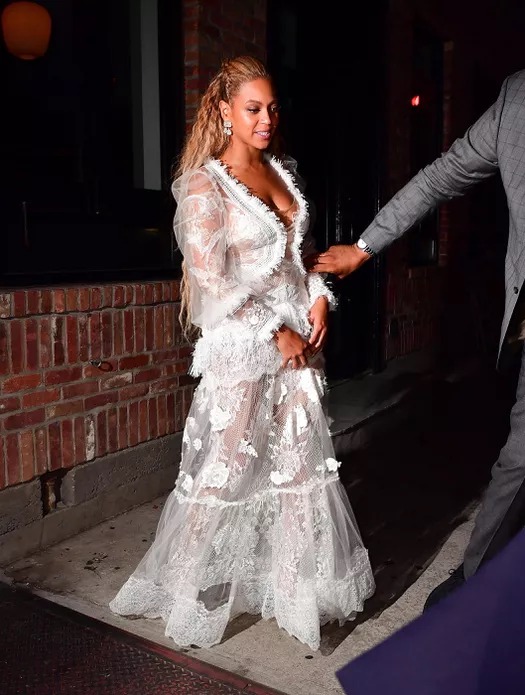 And now she's back! Beyoncé wore another another wedding gown to the 2016 Video Music Awards, this time a lovely floral-appliquéd, puffy-sleeved, sheer Yolan Cris design. 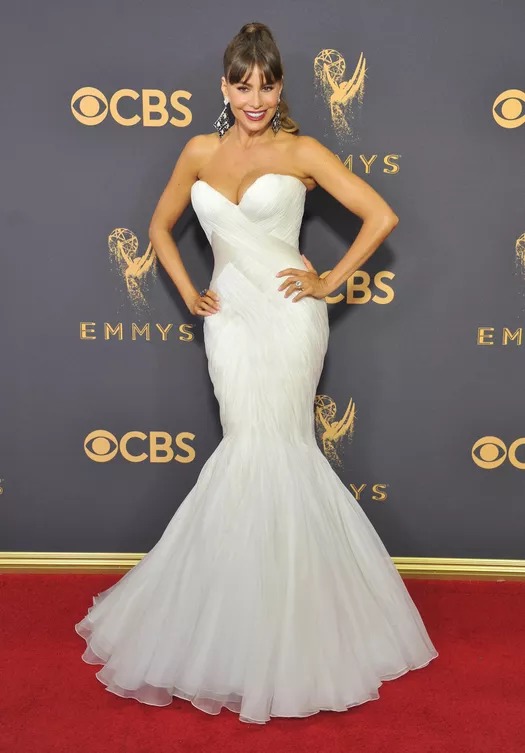 American designer Mark Zunino—the same man behind Vergara's own pre-wedding celebration cocktail dress—was responsible for the breathtakingly beautiful bridal getup the Modern Family actress chose for her stint on the 2017 Emmys carpet. Not only did the strapless mermaid frock make her standout from the crowd, it flattered her figure to a tee. “He makes dresses that are perfect for voluptuous women,” she later told E! News. 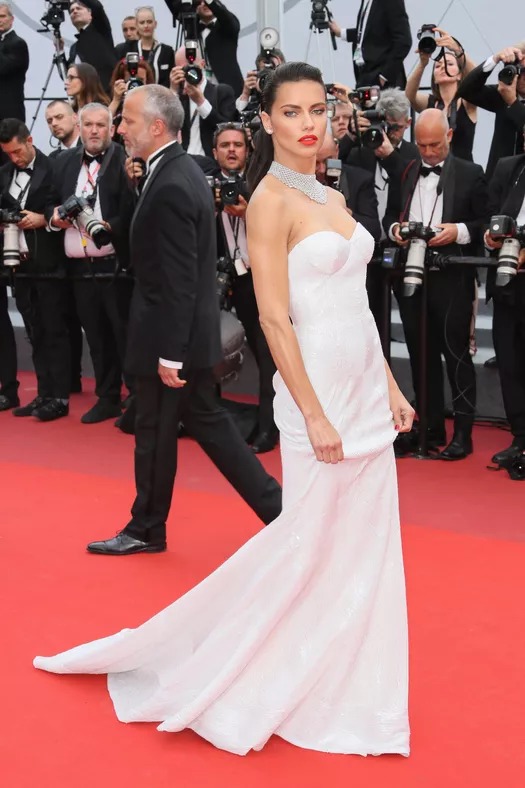 Adriana Lima looked like an angel in an all-white strapless Naeem Khan bridal gown she debuted at the premiere of Loveless at the 2017 Cannes Film Festival. The former Victoria's Secret model wore her hair slicked back, a strong red lip, and a plethora of jewels to complete her look. 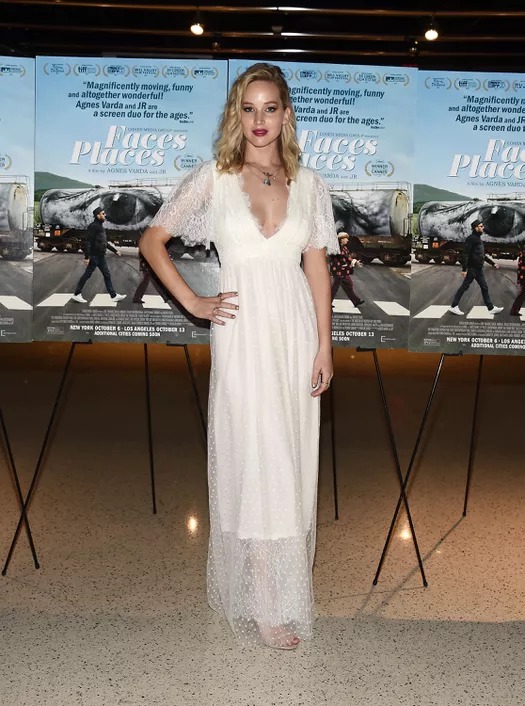 12.Jennifer Lawrence attends the premiere of Faces Places in 2017.

Jennifer Lawrence was putting on bridal gowns for size at the 2017 premiere of the Faces Places documentary in Los Angeles, long before she was choosing items for her wedding registry on Amazon. This L.K. Bennett dress features a beautiful lacy hem and butterfly sleeves, a low-cut neckline, and an empire waist. 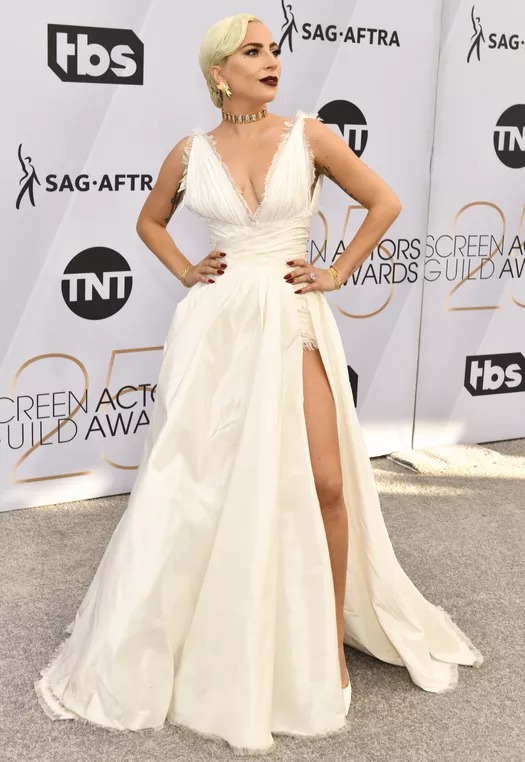 Mother Monster was a vision in white at the 2019 SAG Awards, which she turned up to in an actual wedding dress from Dior’s Paris Haute Couture show. With its frayed trim, plunging neckline, wrap waist, and thigh-high slit, the look brought plenty of drama, which Gaga smartly played up with a chic chignon and a dark burgundy lip and nails. 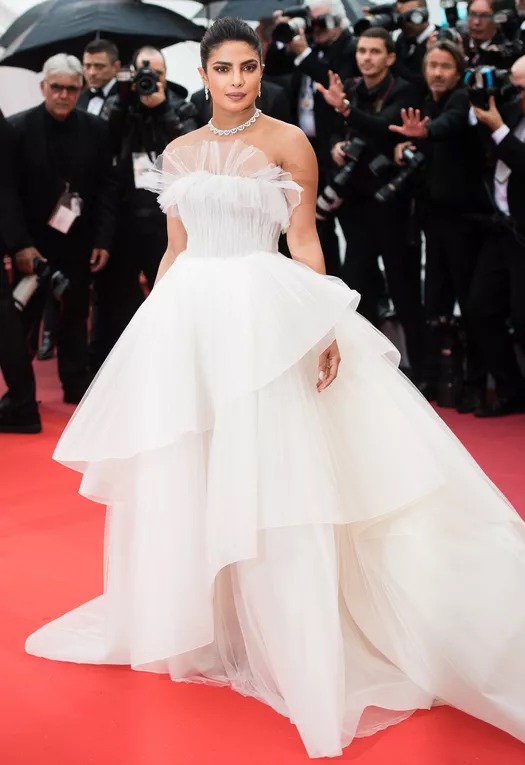 Never mind the fact that Chopra had not one, not two, but three different wedding gowns at her December 2018 wedding to now-husband Nick Jonas. The Quantico alum wasn’t yet finished with bridal couture in May 2019, when she showed up to the Cannes Film Festival in a show-stopping creation designed for the aisle by Georges Hobeika. Pulled straight from his spring 2020 line, the tiered garment had a ruffled, strapless neckline and a small tulle train that left us swooning.