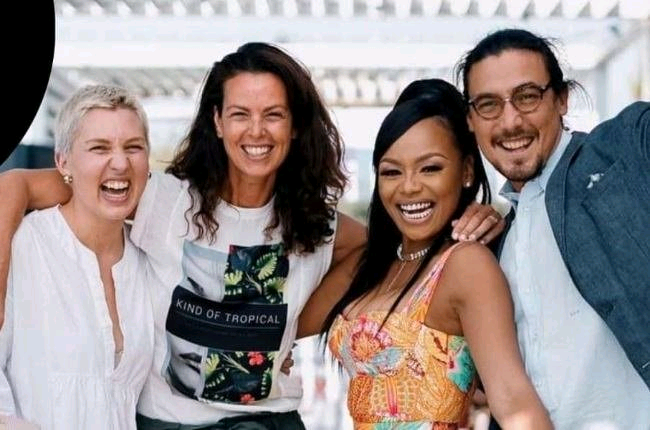 She first joined the group of people who criticized Nathi Mthethwa, South Africa's Minister of Sports, Arts, and Culture, for agreeing to spend R22 million on a big South African flag.

"Please fire this guy!" she wrote on social media.

"You don't know what you're doing at all. Go away! We all hate you because you're useless."

The flag idea is being looked at again by the government.

Now Bonang is going right after the company that used to manage her.

The MC and host recently took to social media to fire more shots at CSA owner Davin Phillips, saying that she won't give up on what took her 15 years to build. 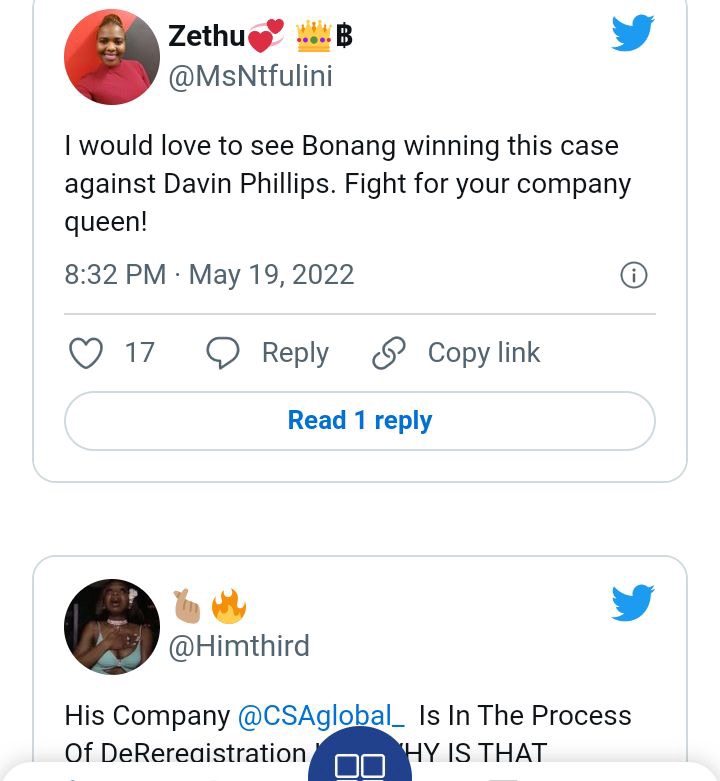 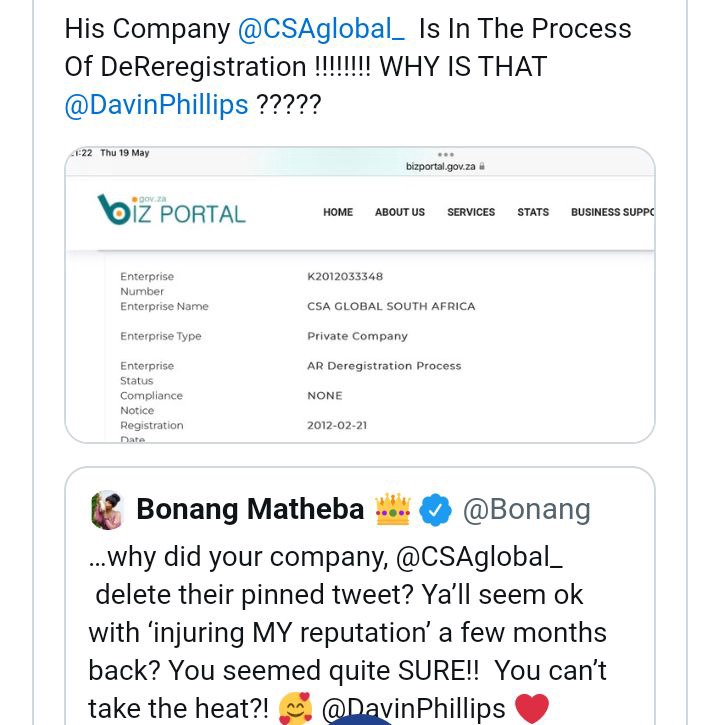 She wrote, "One thing I will do is stand up for myself in public."

"Enough is enough! The last two years have been hell for me and my family because of you, and it's clear that being nice behind closed doors isn't a language you understand anymore. I'm going to go to war! She said, "Watch me!"

"I've worked hard for 15 years! You think you can sneak up on me and steal? It's going to be cold in hell, my dear!"

She had doubts about CSA's honesty as managers.

"You (a manager) stole my talent, but you want me to apologize? Please explain it to me. Why did the pinned tweet for your company, CSA, get deleted? You guys don't seem to mind that you "harmed my reputation" a few months ago? You seemed quite sure. You can't handle the heat?!" she wrote.

"And now you're trying to steal my business, but it doesn't look like you're succeeding. A bad attempt to steal! You're audacious. how dare you?! Jay Badza and Sylvester Chauke helped set up and finish House of BNG long before you got there. But you think you can be sneaky and try to rob a bank! You're funny, Davin Phillips!"

"It broke my heart to see my father, Dr. Zweli Mkhize, and my brother, Dedani, fighting with each other." – Shauwn trying to make peace?

Bonang says that she is standing up for herself.

"You steal from creative black people! I'm not the first to do this! All it takes is a quick Google search. It's over now!"

Bonang broke up with her management company, Celebrity Services Africa (CSA), last year after she accused them of "unsavory behavior" and "the possibility of criminal conduct by the company and its representatives."

CSA released a statement on Twitter in response to the accusations made against them. The statement said that Bonang is "currently in breach of multiple contracts with various clients as she has been negligent to these brands and her own for the past six months."

They said that the "shocking claims" were not true.

But Bonang is not backing down.

She said in a recent interview with Drum that BNG is hers.

"BNG was and still is the center of a huge legal battle that is still going on. Since the case is still in court, I can't say too much. But BNG is doing well and is here. It's my business, my heart and soul, and we're about to launch something big. At some point, I will tell exactly what happened to me, and people need to learn from it. It's a mistake that anyone can make, and because we trust people, we get into hard situations because of it," she says.

Since then, Davin has given Drum a statement in which he says that Bonang's social media rants hurt her own reputation.

"Ms. Matheba's rants and raves are very sad and hurt her reputation and sense of self-worth. They are also another way that Ms. Matheba tries to twist and change the truth. To be clear, Ms. Matheba joined CSA in 2017 and the House of BNG opened in 2019," he says.

"Ms. Matheba has broken a number of contracts with different clients. The case is now with our lawyers, and an arbitrator will decide what to do about her contract violations. As we've already said, Ms. Matheba is the only person who has made millions of Rands off of The House of BNG, while CSA is still in the red after spending millions of Rands trying to make it a success.

He also says that CSA has invested in this business, but that they "have been very important in developing and creating the brand, from the actual naming convention to the route to market, packaging, innovation (MCC, Prestige, and coming up with the idea of BNG Nectar, the sparkling wine in a can), the distribution strategy (we got listings in key retailers), creating the brand identity, and getting all event partnerships."

Bonang said that Davin stole $52,000 (R820,000) from iHeart Radio and ruined her career in the US before it even started in a post that has since been deleted.

Should I tell them that you stole $52,000 from iHeart Media, which cost me my radio show and my job? Bonang added.

In his statement, Davin says that the claims are not true.

"Once again, this claim is not true. iHeart Radio has never claimed anything like this. iHeart ended the deal because Ms. Matheba didn't do what she was supposed to do, which was against the terms of the deal. We look forward to our days in the arbitration when these false allegations will be exposed." 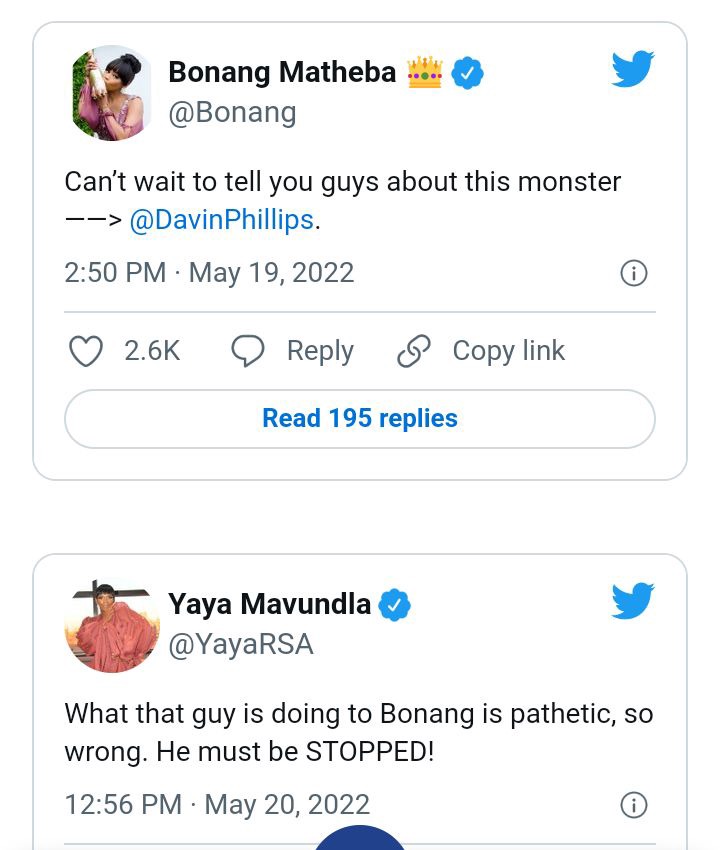 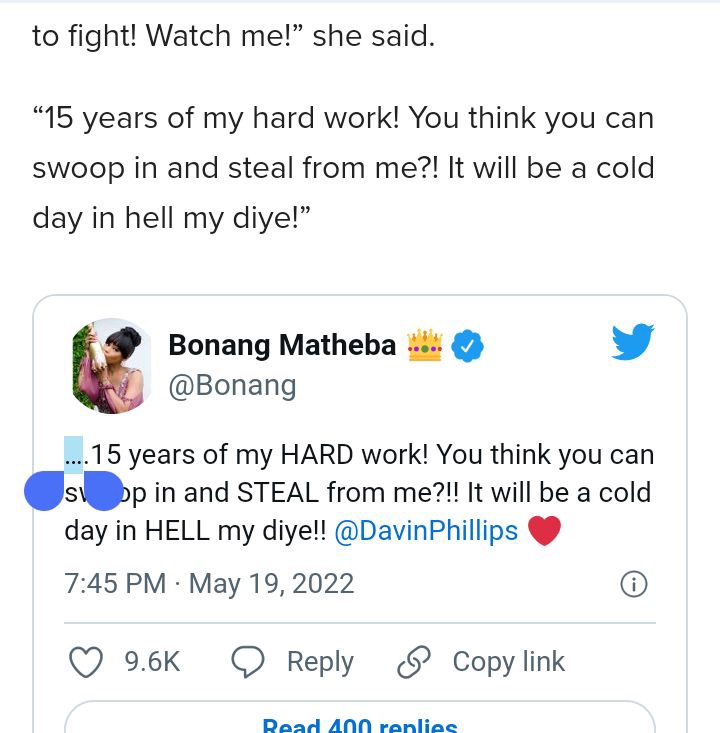 Social media responded in outrage, and many were behind the self-titled queen B.

Chelsea have parted ways with their technical advisor, See who it is

Tears flow as man dies after donating kidney to his mum