By Nozizwe_Wilson (self meida writer) | 25 days 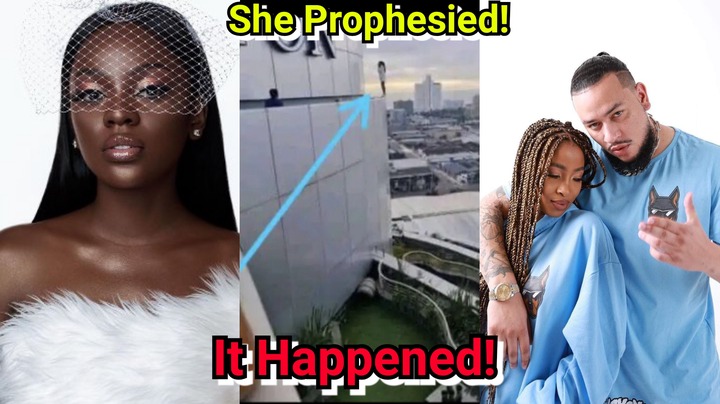 Millions are still groaning from the heartbreaking news of one of South Africa's finest rapper's loss of a loved one, who was also cherished by the public.

Tragedy struck in not more than 48 hours after the news broke that Rapper, AKA has lost someone very dear to his heart, his fiancé whom he planned on marrying sometime this year.

It was reported that Nellie Tembe, had killed herself after she jumped off the 10th floor of their hotel apartment in Cape town, where AKA had left her as he went to perform at a show. 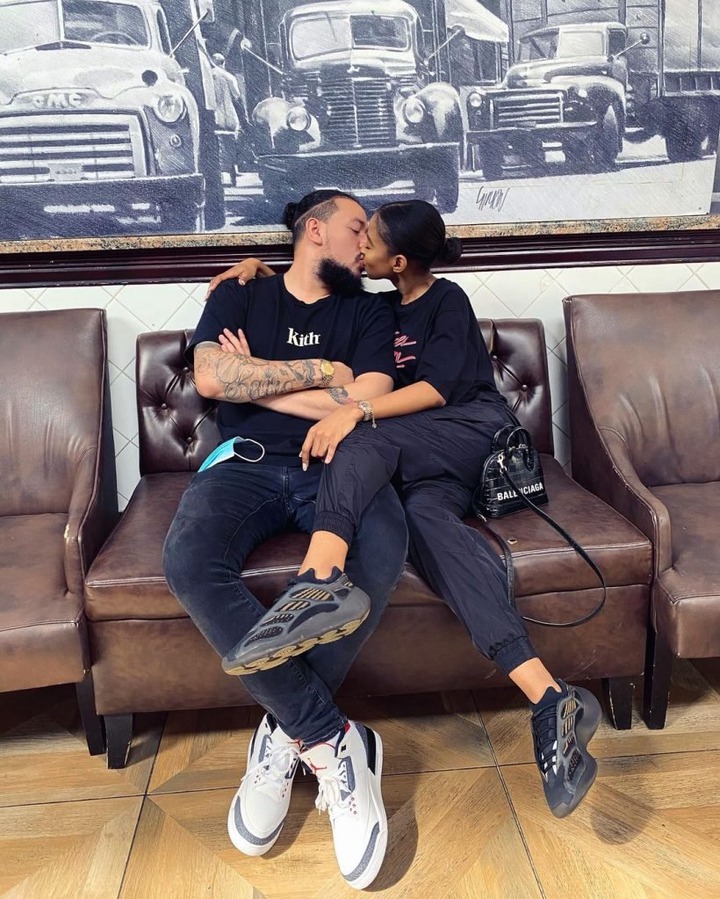 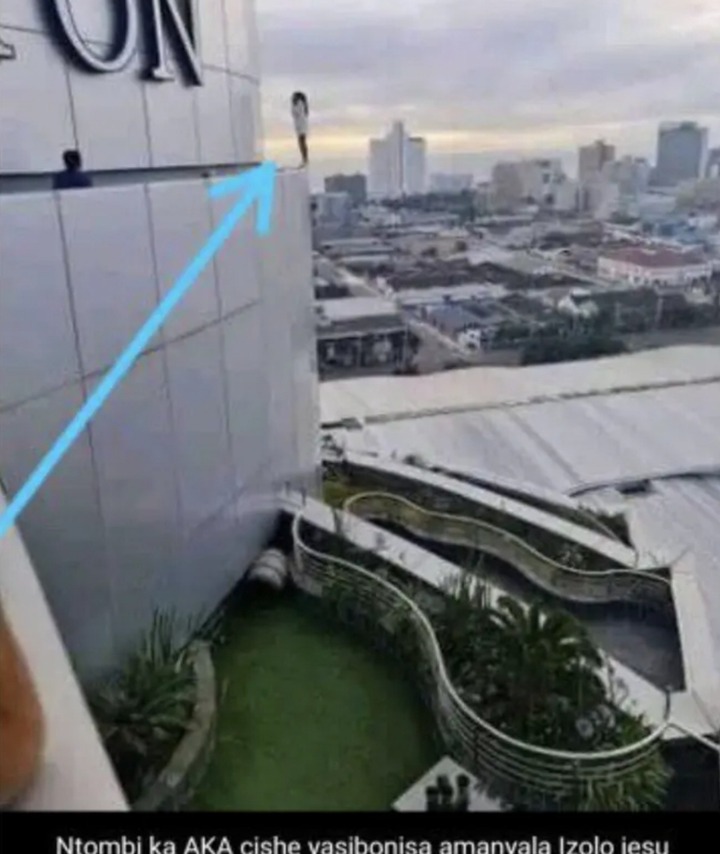 Furthermore, rumour has it that Nellie committed suicide after AKA left her in the hotel in Cape Town whilst he went out with another lady.

according to the rumours, AKA apparently went to perform at ayepyep and left NELLIE alone in the hotel room but he went with some girl after his performance and Nellie found out about it.

More news even broke further after inside information and investigation revealed that AKA didn't just loose one person but two.

there were reports that the 22-year-old was actuallypregnant for him. If it happens that she was pregnant, then this means that AKA also lost his unborn baby, which is a double blow for the rapper. 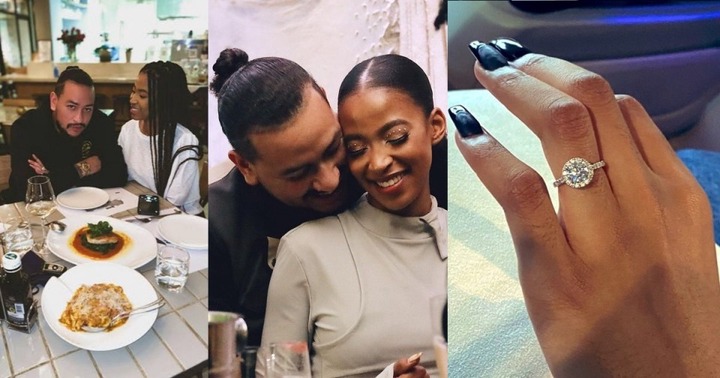 Moreso, during their journey of their relationship, a lady has been spotted multiple times preaching to People and most especially the couple about impending danger. But as expected she was ignored as some dumb person.

Known simply as Preshie Zo, she is a young lady who's twitter page has been decdicatedcfor the Lord's work of saving souls.

She is a twitter lady who uses her platform to preach the gospel of Christ o the public, mostly giving warnings about impending dangers, they mostly seemsl like revelations and the likes. 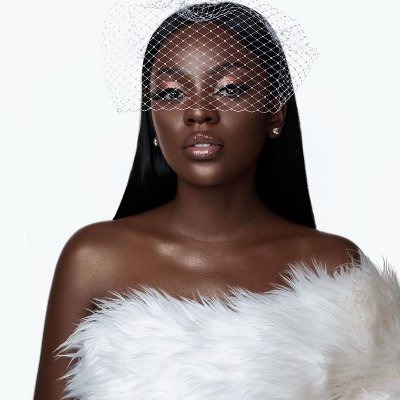 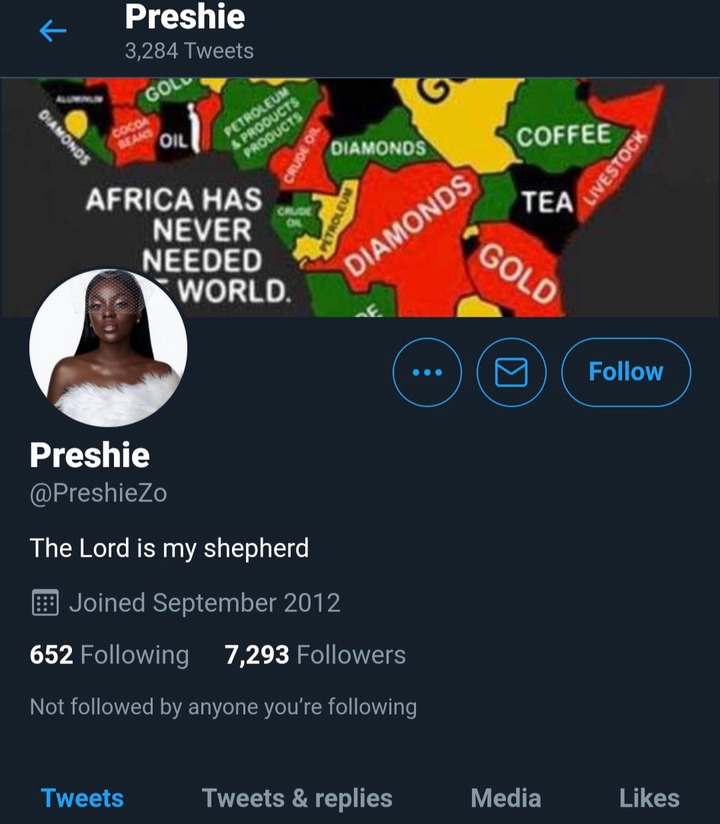 Just hours after the news went viral that Nellie, AKA's Fiancé had jumped off 10th floor of a hotel building to her death in Cape town, Preshie hinted that she had long warned about the impending danger.

"Nelli Tembe Was Killed because of certain duties that needed to be completed In the dark kingdom. AKA is aware of killed Nelli.

She's now a demon, she will not be able to enter the kingdom of God. She's about to wait in Hades for judgment day"

"I'm passing to say this relationship is demonic, it will not last as both of them serve in the same demonic world. 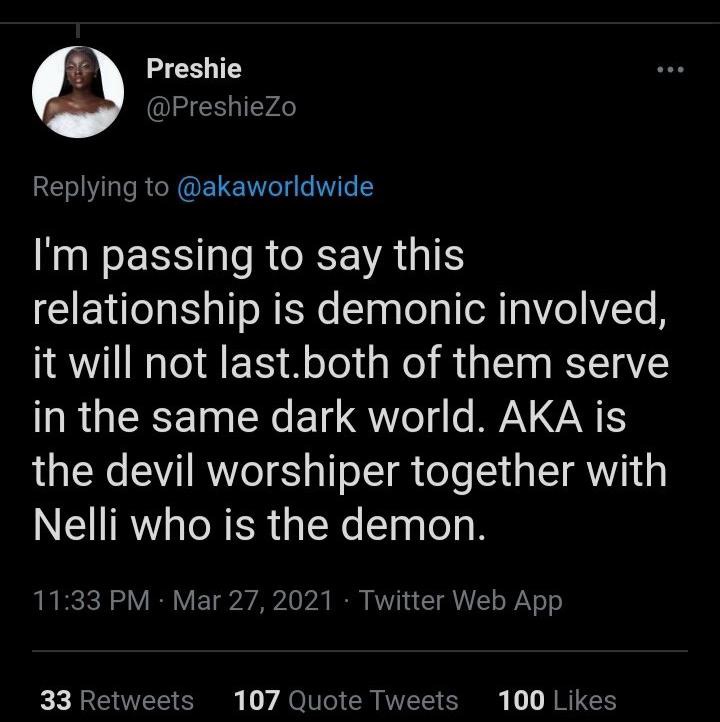 In the series of pictures, on the 29th of Dec, 2020, AKA said "before you talk about my girlfriend, please show me your PS5"

Then Preshie Replied "I'll comment when necessary, but Nellie is the next history in the making"

Another tweet had in it Preshie warning another God lover who was celebrating the engagement of Preshie To AKA that "what makes you type such verses when you know satanism is involved". 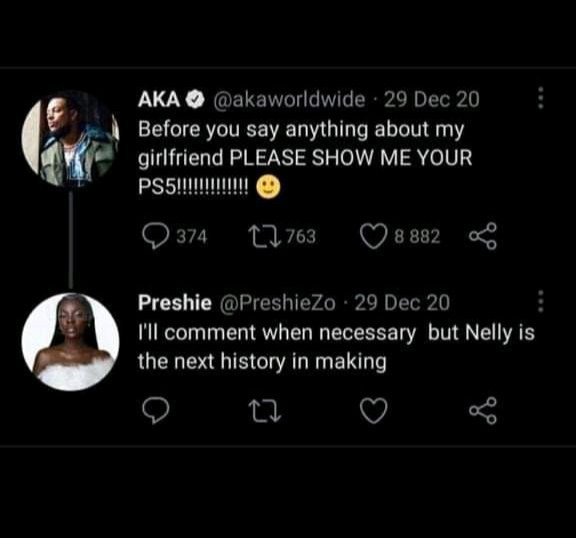 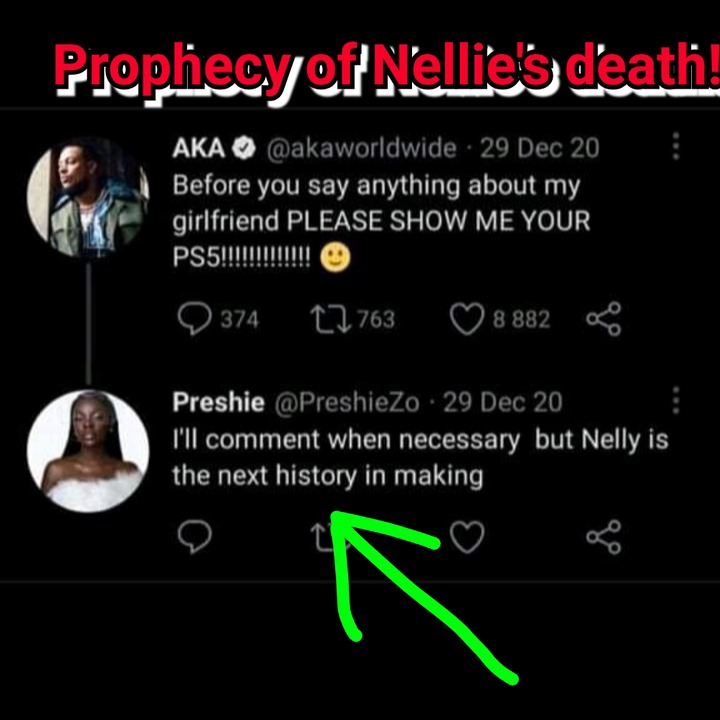 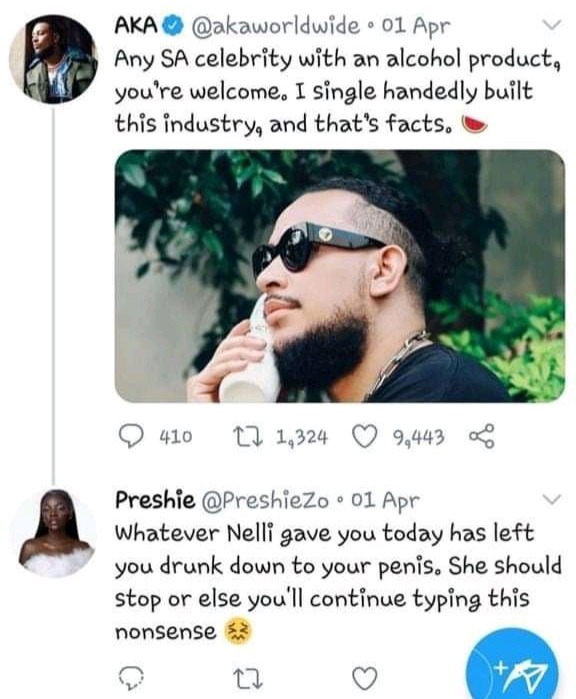 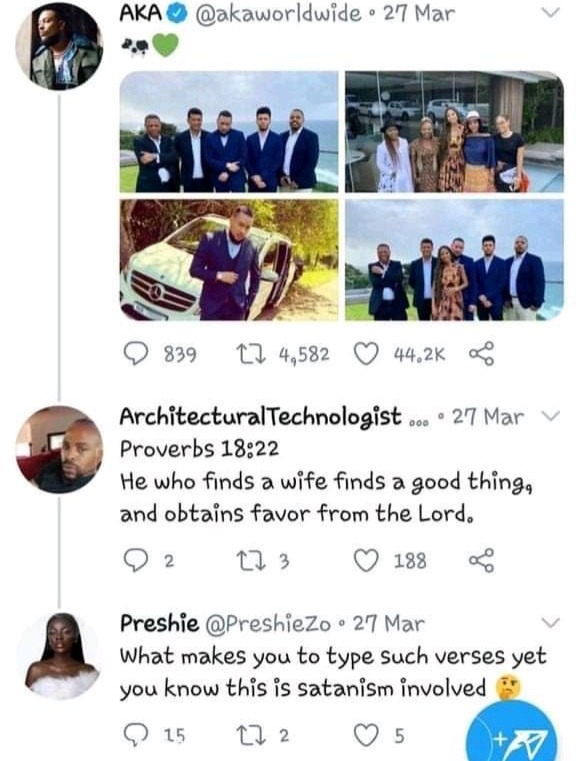 Since the revelation that Preshie made, indicating that there was a demonic Agenda behind their relationship and that she was sacrificed. Many have come to say that she might have a point and that she could be in danger if any of what she's been saying we're to be true.

"This PreshieZo girl need to be protected. Should any if this be true then she'll be killed just before we know it."

"What if Preshie shes a bitter ex gf trying to bring AKA down ?"

"Clearly this person knows something or heard something we don't know"

"girl need to be protected. Should any if this be true then she'll be killed just before we know it". 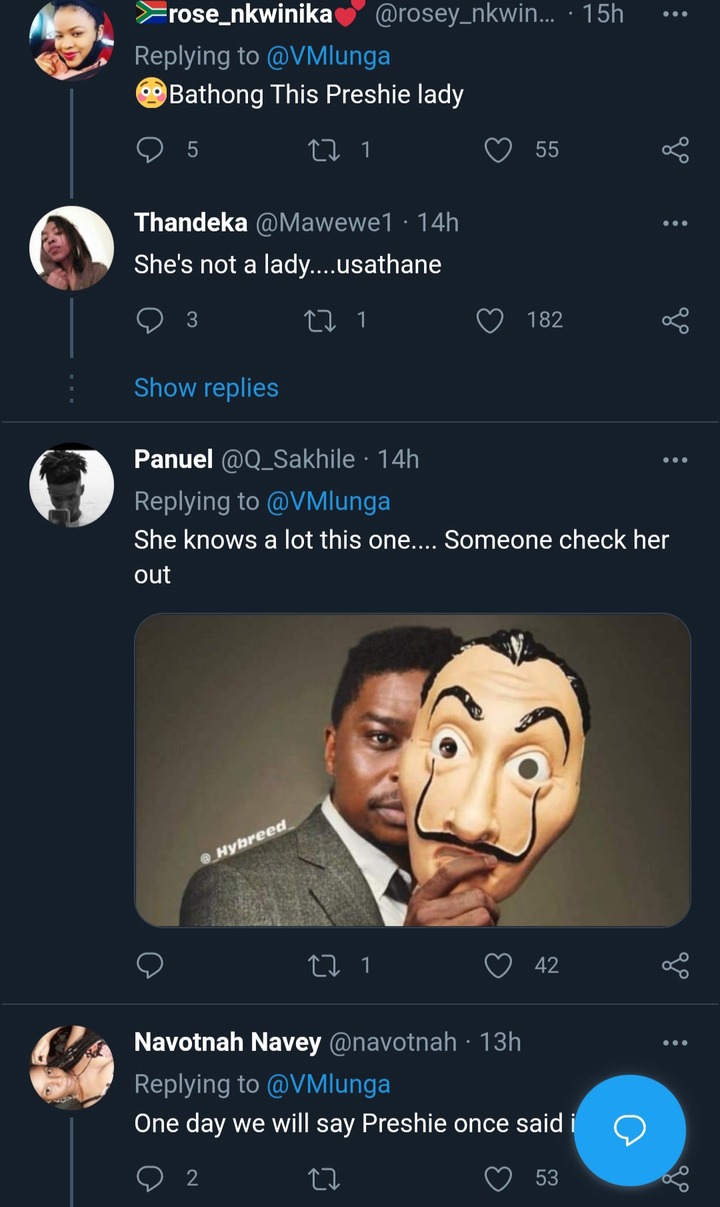 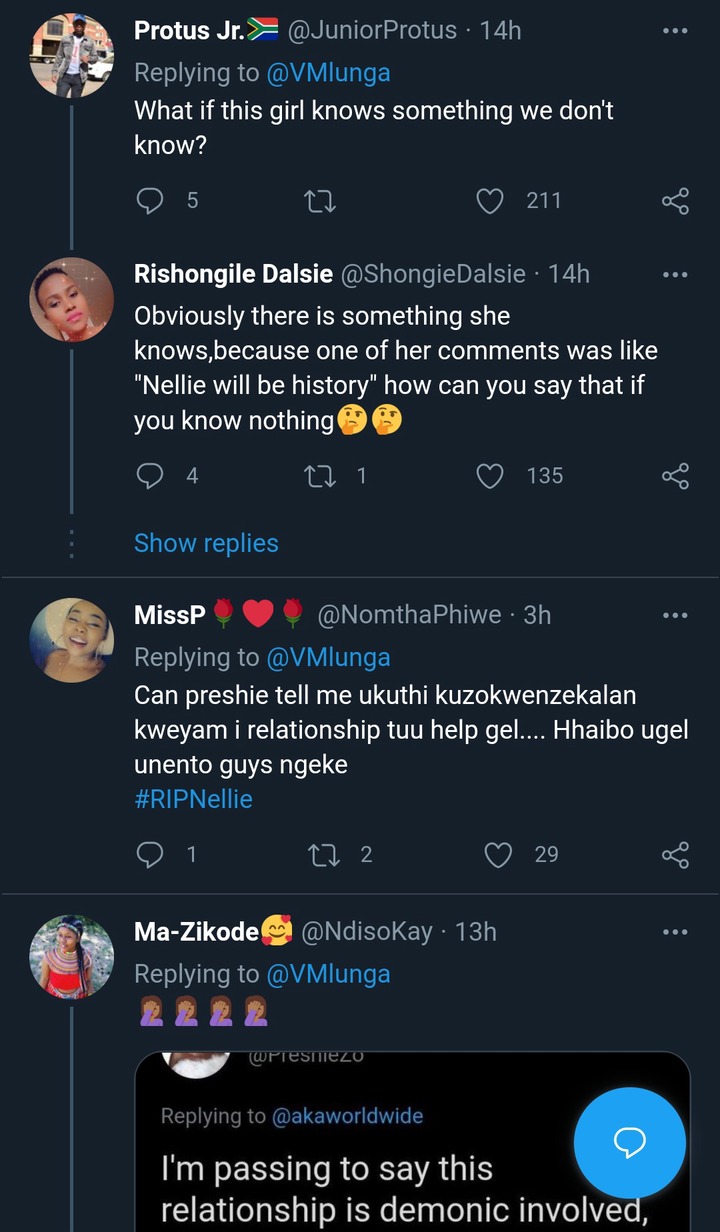 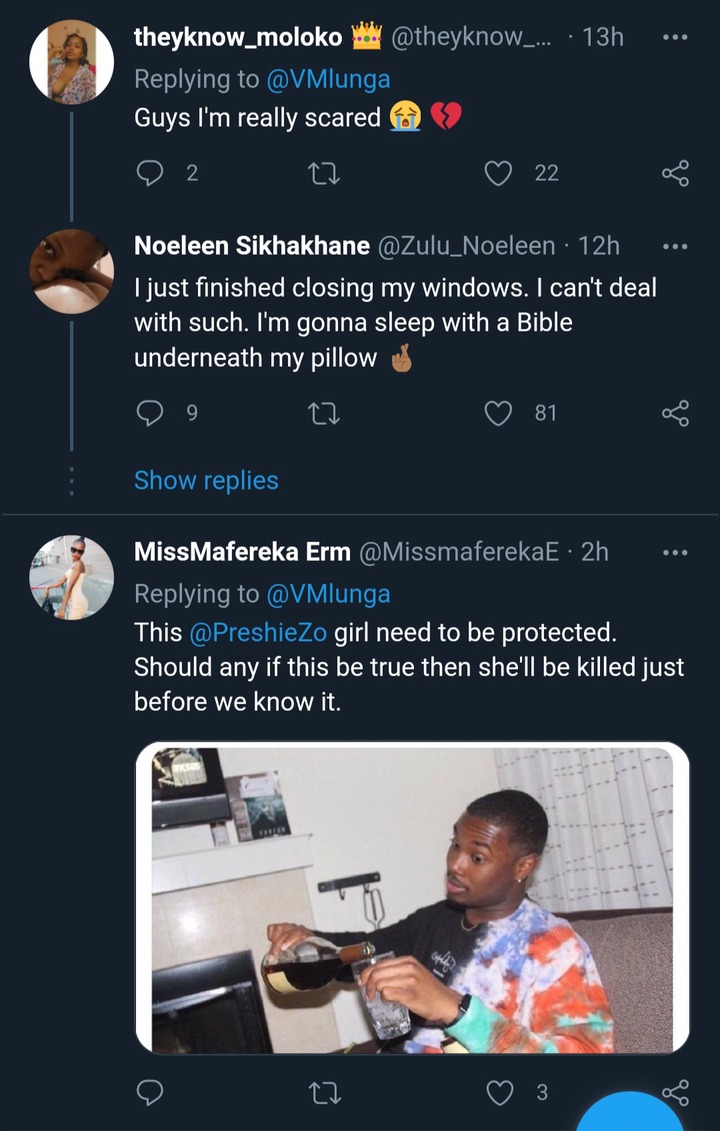 All these revelations coming out only makes one wonder if really it is worth it to be a celebrity. Whay do you think about this?

"I style myself but thank you" Khuli Chana's wife tells fans. Leaving fans speechless with her outfit

How These Mzansi Celebrity Couples Met And Fell In Love

Zolani speaks after Prince Kaybee did her dirty

Mabe:there is no leadership crisis