Robert Marawa And Nonku Williams Explains About Their Relationship 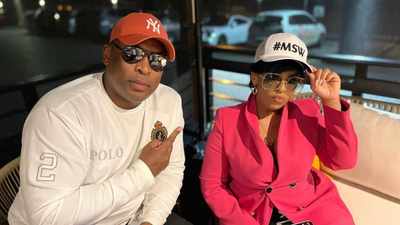 A Durban woman who has made a name for herself on The Real Housewives of Durban , Nonku Williams, says she has been linked with a job with sports broadcaster Robert Marawa.

This follows photos and video showing the two of them sitting at a table enjoying a drink, drinking it as if they were in love.

Nonku, dispelled many speculations while issuing a statement clarifying his relationship with Marawa.

In a statement issued by her manager, Sibahle Ngcobo, he said it was his manager who linked him to Marawa as he wanted him to know more about his wine business.

“Sibahle is the one who introduced me to Robert as I want my wine business to grow. They have known Robert for a long time as they once worked together. I first met him in Durban, at the Easter Polo event, as we were meeting for the second time in Johannesburg, at Standard Bank Polo, ”said Nonku.

She said Robert was a person who wanted to know more about wines.

“I talked to him until he came to help me with ways to improve and there is a wine I will send to him in Johannesburg for people to know. Other than work, there is nothing going on between me and him. We are united by work and we will still work together, I will support him in what he does, and he will support me, ”explained Nonku.

She also emphasized on her Instagram page that they have no relationship other than business dealings.

The reporter tried to contact Marawa, who did not respond to queries.

After their photos surfaced on social media, some suspected that there was a romantic relationship between them. Some have expressed their delight in seeing Robert and Nonku fall in love because they are compatible.

'Perfect Cake For my Drunken friend' A Guy React with the Picture of the Cake, Check the Cake

"This woman just rammed into my car and sped off. Please help me find her." Bonang Matheba posted.

In Shock | Truck Driver Faces Consequences Of Trying To Overtake