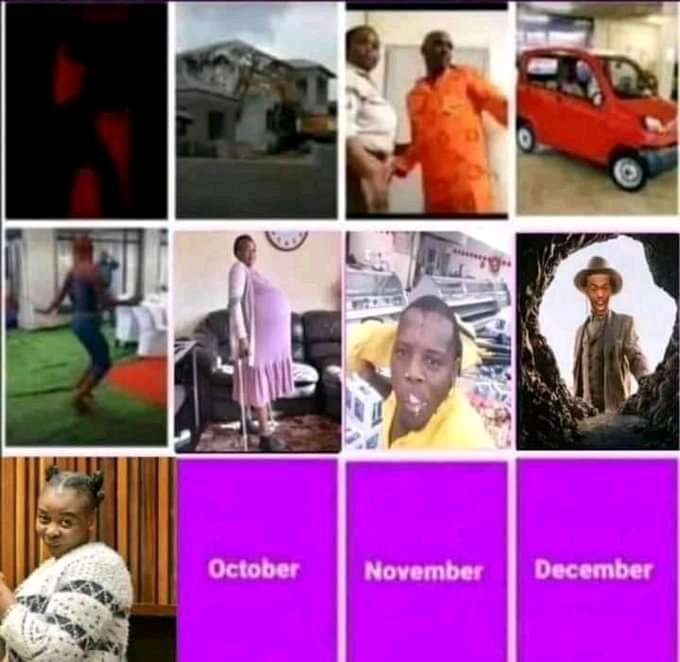 Twitter Users Have Done It Again.Following The 2021 Monthly Most Popular Events That Have Been Happening Since The Beginning Of The Year Till The Month Of September.

If You Missed Some News Then You At The Right Place For An Update:

From The First Frame Representing The Month Of January, We Will Remember The Challenge That Was Taking Place Around The Internet And Most Popular On Tick Tock, On This Video It Encourage Women To Embrace Their Bodies-As A Blood Red Filter Highlight Silhouette(Challenge)

Just On The Month Of February, The Internet And Social Media Users Went To War Following The New Trend That Made Hundreds Of Shares Across Social Media Platforms Where The TLB(Tractor) Was A Problem Solver Between The Couple, Meaning If You Already Built Your Partner A Beautiful House For Her Then Things End In Tears The Guy Would Hire The TLB Tractor And Demolish The House.

It Happened On The KwaZulu-Natal Prison Where The Lady Warder Was Caught on A Camera Having Intimacy With A Prisoner.

The 4-Seater Quadricycle Bajaj Car That Made A Stir To The South African Citizens, Following The Price Money That Shocked Everyone When They Heard That It Only Cost A R5000.00 Cash.

Hilarious Never Seen Before That Moves That were Pulled By The South African Spiderman Giving Us Mind Blowing Dance Moves On Parties, Entertainment Centers And Clubs, Cracked Out Everyone With Laughs.

Earlier The Month Of June Here We Found The Mother Of 10 Babies,Gosiame Sithole Of Which Was Confirmed During The Scan That The Babies Were Only Eight In The Womb.

July The Month Where The Former President Mr Jacob Gedleyihlekisa Zuma Was Arrested And Followed By His Fans Where They Decided To Shut Down KwaZulu-Natal And Gauteng Province by Looting And Vandalizing The Shops, And Here We Found The One Looter Who Took A Video Of Himself Eating A Cake At A Store Violently Like A Dog.

The August Month Was A Long Run Where The iDols SA Judge Somizi Mhlongo AKA Somgaga Got Suspended Following The Major Scandal Of His Ex Husband Mohale Motaung.

Alleged Killer Cop Nomia Rosemary Ndlovu Who Is The Former Police Constable Got Charged With 6 Murderers.

Thanks For Your Time.

Content created and supplied by: Marko013 (via Opera News )