By CaseReview (self media writer) | 7 months ago 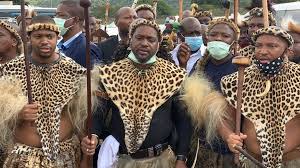 The morning period has just passed as the renowned King of the Zulu nation King Goodwill Zwelithini had passed on. Upon the resting of a great baobaab tree many factions started in the Royal family. The first being who should succeed the King, the passing of his Wife when she was interim successor. Now the conundrum is regarding the cleansing ceremony which happened despite other royal family members not being made aware of this.

The cleansing ceremony includes the late Kings weapons being cleansed in accordance to the Zulu customs and rituals. His weapons include his shileds, spears and guns which needed to be cleansed by all teh necessary people in the Royal family. This is especially inclusive of the current interim King Misuzulu Zwelithini.

Traditional Prime Minister  to the Zulu Monarch and South Africa Prince Mangosuthu Buthelezi, alluded that the cleansing of the late Kings hunting ceremony had been carried without his approval and the approval.

His exclusion includes that of King Misuzulu whos health had deteriorated due a horrible flu that he is suffering from.

Buthelezi held that the very act of defiant members of the family of the Royal household is treacherous. The royal household is supposed to be united and do African rituals as a collective.

This media briefing follows that of Prince Buthelezi whichever as held on Friday the 18th of June 2021.

Prince Buthelezi in the media briefing he had declared that the three month long mourning period for the King was over and gave appreciation to the Zulu nation, and South Africa at large, for giving unwavering supporting the royal family following the king’s passing. He alluded he was not aware of the cleansing ceremony and did not give go-ahead for it.

This prompted a response to this and the following day the Zulu royals had their own media briefing in which the strongly insisted that all members of the family, including the King Misuzulu, had been made aware that the hunting ceremony was going ahead. They held that the Queen Mother Mavis MaZungu was aware of of the cleansing ceremony. 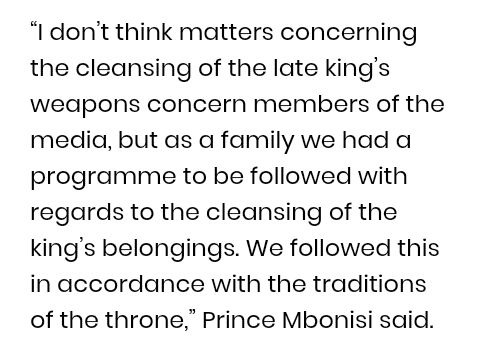 The late king’s daughter Princess Nombuso Zulu told the media that the cleansing ceremonies, including the hunting ceremony, had been a success, with all Zulu royal houses having also been cleansed.

Princess Thembi and Prince Mbonisi, the late king’s sister and brother, were also present at the briefing with Princess Thembi strongly held that there was no division in the family. She alluded that the family speaks with unity. Like all families they just had a difference of opinions but they are still united.

“This thing of sides is troubling me, because this is one family, this is one household, all of these palaces are one household. We don’t look at it as divided, it is only the views that differ within the family,” 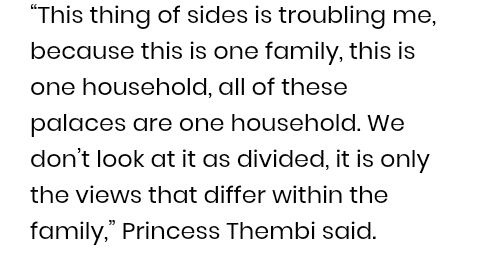 Although King Misuzulu is recognised by Prince Buthelezi, and the late Queen Regent Mantfombi Dlamini Zulu’s will, as his late father’s successor to the throne, Prince Thembi said that Buthelezi does not have appointing powers and that there was an appointing structure within the family.

Shedding more light on this matter of appointing for the next King Princess Thembi held :

“We will follow the South African Constitution which declares how a king is appointed and how. We have an appointing structure in the royal family, that one who was speaking (Buthelezi) does not have power to appoint."

She ironed out all opinions and rumours that that it is common cause that her an her brothers are seen as straight out rebels for going against King Misuzulu’s appointment, they did not intend to have a tight of war fight. Instead they had intentions to to speak with unity as one family.

“Once the king is appointed, he will be above us all, he must look at us in the same view,”

She also noted that the morning period is over therefore the royal family will engage in discussions on the way forward regarding who will be the successor to the throne.

IOL is one of the leading media houses in South Africa. IOL stand for Independent Online, is a news and information company which was the formerly owned by Independent News & Media organisation, which is the largest publisher of print material in South Africa. It was then owned by Sekunjalo Investments in 2013.

Content created and supplied by: CaseReview (via Opera News )

Wife murders husband because he impregnated another woman.

Son of Rosemary Nomia Ndlovu; a 13 year-old; to be exhumed because she may have murdered him.

Man attacked by community members because of married woman

Hair Dye Is No Longer Necessary. This black water will make your gray hair vanish for good.