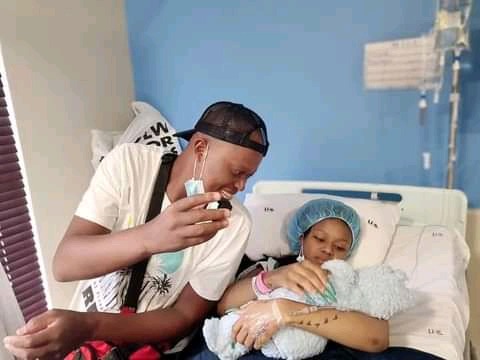 Congratulations are in order for the Maphumulo newly weds as they are now the new parents. Joy and happiness was written all over the faces of both Mampintsha and his wife, Babes Wodumo as they welcome their new born baby.

Giving birth on such a prestigious holiday, Youth day, is something that is so wonderful as the youth day, June 16 is such a historic holiday ever, which is indeed a bonus to this new couple who are also youth. Babes Wodumo, whose real name is Bongekile Smelane Maphumulo and her husband, Mampintsha Mandla Maphumulo were beyond the moon and very ectsatic to be the new parents.

Earlier on this day, the two kwaito singers tied a knot in a traditional wedding held at Umhlanga as they are now official husband and wife. Their wedding was recorded in Showmax as the broadcasting rights were sold to them. Babes Wodumo and Mampintsha have a reality show that is called Uthando Lodumo and it is produced by Parental Advisory.

The birth of their son also will be shown to this show as it is a very incredible thing ever to happen. The two love birds have been through a lot in their relationship which now they have more reason to celebrate all the good things in their marriage including the birth of their first born son.

Their wedding was followed by a drama as Babes Wodumo's mother in law, caused a havoc when she made a video and dropped on how the two newly weds excluded her from the wedding. She even went on to say that Babes Wodumo is not the bride of her house, she disown her. Mampintsha's mom was under the influence of alcohol when she made that video which went viral on social media. She even said that Babes is not carrying a baby but a sponge. She also said that she will give birth to a cat. However, she apologized shortly after she was sober.

The love affair of the Maphumulo family is known to be filled of nothing but drama from the time they were dating. The two use to fight a lot and even seperate but they always got back together. It will be remembered some few years back, a viral video that trended on all social media when Mampintsha assaulted Babes Wodumo, little did he know that she was recording the whole altercation.

Mampintsha was heard in a video telling Babes Wodumo to behave and not make noise as there are children in the house. It is understood that they were at the home of Mampintsha. This couple is known of making music with whatever happens to them as they did not waste anytime but rushed to the studio to record a song singing about children present in the house. The lyrics were like "khona ingane landlini", which translated like there are children here.

Against all odds, they loved each other and continued to conquer all, as it was proven when Mampintsha proposed to Babes Wodumo last year at Gagasi FM studios. Mampintsha and Babes had visited an afternoon drives how called, That Drive, which is hosted by Warras and Nomalanga. He went down on his knee and surprised Babes when he poped the question in surprise as asked Babes if she would marry him. She did not waste any moment as she agreed and happily said yes.

The lobola negotiations happened earlier on this year as it was postponed last year because of the lockdown. It was also recorded in their reality show, Uthando Lodumo.

Their fans took to social media to share with them their excitement and congratulate them on being new parents.

Did Ghost Hlubi go too far with his pranks? He took Seemah's phone on video

Mother falls on top of her baby: This is what happened

"Lerumo" from Scandal celebrates 14 years in marriage with wife