17 celebrities who are happily single 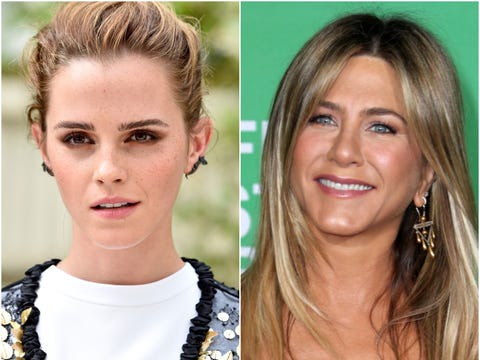 Both Emma Watson and Jennifer Aniston are happy just as they are — single. Pascal Le Segretain/Getty Images/Jonathan Leibson/Getty Images

When Emma Watson spoke to Vogue in November 2019 about the societal pressures leading up to her 30th birthday, she coined the now-viral term "self-partnered."

"I never believed the whole 'I'm happy single' spiel," she told Vogue. "I was like, 'This is totally spiel.' It took me a long time, but I'm very happy [being single]. I call it being self-partnered."

But the British star isn't the only celebrity who's made it clear they love the single life.

Emilia Clarke, Halle Berry and Chelsea Handler have all discussed how empowering it is to stand on your own and focus on one's own personal desires and achievements.

And while fans are speculating on an imminent rekindling of Jennifer Aniston and Brad Pitt'srelationship following their SAG Awards catch-up, Aniston has repeatedly said in interviews that she's happily single.

So for the single men and women out there who need some inspiration, Insider has rounded up 17 A-listers who have said they're living their best single life.

"... I was like, 'This is totally spiel.' It took me a long time, but I'm very happy [being single]. I call it being self-partnered.

"We get to decide for ourselves what is beautiful when it comes to our bodies. That decision is ours and ours alone."

Mindy Kaling says she doesn't "need anyone to take care" of her. Presley Ann/Patrick McMullan via Getty

In a 2014 issue of InStyle UK seen by E! News, Emilia Clarke said: "People keep asking me who I'm dating right now and the truth is… wait for it… no one.

"And that's OK. I'm figuring out a lot of stuff right now. I think as a woman it's in our nature to nurture someone else. Sometimes at the expense of ourselves."

Drew Barrymore wrote in her memoir "Wildflower": "It's ironic that we rush through being 'single' as if it's some disease or malady to get rid of or overcome.

"The truth is, most likely, one day you will meet someone and it will be gone. And once it's gone, it's really gone! Why does no one tell us how important it is to enjoy being single and being by yourself?"

Chelsea Handler said, "being single is delightfully more than it's cracked up to be."Emma McIntyre/ Getty Images

Chelsea Handler told TIME magazine in 2016: "Without single women and their impressive sense of self, we'd be without Queen Elizabeth I, Marie-Sophie Germain, Susan B. Anthony, Florence Nightingale, Jane Austen, Harper Lee, Diane Keaton, Greta Garbo, Jane Goodall and me, myself and I.

"Being single is delightfully more than it's cracked up to be … if you can stand the horror of your own company, that is."

Halle Berry's metaphor for a man is "the cherry on the pie." Getty/Amy Sussman

According to Glamour magazine, Halle Berry once said:

"A man for me is the cherry on the pie. But I'm the pie and my pie is good all by itself. Even if I don't have a cherry."

For Glamour magazine's 2019 Woman of the Year issue, Charlize Theron said: "I haven't been in a relationship for a very long time. I never wanted to get married.

"Those are things that are not hard for me because they're innately my truth. I find people are somewhat perplexed by that, and also more with women, right?"

In an interview with Calvin Klein in 2016, Kendall Jenner said: "A strong woman is independent and doesn't need a man. She can walk into a room by herself and not be bothered."

Terri Hatcher told People in December 2019: "Many women who get divorced will not get remarried. That kind of sounds depressing but it doesn't have to be.

"Many women are not just surviving alone, they're thriving. They're empowered, they're making money, they're being healthy, they're traveling.

"You are allowed to be proud of your life when you're not part of a couple."

In a 2017 issue of Red magazine picked up by People, January Jones said: "Do I want [a partner]? Maybe. But I don't feel unhappy or lonely.

"It would have to be someone so amazing that I would want to make room. Someone who would contribute to my happiness and not take away from it."

Hailee Steinfeld told Harpers Bazaar in 2017: "I mean, there's always time for dating. I do feel that right now though – and I hate saying this – my top priority is what I'm working on. It's that and family, and then everything else."

Susan Sarandon spoke to Reuters in 2012 and said: "[Single life] has been a lot of different things. It's traumatic and exhilarating. The one thing that's been really clear to me is that you have to think of your own life and your relationship and everything as a living organism.

Diane Keaton told The Independent in 2014:

"I remember when I was young I honestly believed in some ridiculous way that you would find someone who would be the person you lived with until you died. I don't think that because I'm not married it's made my life any less.

"That old maid myth is garbage."

Sophia Bush said you need to be a "complete person" before getting into a relationship.Presley Ann/Getty Images

Sophia Bush told US Weekly in 2012:"I don't think you can really, truly be the partner you want to be until you know on an absolute level that you are a complete person on your own. I think that's something all women deserve to know."

Selena Gomez's most recent public relationship was with The Weeknd who she split up with in 2017. Jon Kopaloff/FilmMagic

Selena Gomez told "The Zach Sang Show" in October 2019: "I've been super, super single for two years and I want to know what the love will look like next for me. I want it to be real, and I don't want it to be codependent or messy or [have] a lack of communication.

"I think when you get older, you find people that are actually right for you."

According to Metro, Niall Horan told Teen Now in 2014: "Being single means you're strong enough to wait for what you deserve."

Love Is In The Air. See All The New Celebrity Couples Of 2022.