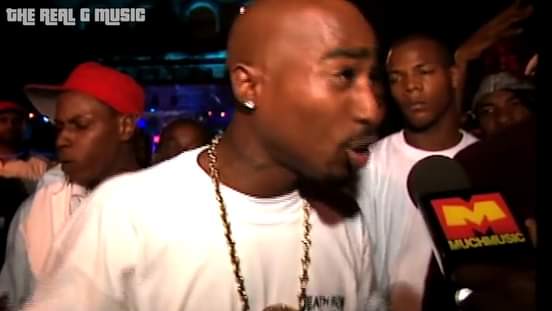 “ We out here trying to help our people make money. We're trying to get out of this three strike circle they got us in and start getting our papers on. So that's what we're doing. By strengthen numbers we're coming to the East Coast to prove there is no fear. There is no problem. There ain't nothing but opportunity and opportunity is overthrow the government y'all got right now which is Bad Boy and Nas and all that bullshit and we will bring a new government here that will feed every person in New York. " - 2PAC with MUCH, September 4th, 1996.” 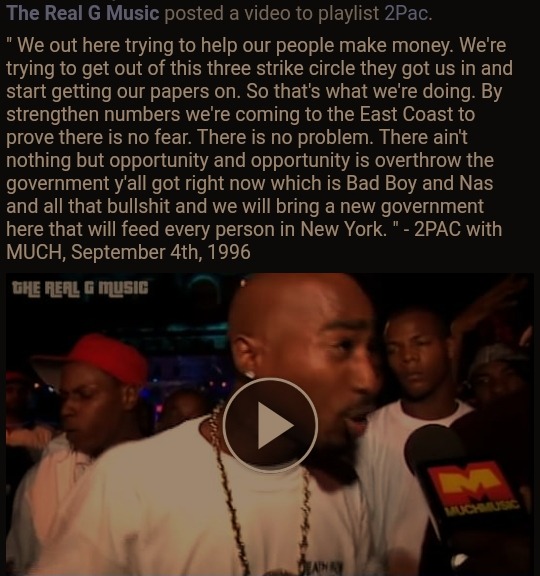 There will never be another Pac! Such a talent lost forever. Pac was so much more than a rapper! He was a bright and knowledgeable man, a revolutionary of his time! Pac wanted way more out of life than what he had, and would have made a huge impact on this world in so many ways.

Deathrow is the worst thing that ever could have happened to him. Suge was a snake and nothing more than that! Pac died nearly broke because of suge even after all the money his albums made!! Suge had Pac killed, I don't care what anyone says! He was behind it all. Rest up Pac.

Tupac Amaru Shakur, born Lesane Parish Crooks, was known to be one of the best rappers of all time. He died on September 13, 1996 in a drive-by shooting after attending one of Mike Tyson’s fights. But did he actually die? Since his death was so sudden and he was such a big celebrity, many of Tupac’s loyal fans entertain the idea that his death was a coverup. There are a plethora of rumors circulating the internet on the status of Tupac, where he is, and what he is doing. Such reports include an attempt to cover-up Tupac’s own death to leave fame behind, multiple hideouts where Tupac may be living, and hidden clues he has left behind. With new reports still coming out after 22 years, information on the conspiracy theory can be found all over the internet, but a specific article written by Tom Connick of NDE compiles all the stories together.

Tupac was known to have a strong personality and constantly clashed with others. He was involved in the East Coast versus West Coast rap rivalry that occurred during the 1990s and had many enemies as a result. He was considered a prominent hip hop artist and is known to be one of the best-selling music artists of all time, with much of his music discussing contemporary issues. Considering he was an activist that also dealt with legal troubles, people assume that his death was strategically planned. One of the most popular theories behind Tupac’s death is the Machiavelli-Kasinova theory, stating that Tupac faked his own death because he was inspired by the philosopher Niccolo Machiavelli, who favored the notion of faking one’s death to gain advantage over his or her enemies. The rapper eventually changed his stage name to Makaveli, which references the philosopher and is an anagram of “AM ALIVE K”. The K in this anagram is thought to allude to a present-day rapper named Kasinova The Don, who vocally compares to the likes of Tupac. Furthermore, Kasinova The Don released a song called Mystery that contains lyrics that allude to Tupac and his faked death.

A second mainstream theory is that Tupac is living in either Malaysia or Cuba. Several doctored images, such as Tupac partying with Rihanna, have been released to fuel this rumor. Furthermore, Tupac’s aunt is said to have moved to Cuba after receiving asylum for her political activism in the United States, so he may be living with her. Suge Knight, the founder of Death Row Records, was with Tupac when he died; this man doubts Tupac’s death because he said it seemed like Tupac was getting healthier the last time he saw him, so he must be on a beach “smoking a Cuban cigar” at the moment. Furthermore, Suge Knight’s son used vague evidence to assert that Tupac is currently living in Malaysia, such as screenshots of text messages and an image of Tupac supposedly with 50 Cent and Beyoncé. Though it has been incredibly difficult finding articles attempting to disclaim the conspiracy theories, an article by Gabby Hart depicts an officer’s recollection of the shooting and Tupac’s last words as the officer held him in his arms. It was also said that much of the community knew the culprit behind the shooting was Orlando Anderson, who was murdered shortly after he killed Tupac. In addition, Snoop Dogg answers in an interview that the conspiracy theory claims make for good press and entertaining television, but that his good friend is truly resting in peace. The rapper also believes that Tupac’s prodigious legacy makes people want to believe that he is still alive, so they continue to fuel the theory even though it has been over twenty-two years since his death.

There are multiple cognitive contributions that add to the belief that Tupac is not dead. Firstly, the use of irrelevant conclusions is relevant for a majority of the theories. People assume that because the killer has never officially been identified that one can assume that Tupac never actually died in the first place, which does not make any sense. Secondly, Tupac’s obsession with Machiavelli and the anagram behind Makaveli are used as a basis to sustain the idea of Tupac faking his death and there is no concrete evidence substantiating the significance behind either. Moreover, the media plays a huge role in fueling confirmation bias because they only discuss information that adds to the conspiracy theory, purely because it is more entertaining to read about. Affirming a conclusion from a negative premise is also relevant because one of the main arguments is that the person who was sitting next to Tupac, Suge Knight, did not get hit even though Tupac did, therefore Tupac could not have died. Lastly, cognitive dissonance plays a role in keeping the conspiracy theory alive because fans do not want to believe that the famous rapper could have actually passed away. These people find evidence that strengthens their desire for Tupac to still be alive (the media or sporadic claims that he is living in Cuba or Malaysia) giving them a reason to remove any cognition that suspects his death is real. These people are definitely misinformed because there is no actual physical evidence that would allow people to jump to this conclusion, there are only photoshopped photos, vague elements that are given meaning, and unproven claims made by other celebrities.

The community of believers originates from both fans as well as conspiracy theorists who want to believe in something so extraordinary. Their beliefs are sustained through the use of social media and new articles coming out constantly. In addition, people are easily fooled and are willing to believe anything they read online, such as doctored images. All in all, the Tupac conspiracy theory has been circulating for twenty-two years, but there is no credible evidence that proves it to be true. The reason the conspiracy theory may have been created in the first place is because of the controversy Tupac was surrounded by during his life and his strong fan base creating connections that allude to anything other than death. None of the premises have strong foundations that lead to real conclusions, and both cognitive dissonance and confirmation bias play strong roles in keeping the legend alive.

I find it so interesting how people make some many conspiracies about celebrities. I think this really just has to do with people wanting to believe he is still alive because their admiration for him. So, they make stories hoping he’ll appear one day and be able to show that they were really loyal to Tupac. The whole thing with Tupac and Niccolo Machiavelli, I feel like why could he just no be interested in this topic?

What if he took inspiration from this and interpreted it in his own way. It seems people have so little to work with so they gather one “solid” evidence to show case how they are correct.