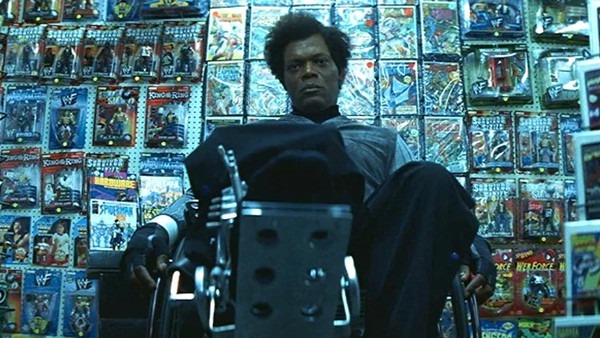 M. Night Shyamalan's Unbreakable, like Scream, attempted to play with genre conventions by presenting a totally different kind of superhero film - even before fans realized it was a superhero film at all.

The story centres around David Dunn (Bruce Willis), the solitary survivor of a train catastrophe that killed 131 people, who meets Elijah Price (Samuel L. Jackson), a brittle-boned man who believes the "unbreakable" Dunn must be his polar opposite - an invincible superhero.

And, as the film approaches its conclusion, it appears that no major antagonist has been identified:

Except, as the film progresses, it is revealed that Price was responsible for a number of high-profile incidents, including the opening crash, in the hopes of finding an unharmed solitary survivor to serve as his polar opposite. David must be the superhero if he is the supervillain.

Though Price, who eventually goes by his childhood nickname Mr. Glass, was clearly quirky throughout the film, those last minutes radically flip the script, revealing that he's killed hundreds of people in his search for what he considers to be his heroic counterpart.

It's the most rewarding, and surely the most terrifying, of all the Shyamalan twists (in a good way, at least). 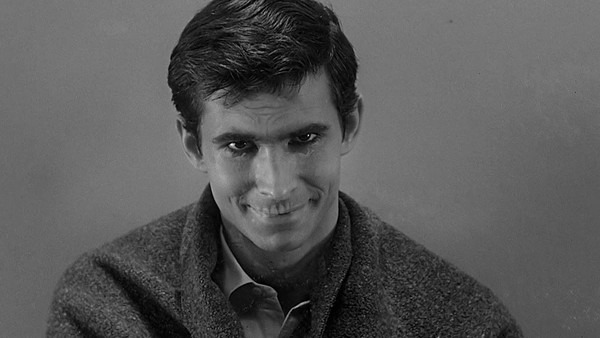 The devious villain reveal in Alfred Hitchcock's iconic horror classic Psycho may be one of the worst-kept plot secrets in film history, but there's no doubting the picture's delightfully sneaky nature.

The spectator is led to assume that the psychopathic assassin who murdered Marion Crane (Janet Leigh) and others is the insane mother of the soft-spoken, courteous motel manager Norman Bates for the majority of the film (Anthony Perkins).

For one thing, the dark figure resembles a woman, which makes it all the more surprising when it's revealed that the killer is none other than Norman himself in the film's final moments.

Norman, it turns out, had murdered his mother a decade before and had taken on her demeanor, including dressing in her clothes and speaking in her voice.

Despite the fact that the film's big shock has been mocked to death, there's no doubting its startling genius, especially for the time period.

This also makes re-watching the film a lot of fun, because Norman's charming demeanor takes on a whole new meaning once you know his actual character.

Hitchcock was so concerned about viewers revealing the ending to others that he demanded that they not do so, and even ordered theater chains not to let latecomers into the theater. 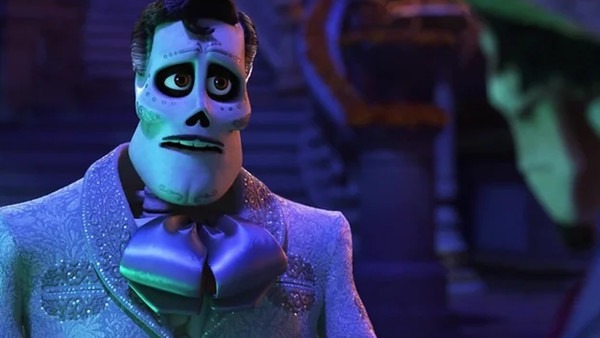 Both Disney and Pixar have a habit of hiding their final adversaries in plain sight, to the point where it's a little boring and predictable.

However, it is later revealed that Ernesto is a forger who stole hit songs from the real genius - and Miguel's actual great-great-grandfather - Hector (Gael Garca Bernal) after poisoning him.

It's not your run-of-the-mill shock villain twist; instead, it deepens Hector's character development by transforming him from a charming trickster to a genuinely sympathetic, even tragic hero.

We should all know by now to be suspicious of any non-protagonist character in an animated film, because there's a good chance they'll kill someone. 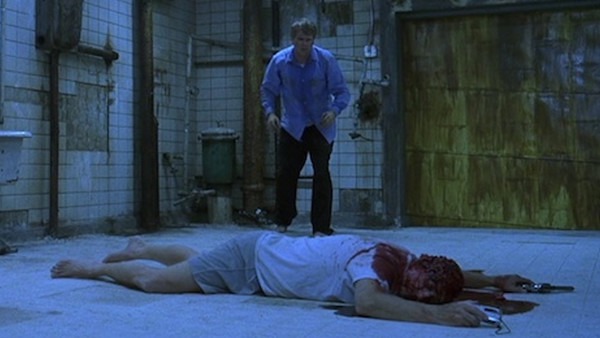 The original Saw's final murderer reveal epitomizes the phrase "hiding in plain sight," with the conclusion showing that the murderous mastermind known as the Jigsaw Killer had been feigning death in front of the protagonists the entire time.

Dr. Gordon (Cary Elwes) and Adam (Leigh Whannell) awaken in the filthy bathroom where they've been held captive, only to discover a body in the middle of the room: a dead guy who appears to have blown his own brains out due to the poison coursing through his veins.

Except, in the film's last scene, this "corpse" appears, revealing everything to be a wonderfully complicated ploy, before proclaiming himself as Jigsaw (Tobin Bell) and trapping Adam in the bathroom to his destiny.

As preposterous as the reveal is - particularly, how incredibly still Jigsaw manages to sit for literally hours - it nevertheless strikes a genuinely shocking blow, and the movie concludes on a "Holy s**t!" note.

Many sequels have attempted to equal the first film's legendary shock value, but none of them have succeeded. 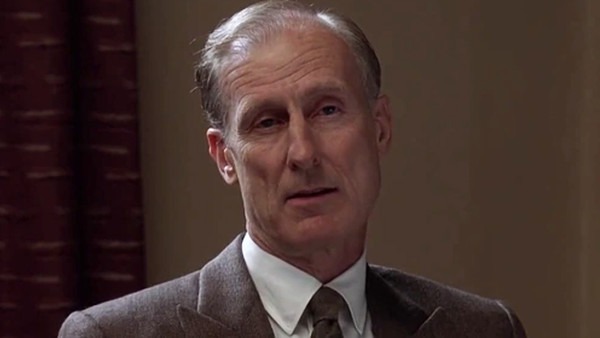 L.A. Confidential is one of Hollywood's all-time great film noirs, and it boasts one of the genre's most stingingly brilliant villain revelations.

James Cromwell, who won a Best Supporting Actor Oscar nomination a few years ago for his sweetly endearing portrayal as farmer Arthur Hoggett in Babe, was cast as steely, corrupt LAPD Captain Dudley Smith in this film.

Even if you accept the character's dubious law enforcement methods, few could have predicted that he'd turn out to be the main antagonist of L.A. Confidential.

Far from being a corrupt cop happy to break few eggs in order to clean up L.A., he aspires to be the city's new drug lord, and the LAPD covers up his villainy to protect their own image, even after he's slain by Exley.

Nobody anticipated Smith to be pure human trash, given Cromwell's predilection for playing lovable, grandfatherly characters. 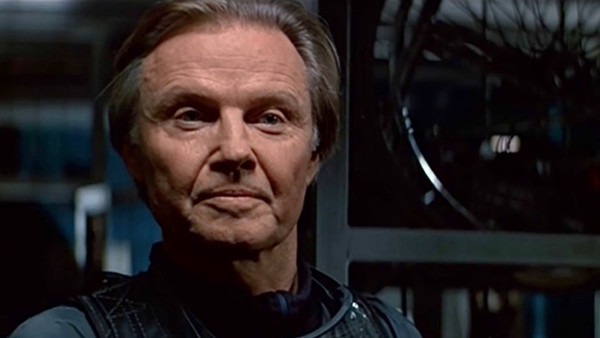 The final act of the first Mission: Impossible has a great but divisive villain reveal, with the twist that famous IMF director Jim Phelps (Jon Voight) is also the film's main antagonist.

Phelps, along with several other members of his team, appears to perish in a botched Prague mission at the outset of the film.

However, it was eventually revealed that during the Prague mission, Phelps faked his own death and orchestrated the murder of several of his own men, having grown tired of the IMF and decided to sell it out.

Given that Phelps was always a heroic character in the original TV series, the disclosure was incredibly startling because it played perfectly off audience expectations.

Many fans were outraged that Phelps' allegiance had been so suddenly switched, but if nothing else, the public expectation that Phelps would never turn heel just added to the beauty of the eventuality. 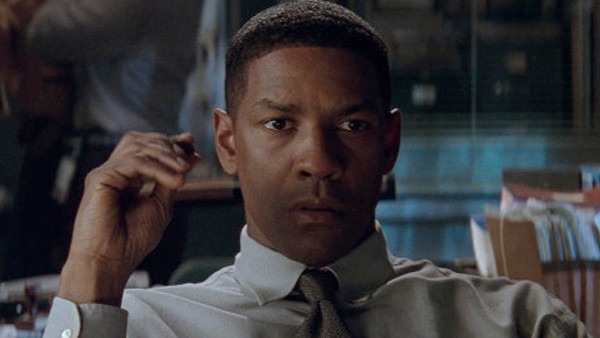 This cult classic thriller starring Denzel Washington from 1998 may be a touch rough around the edges, but it gains greatly from a brilliantly cunning final twist that completely changes what we thought we knew.

The supernatural detective film begins with a quotation from protagonist Detective John Hobbes (Denzel Washington), who says, "I want to tell you about the time I almost died," while a clip of Hobbes on the point of death is displayed, plainly implying that the scene is from the end of the film.

While the moment we see is from the movie's last scene, the context of this phrase is ultimately different.

Hobbes discovers that Detective Jonesy (John Goodman) is possessed by the fallen angel Azazel, and in order to prevent Azazel from taking up a new host, he kills Jonesy before smoking a poisoned cigarette and dying himself, leaving Azazel trapped in the wilderness in a dead corpse.

Except, as the voiceover resumes, we realize it wasn't Hobbes at all, but Azazel, who possessed Hobbes in his final moments, just as he's about to die - as shown in the movie's opening scene.

As a result, it was Azazel who came close to dying, not Hobbes. Azazel manages to control a neighboring cat at that point, implying that he will return to civilization in order to possess another person. Yes, the wicked man was victorious.

It's a brilliant twist that completely transforms the meaning of the opening segment by having the villain talk to a blissfully unknowing audience while pretending to be the hero. 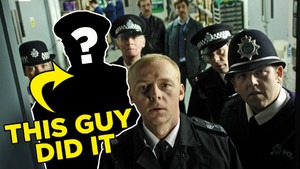