Angie Motshekga still has the report on matric leaks from last year.

By Mvelase (self media writer) | 2 months ago 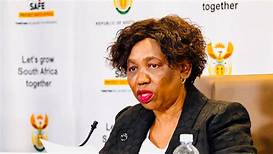 The extended time it took to do a forensic examination on students' smartphones prompted the delay in finalizing a report into last year's matric test leaks. This is what the department of basic education recently notified parliament's portfolio committee on basic education after it sought a copy of the study.

According to TimesLIVE, Angie Motshekga, the minister of basic education, got the final report of the national investigative task force on August 24. In an update to the committee, Motshekga stated that she will send the report to them after she has "engaged and signed off" on it. However, it seems improbable that it will be made public before the end of the year. The portfolio committee's head, Bongiwe Mbinqo-Gigaba, acknowledged to TimesLIVE that the report will not be addressed this year since the committee's schedule is "extremely busy." The maths paper 2 and physical science paper 2 were leaked to certain students via WhatsApp before they could take the examinations last year. During a briefing to parliament on matric exam readiness on Tuesday, the department's chief director for public exams and assessments, Rufus Poliah, stated that for the first time this year, students were required to record the details of their cellphone in an electronic devices register.

"We thought this was necessary simply because one of the weaknesses in our investigation last year was that it was difficult to get the devices in because this had to be a voluntary submission." "We believed that by registering these technological gadgets, we would have some control over their administration." Outlining additional test security procedures, Poliah stated that it was now a necessity that a senior departmental official be present whenever question papers were printed. "We learned from our past mistakes." He stated that they demanded that all workers, including outsiders and those nominated by the department, be vetted. "As a result, no official or outsider from a service provider will be present at a printing venue or distribution location unless they have been verified."

He stated that a number of students did not submit their "primary" device, but rather a second cellphone or a phone with information deleted. "As a result, no official or outsider from a service provider will be present at a printing venue or distribution location unless they have been verified." We installed extra safeguards to ensure that the problems that caused leaks last year do not reoccur."

Poliah stated that if a cellphone rings or a student is caught in possession of a cellphone, "it is viewed as an irregularity and results would be annulled." Meanwhile, ANC MP Walter Letsie informed parliament that most pupils are detected cheating within the test room by invigilators. "I beg you to attempt to capture them before they enter the classroom." I'm not sure whether our laws allow it, but I'd want to conduct a thorough check of these students as they approach the test room to remove the likelihood of them intending to cheat."

However, Mafu Rakometsi, the CEO of Umalusi, believes the constitution may prohibit body searches since they are an invasion of privacy. Hugh Amoore, the chair of the national inquiry task team, disclosed in February that the investigation determined that the leak of the two papers originated from, first, an employee of a business hired to print matric examinations and, second, someone at the Government Printing Works. He stated that the inquiry into the stolen maths paper 2 discovered that a total of 235 matric students were in WhatsApp discussion groups where questions from the test — or the entire exam — were exchanged.

In the instance of physical science paper 2, the exam or sections of the exam were assigned to groups of just 62 students. However, he stated that there was no guarantee that the papers would not be distributed beyond these students. Themba Daniel Shikwambana, 31, appeared in the Johannesburg magistrate's court in January after being detained by the Hawks in November last year for the theft of the 2020 maths paper 2. He worked for a Johannesburg-based company that had been hired by the Department of Basic Education to print the 2020 matric exam papers. According to Elijah Mhlanga, spokesperson for the Basic Education Department, the report has now been approved for submission to the portfolio committee.