SAD NEWS : A Student Was Knocked Down By A Teacher's Car Inside The School. 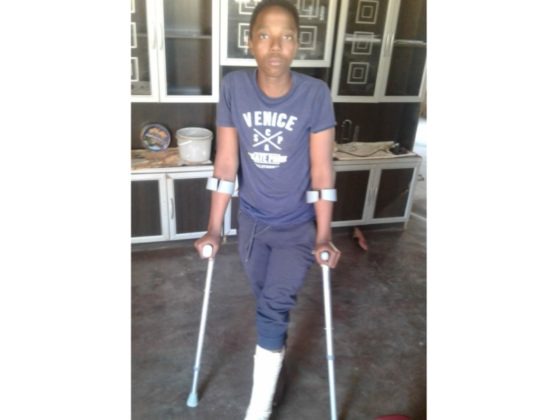 A Grade 8 student broke his leg after being hit by a teacher at a school.

After that, the teacher gave Sibongiseni Jokoze a bribe of R250 and failed to report the incident to the boy's family.

Now, Sibongiseni's family blames him for not regretting the incident.

Sibongiseni was reportedly injured inside the grounds of OR Tambo High School in Dennilton, Sekhukhune on the first day of July 26.

Since the incident, he has been forced to miss several classes due to pain in his left leg which had to be covered with concrete.

Even after the concrete was removed, Sibongiseni was forced to walk two kilometers to school using crutches.

According to Sibongiseni's mother, Clara, she was standing in line for an injection when the teacher, who is said to be a student driver, hit her with her car.

Clara said the teacher had never shown any remorse since breaking her son's leg.

“I was introduced to one of the students, who told me that my son had been hit by a car at school. When I arrived, I was told that he had been taken to Philadelphia Hospital by ambulance. No one at this school has ever bothered to accompany my child to the hospital ”.

He said someone in the hospital approached him and told him everything was fine.

“This person advised me not to file a case with the police and promised to help me with the Road Accident Fund application. That person is nowhere to be found, now I have a problem filling out forms ”.

Clara now seeks justice for her son, but does not know where to begin.

“I need help with this. I want to hold this teacher to the police to pay for what he did. Now I am busy filling out RAF forms because I don't know how to complete them, ”he said.

Tidimalo Chuene, a spokesperson for the provincial education department, said the matter should be handled by the police even if it took place on the school premises.

Cassper is the most dragged celebrity because of this

Is This Actually True? See the top 8 SA celebs who are actually not original South Africans

Boohle makes a revelation about Casper on Podcast

Are You His Priority or Is He Too Busy to Love You?

Growing up I used to love art and drawing, today here I am pursuing a dream in make up

Opinion - This moment of history cannot be forgotten easy, 20 years ago